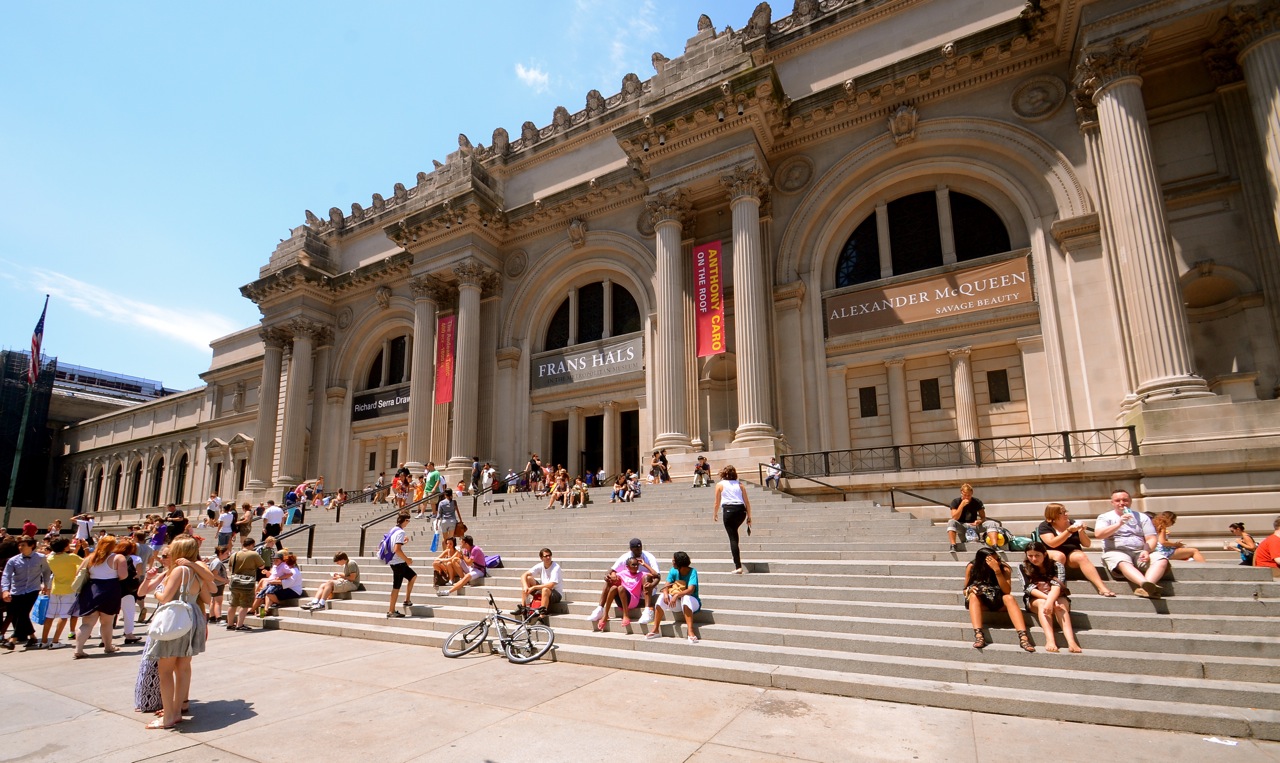 [dropcap]T[/dropcap]he MET is one of the world’s most respected and most visited museums.  Located conveniently at 1000 5th Avenue and 82nd Street in New York, only a stones throw from Central Park, the Guggenhiem,  the American Museum of Natural History and the Hayden Planetarium makes it a must see on every tourists list.  Of course for us,  the MET is the  crown jewel of  New York’s Museum Mile and is why it appears on everyone’s list for being one of the top 3 or 4 of the world’s most popular museums. When one thinks of this list, many would of course think of the  Metropolitan Museum of Art , the Louvre, the Egyptian Museum, the Vatican Museums, and then all the others will follow.  The MET’s position on various lists will vary from the number one position to the number 4 depending on who put this list together, but all will agree that it deserves one of the top positions. On many lists I found, you will also see the Museum of Modern Art, also known as MoMA.  MoMA is another one of my favorites and is also in New York City and a must visit attraction.

I often speak to neighbors, or those that have lived in New York or New Jersey for many years, about all the wonderful and cultural places one can visit living in our geographic area.   I am amazed however when I find out that many of these people have never been to the MET.  Yet these same people will admit to travelling to many international destinations and boast of their visits to less impressive museums.  I suppose we never appreciate what is in our own backyards.  It is for this reason and of course many others, I was compelled to share my personal love affair for this wonderful institution.

“The Metropolitan Museum of Art was founded on April 13, 1870, “to be located in the City of New York, for the purpose of establishing and maintaining in said city a Museum and library of art, of encouraging and developing the study of the fine arts, and the application of arts to manufacture and practical life, of advancing the general knowledge of kindred subjects, and, to that end, of furnishing popular instruction.” [1]

“The mission of The Metropolitan Museum of Art is to collect, preserve, study, exhibit, and stimulate appreciation for and advance knowledge of works of art that collectively represent the broadest spectrum of human achievement at the highest level of quality, all in the service of the public and in accordance with the highest professional standards” 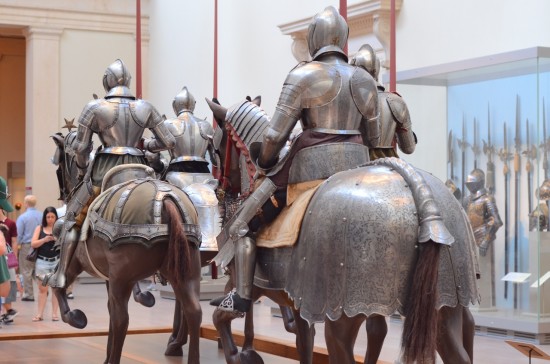 Here is a museum that has kept true to their mission for over 140 years.  Open six days a week (closed on Monday) and open late on Friday and Saturdays during the pleasant months this museum has become a favorite for New Yorker’s and all its visitors. Always new and exciting exhibits from Art to Armor, it is a cornerstone of culture and a must see for everyone.

Their website has so much information including current and past exhibits that I would encourage you to visit it and spend some time, it is enjoyable, entertaining and informative.  Now this article was not to be a review of the museum but rather a recommendation and some comments about one of their most successful exhibits, which I was fortunate enough to view.

My wife and I decided a trip to the city (we live in New Jersey) would be nice and she had heard good reviews on the Alexander McQueen exhibit Savage Beauty.  Not being up on the couture fashions or Mr. McQueen’s accomplishments I decided to read a bit more about his life, achievements, tragic death and the exhibit before I went.

On their web site there was a special section devoted to the exhibit and Mr. McQueen and I am providing a link there which I would urge you to visit.Click Here Now 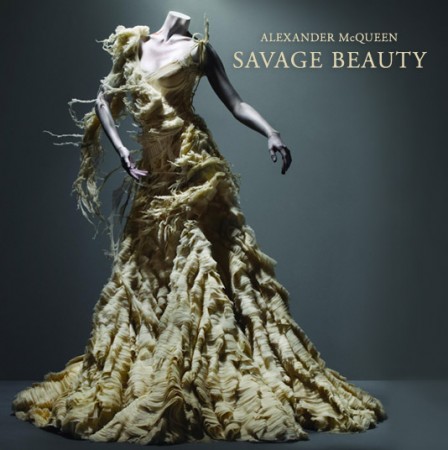 This exhibition was organized by The Costume Institute and celebrates the late Alexander McQueen’s extraordinary contributions to fashion. From his Central Saint Martins postgraduate collection of 1992 to his final runway presentation, which took place after his death in February 2010, Mr. McQueen challenged and expanded the understanding of fashion beyond utility to a conceptual expression of culture, politics, and identity. His iconic designs constitute the work of an artist whose medium of expression was fashion. The exhibition features approximately one hundred ensembles and seventy accessories from Mr. McQueen’s prolific nineteen-year career.

Drawn primarily from the Alexander McQueen Archive in London, with some pieces from the Givenchy Archive in Paris as well as private collections, signature designs including the “bumster” trouser, the kimono jacket, and the three-point “origami” frockcoat are on view. McQueen’s fashions often referenced the exaggerated silhouettes of the 1860s, 1880s, 1890s, and 1950s, but his technical ingenuity always imbued his designs with an innovative sensibility that kept him at the vanguard.

Alexander McQueen (British, 1969–2010) was one of the most influential, imaginative, and provocative designers of his generation. His clothing both challenged and expanded the conventional parameters of fashion to express ideas about culture, politics, and identity. Rare among designers, McQueen saw beyond clothing’s physical constraints to its ideological and conceptual possibilities, addressing questions related to race, class, gender, religion, sexuality, and the environment.

The Savage Beauty exhibit examines the designer’s evolution from the start of his fledgling label, to his years as creative director at Givenchy in Paris, and finally to the collections of his own world-renowned London house. It reveals how McQueen adapted and combined the fundamentals of Savile Row tailoring, the specialized techniques of haute couture—such as lacework, embroidery, and featherwork—and technological innovation to achieve his distinctive aesthetic. It also focuses on the highly sophisticated narrative structures found in McQueen’s collections and in his extravagant runway presentations, which suggested the most avant-garde installation and performance art.[2]

Although there was a 2 1/2 hour wait to get into the exhibit, I suppose supporting the museum all these years and writing about them has its perks.  We were given VIP passes that allowed us to pass the 2 block long line and get directly to the exhibit entrance. Of course it was slow going inside the exhibit, as we brushed shoulders with others that had waited so long to enter, but after our 20 minutes or so looking and hearing about McQueen, I believe all visitors felt it was worth the trip and in their cases the long wait.

[divider]Note: If you are having problems watching the video here, try reloading the page and click anywhere on the video window to start playing it.  If you prefer, you can find this and many others we have produced on our YouTube   channel .  View this in HD by mousing over the bottom of the video, once it has begun to play which will then show the options menu then select the HD option.[divider]

Please view my slide show, unfortunately taking photos in this exhibit was not allowed and I didn’t realize this until I was politely asked to put the camera away.  So what you see if only a small portion of this wonderful exhibit and you can see more on their web site where they have wonderful photographs, videos and the story of Mr. McQueen’s life and death. 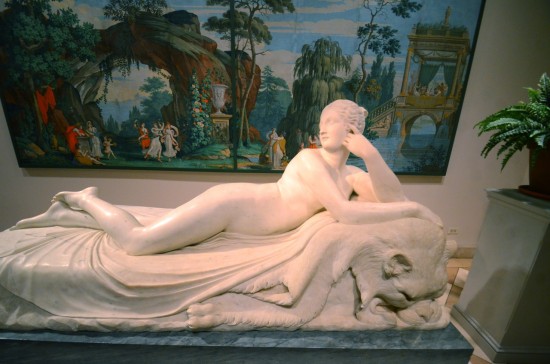 Of course there is simply so much to see at the museum that a visit becomes a week-end affair or at least a number of visits over a period of time would be advised because they continually change their special exhibits.  We will publish these on our site and you can see a number of them and their upcoming six month schedule right here. If you search our site using tags, look for museum and all of our published press releases will be there.

Photographers Note: Photos may be taken at the museum, but no tripods are allowed.  If in doubt ask one of the guards as special exhibits like the McQueen exhibit, due to copyrights, may not allow photography.

Fee includes same-day admission to the Main Building and The Cloisters Museum and Gardens. There is no extra charge for entrance to special exhibitions and at these suggested prices, it beats a day at any amusement park or a movie for the family and you and your family will be enriched by your visit. 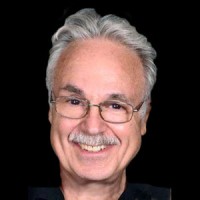