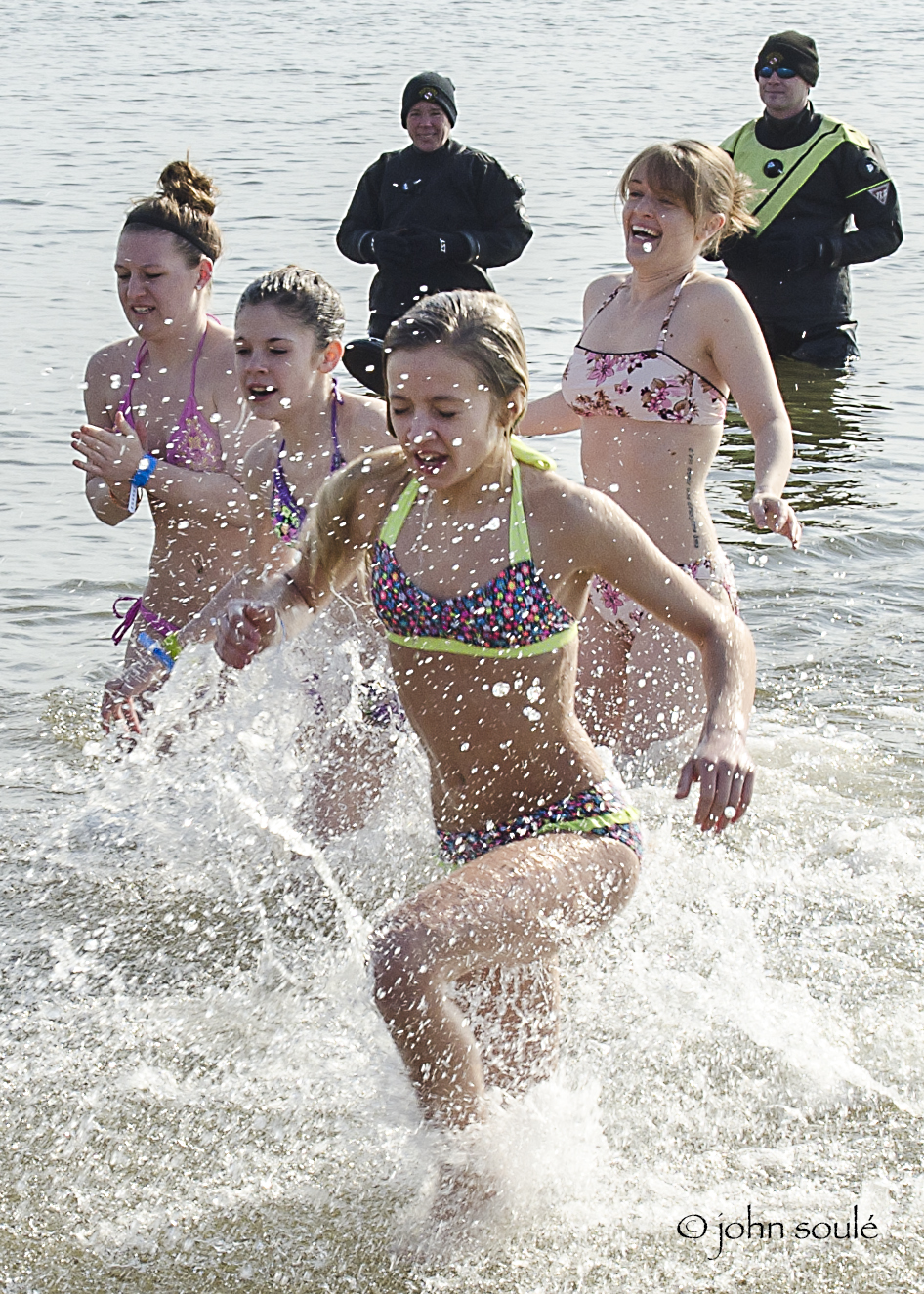 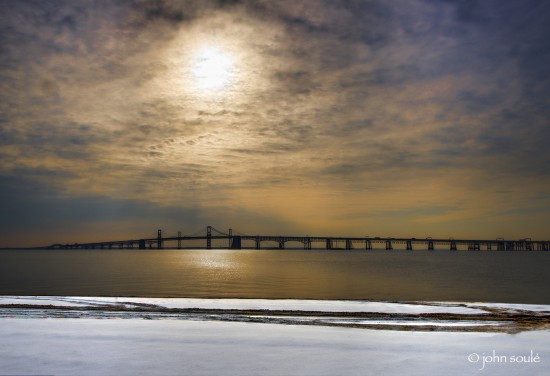 During the winter, many of us who live in the colder parts of the United States often dream of heading to a beach where the sand is warm, a gentle breeze is blowing and refreshing waters are nearby.  But for some, a beach trip in January is just the opposite.  On January 26, 2013, the air temperature at Sandy Point State Park near the Chesapeake Bay in Maryland was around 30 degrees.  The water temperature was hovering at 35 degrees.  There was a fresh layer of snow on the beach from the day before.  Brown sand was exposed by tracks from an ATV patrolling the beach.  It was so peaceful, and yes – so very cold.  And over ten thousand beach goers were getting ready to ‘Be Bold – Get Cold’.   This was the 17th Annual Polar Bear Plunge.

For two days, an estimated 12,000 people, from 34 different states, came to a little beach on the Chesapeake Bay to raise money for Special Olympics Maryland by taking a plunge into the frigid bay waters. The event started off with ‘Frigid Friday’ when local schools, corporations and Police took to the waters.  But the big event was on Saturday when nearly 8,000 beach goers ran down the snow covered beach to take a plunge in the bay. 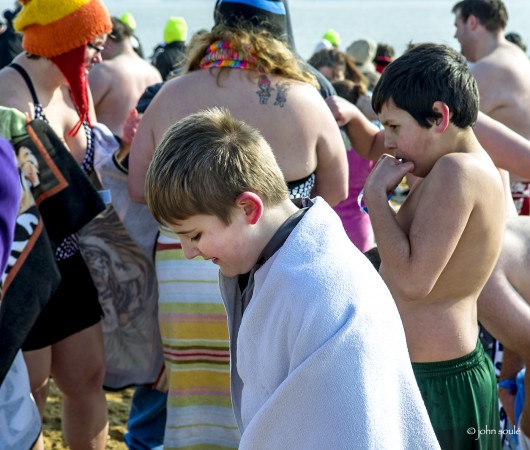 This is the biggest fundraiser of the year for Special Olympics Maryland and the largest event of this kind in the United States.  The POLAR BEAR PLUNGE is hosted by the Maryland State Police and is held at Sandy Point Park (just outside Annapolis at the foot of Chesapeake Bay Bridge) each year.

One of the first questions that comes to mind is – ‘Why?’  From Coney Island New York to Oshkosh Wisconsin to Portland Oregon, the Polar Bear Plunge is essentially a winter event traditionally held around January or February when people jump into a local body of water that typically averages around the low 30?s in terms of water temperature – often to raise money for Special Olympics.  The Coney Island Polar Bear Club, founded in 1903,  claims to be the oldest ‘winter bathing’ organization in the United States.  Plunges are held throughout the world including Canada, the Netherlands and United Kingdom.  So why do this? It could be from the rush of excitement, it could be to raise money for a good cause, or it could be a touch of crazy.  I am not sure what it is, but for whatever reason – folks seem to have a great time.

As I stood on the beach to cover this event, I was wearing the same clothing I would if I was skiing in Colorado.  But even though the chilly winds and freezing January temperatures had most everyone bundled up in layers of gloves and scarves, the Maryland Polar Bear Plungers were ready to enter the water only wearing a swimming suit and shoes. 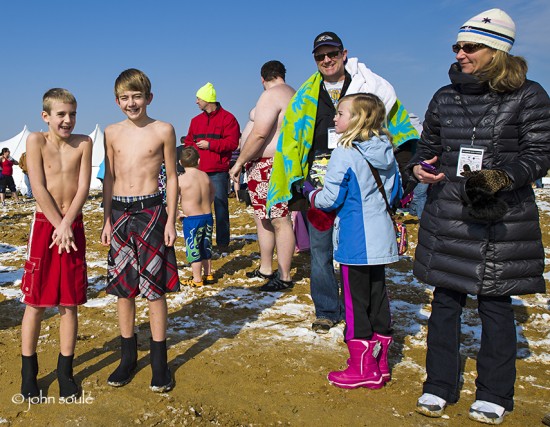 A number of plunges were scheduled – on Friday there were plunges for schools, corporations and the police.  On Saturday there was a Pee Wee and Family Plunge, ‘the 17th Annual Polar Bear Plunge’ and ‘The Super Plunge’.

As each plunge neared its starting time, a line of state troopers and police officers in cold-water wet suits formed a protective perimeter about twenty yards offshore to be able to keep a watchful eye on the participants. 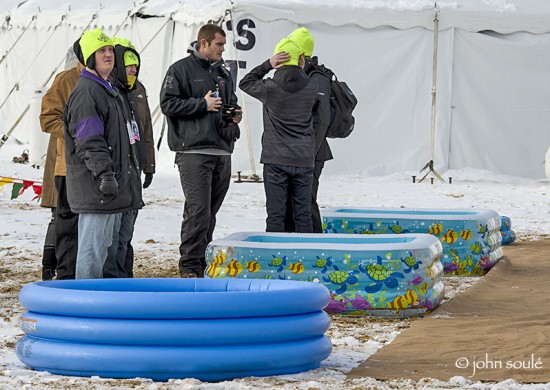 In late morning a group of shallow kiddie pools was in place on the upper beach for children ages 8 and under.  Children waded or splashed about in these kiddie pools as part of their induction into this unique experience. 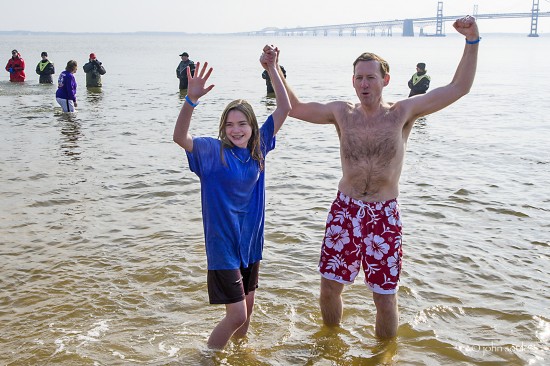 The beach was also opened up to families with children over 8 and senior citizens allow to them to wade into the bay during a less congested time of the day. 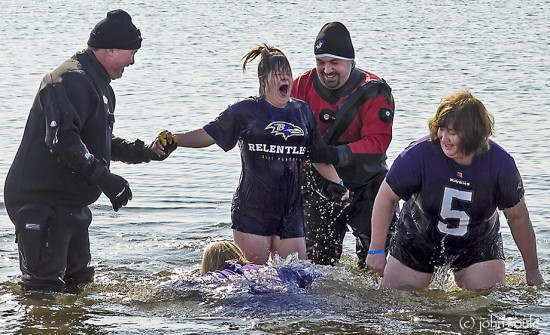 This was also a good time for a number of special needs individuals to participate without all the commotion that would come later in the day as nearly 8,000 ran into the water. 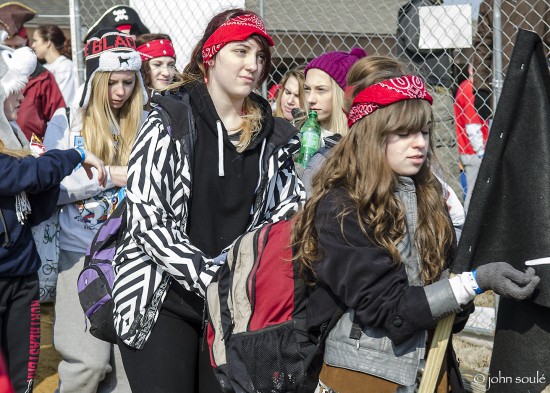 Just after 12pm the lines started forming for `17th Annual Plunge’.  Participants were directed to huge changing tents for Men, Women and Families to ‘get prepared’ for the event.  Participants were required have a signed waiver on file and a wristband identifying their registration before being allowed on the beach. Some of the groups wore themed attire to add to the spirit of the event. 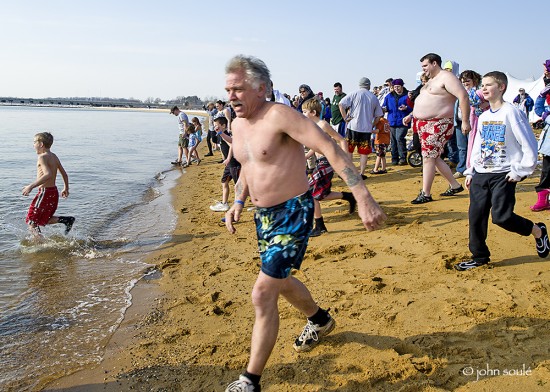 By 1pm, the beach was jam-packed with nearly 12,000 individuals of which 8,000 were prepared to take the plunge.  When the announcement came over the loud speaker, it was a stamped – of sorts.  Some just ran in and ran out of the water – while others took there time.  Some actually went under water a few times – taking a full body ‘plunge’. 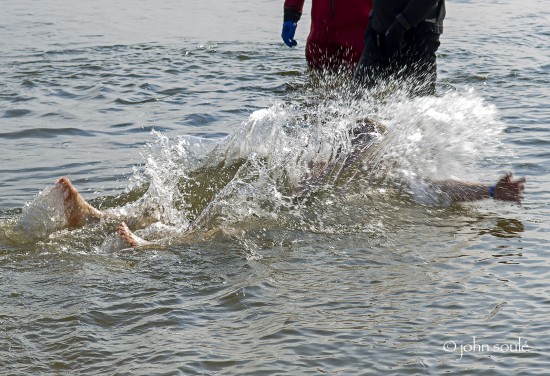 You could hear a few censored words coming from some of the participants as they realized just how really cold it was.  The screams were almost deafening at times.  I heard one fellow say, ‘I lost one of my shoes out there and I don’t care – there is no way I am going back for it!’  But everyone seemed to have a blast and many said they do this every year and look forward to next time.

And there was the ‘Super Plunge’ which was not one or two, but 24 plunges over a 24 hour period to raise money and awareness for Special Olympics.  Super Plungers are a select group of individuals who have plunged in the past and committed to raise a minimum of $10,000. 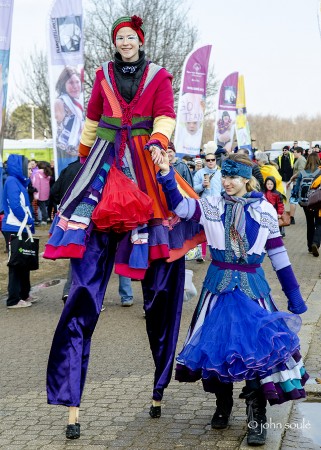 Part of the event was the Winter Festival which ran all day with an array of crafts, musical performances, food and entertainers – including stilt walkers, hoop dancers and caricaturists.  Warming tents were set up as welcome shelter from the cold.  Several bands played and the Maryland Lottery Game held a ‘Price Is Right’ contest.  And for the kids, a special ‘Astra Events’ kid zone was available. 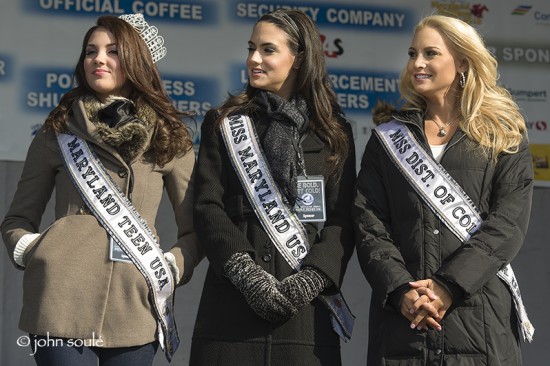 There was also a spirited costume contest judged by Miss Maryland Teen, Miss Maryland USA and Miss District of Columbia.  Some of the costumes were quite original and some were worn into the bay which just added to the fun. 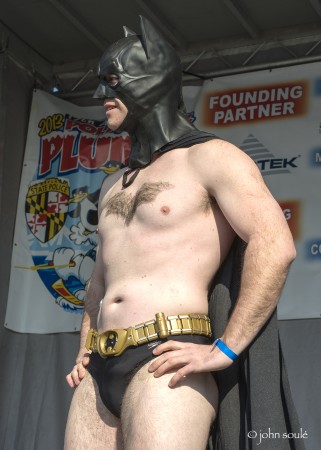 Inspired by last year’s Batman film, “The Dark Knight Rises,” Patrick Fink of Baltimore came clad in a bat mask, long cape and briefs that exposed much of his frozen skin. He even had his chest hair trimmed into the shape of the Batman logo. 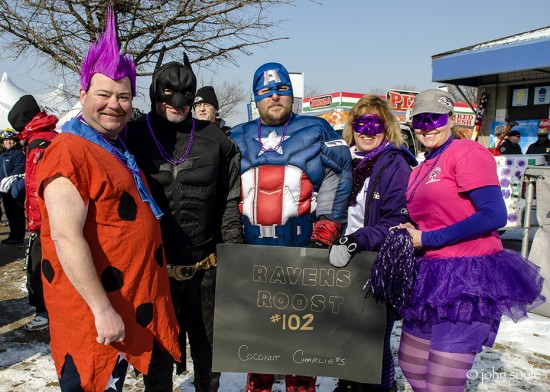 Brian Cavey went dressed as Fred Flintstone with purple hair (of course). It was his first plunge, and he was joined by members from Ravens Roost 102 in Pasadena dressed as superheroes. Brian said that ‘the plunge combines a zany experience and a worthy cause.’ 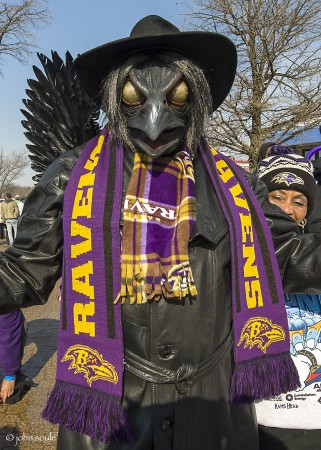 With the Baltimore Ravens heading to the Super Bowl, many on hand were wearing Ravens Jerseys and even costumes of Ravens – feathers and all.  Unlike in prior years, no members of the Baltimore Ravens were on hand as the team prepares for Sunday’s Super Bowl.  Even so, exuberant fans made the event feel like a full Ravens pep rally, with purple clothing, masks of Football Quarterback Joe Flacco and more than a few imitations of Ray Lewis’ signature dance.  This year’s plunge was also attended by the Baltimore Ravens caravan, which included Ravens cheerleaders and band members, who serenaded frigid plungers with team fanfare.

I have covered some crazy events in Baltimore – but this is one you have to experience in person to appreciate.  If you missed it – there is always next year.

I think this image says it all for me … 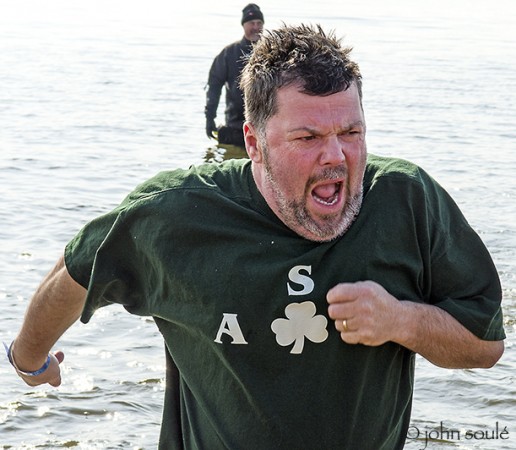