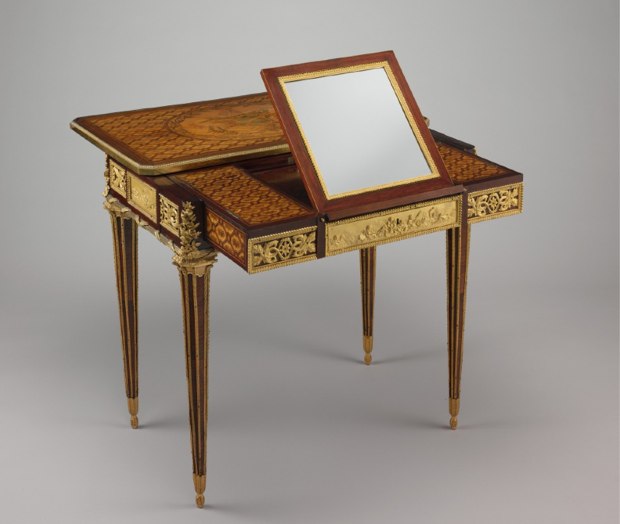 Extravagant Inventions: The Princely Furniture of the Roentgens, on view at The Metropolitan Museum of Art October 30, 2012, through January 27, 2013, will be the first comprehensive survey of the Roentgen family’s cabinetmaking firm from 1742 to its closing in the early 1800s.  Some 60 pieces of furniture, many of which have never before been lent outside Europe, and several clocks will be complemented by paintings, including portraits of the Roentgen family, and prints that depict the masterpieces of furniture in contemporary interiors.

The exhibition and catalogue are made possible by the Anna-Maria and Stephen Kellen Foundation.

The meteoric rise of the workshop of Abraham Roentgen (1711-93) and his son David (1743-1807) is the most spectacular chapter in the history of innovative 18th–century Continental furniture-making.  Their original designs, combined with their use of intriguing mechanical devices, revolutionized traditional French and English furniture types.  From its base in Germany, the workshop served an international clientele.  The Roentgens utilized a sophisticated business model, combined with intensive research on potential patrons’ personal taste and forward-looking marketing and production techniques. 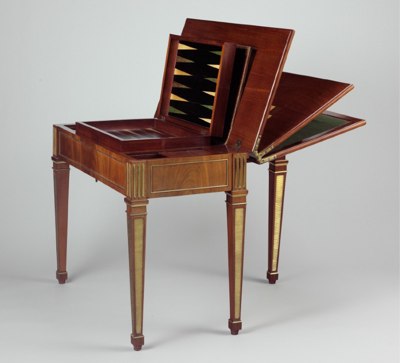 In 1742 Abraham Roentgen opened a cabinetmaker’s workshop in the tiny village of Herrnhaag, in the Wetterau region near Frankfurt am Main.  With only one journeyman on staff, the shop was concerned principally with the production of furniture for daily use. Abraham distinguished himself by adhering to the highest standards of quality, and soon he was producing veneered show-off pieces in the English Queen Anne style, which he had learned during his years as a journeyman in the Netherlands and England.  The local nobility recognized the furnishings’ unusual appearance and quality.  Abraham’s progressive designs and types, such as his fashionable tea chest and multi-functional table, were novelties in Germany and were an immediate success.  Following his move to Neuwied-at-the-Rhine in 1750, Abraham took his innovative designs even further by adapting elegant French-inspired outlines that, combined with superb marquetry, fine carving, intricate gilded bronze mounts, and multiple mechanical devices, came to be recognized by contemporaries as hallmarks of the Roentgen brand.  Roentgen’s playful and perfectly executed inventions became a favored status symbol in princely interiors throughout Europe.

Abraham’s son, David Roentgen, graduated quickly from his apprenticeship in his father’s workshop and eventually took over the enterprise between 1765 and 1768.  He perfected the sophisticated structure and intricate marquetry designs of the furniture, and was appointed Ebéniste-Méchanicien du Roi et de la Reine at the court of Queen Marie Antoinette and King Louis XVI at Versailles in 1779.  Having conquered the Western market, David revised his designs and reinvented his product line’s appearance as he looked eastward.  Focusing on his new target, the Imperial residences of Catherine the Great in St. Petersburg, David Roentgen developed specific models catering to Russian taste.   He caught the fancy of the Empress herself with his Apollo Desk (1783-84), which depicted her favorite dog as a gilded mount, and which David produced on pure speculation.  After Catherine the Great paid a huge sum for the piece, Russian nobility
hurried to catch up with its sovereign, ordering examples of “Neuwied Furniture” by the dozens. 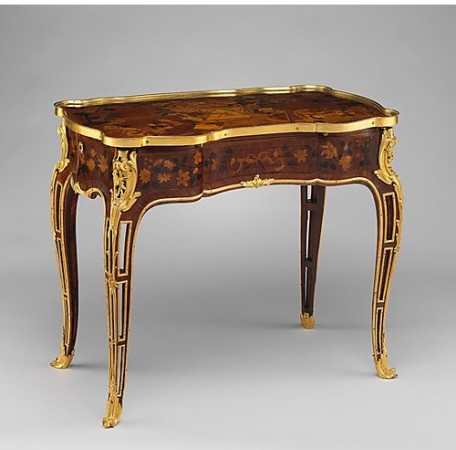 Abraham and David Roentgen’s story is a tale of international success, fame, luxury, and high honor but, in the case of David, it is also the tragedy of a deeply pious man who struggled to balance his ambitions and his glorious achievements with the regulations of his religious community, the Moravian brotherhood.  At the pinnacle of David’s career, the workshop employed more than 130 specialists and the annual production amounted to that of the famous Meissen porcelain factory.  His fortune shifted dramatically with the progress of the French Revolution, as Europe’s nobility struggled to stay afloat, and the market for luxurious furnishings collapsed.

Many of the works in Extravagant Inventions will be lent from distinguished international museums and royal collections.  Six pieces from the Metropolitan Museum’s own collection of Roentgen furniture will be featured, in addition to two that are on long-term loan to the Museum.  The exhibition will showcase many outstanding pieces, including a Writing Desk (ca. 1758-62) designed by Abraham Roentgen and considered to be one of the finest creations of his workshop; a spectacular Automaton of Queen Marie Antoinette (1784), a likeness of the queen at a clavichord that still functions and will be played at select times during the exhibition; and six intriguing objects from the Berlin Kunstgewerbe Museum that have never before traveled, most notably a mechanical Secretary Cabinet (1779) made for King Friedrich Wilhelm II of Prussia that is one of the most complex pieces of royal furniture ever produced.

The most complicated mechanical devices in the exhibition will be illustrated through virtual video animations.  Additionally, working drawings and portraits of the cabinetmakers, their family, and important patrons—as well as a series of documents owned by the Metropolitan Museum that originated from the Roentgen estate—will underline the long-overlooked significance and legacy of the Roentgens as Europe’s principal cabinetmakers of the ancien régime.

Extravagant Inventions is organized by Wolfram Koeppe, the Marina Kellen French Curator in the Metropolitan Museum’s Department of European Sculpture and Decorative Arts.

The exhibition will be accompanied by a fully illustrated catalogue edited by Wolfram Koeppe, with contributions written by leading experts in the field.  It will provide the first scholarly treatment of the subject in English in more than 30 years.   The catalogue will be published by The Metropolitan Museum of Art and Yale University Press, and will be available in the Museum’s book shops.

An audio tour, part of the Museum’s Audio Guide program, is available for rental ($7, $6 for Members, $5 for children under 12).

In conjunction with the exhibition, a variety of education programs will be offered. Highlights include a Sunday at the Met program on November 18, gallery talks, and “How Did They Do That?” demonstrations of the furniture in the exhibition for families and visitors of all ages. The exhibition and its related programs will be featured on the Museum’s website at www.metmuseum.org.