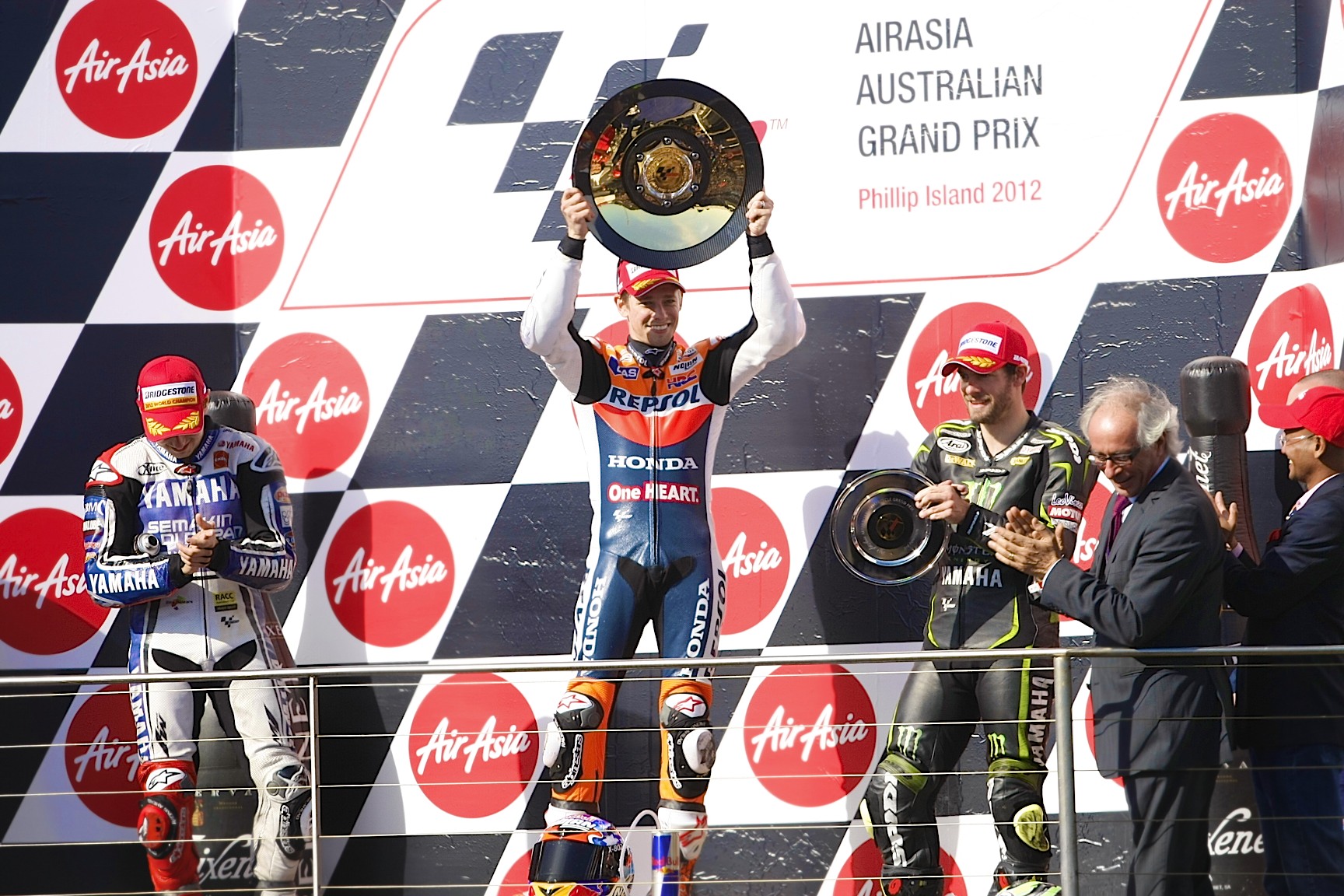 [dropcap]H[/dropcap]ome town hero Casey Stoner farewells Australia with a ‘Double Hat Trick,” with a fantastic sixth straight win at the  2012  Australian AirAsia MotoGP at Phillip Island from Spanish rider Jorge Lorenzo from the Yamaha factory Racing Team, who will be later crowned the new 2012 MotoGP Champion.

Casey’s Repsol Honda Team mate Dani Pedrosa crashed on the second lap while leading the race at Phillip Island. Making him sit back to watch the race from the pits. Giving Lorenzo second place and also the 2012 AirAsia MotoGP Championship.

Phillip Island put on amazing weather with just over 53,000 fans coming to farewell their King Casey Stoner and to watch him win the 2012 Australian AirAsia MotoGP

Over 122,000 people attended the three days at the Island. Compared to just over 95,000 people that attended the 2011 MotoGP, up 28% from last year setting a new Australian MotoGP crowd attendance.

Stoner set blistering times during the previous two days of practice with a lap time on his first day of 1.29.99 in conditions that were less than ideal, he went on to win by an amazing 9.223 seconds. Leaving  the Spanish rider Jorge Lorenzo in his wake. English Carl Crutchlow riding for the Monster Yamaha Tech 3 Team finished in third position. Casey Stoner’s win at the 2012 Australian AirAsia MotoGP will put him up there with the best such as Agostini, Rossi and his idol Mick Doohan. Who are all ahead of him on premier class wins.

The MotoGP is the Olympics of motorcycle racing world championships being the pinnacle of every list of riders dreams. The best riders in the world compete in eighteen races in thirteen countries covering the continents Australia, Asia, Europe and North America. Riders from nine countries ride the most advanced motorcycles produced by Yamaha, Honda, Ducati and other independent makers. Also on the MotoGP weekend there are two other divisions that ride under the MotoGP banner. There is the Moto2 and Moto3. Who have their own World Racing Championships. Along with the premier class, two other world champions will be crowned at the end of the MotoGP season.

The 2011 MotoGP season attracted over 2.3 million people. No doubt with the crowds attending this years circuits, last years record will be easily broken as the MotoGP Show rolls through the continent

The Australian circuit at Phillip Island was part of the global phenomenon, where I had the pleasure of witnessing the farewell of Australian rider Casey Stoner, who was supported by the 122,000 strong home crowd that attended the three day event.

[box_light]Stoner’s Corner[/box_light]Casey Stoner was honoured earlier in the week with part of the Phillip Island track to be named after him.  The high speed turn three to be known as “Stoner Corner”. Casey Stoner has dominated the Phillip Island MotoGP circuit from 2007  to 2011. This was Stoner’s final appearance at the Australian circuit before he retires at the end of the 2012 season.

The 4.45 Km Phillip island circuit was restored in 1988 at a cost of three million dollars ready for the  first round of the 1989 500cc World Motorcycle Grand Prix. From 1991 to 1996 the Grand Prix event was staged at Sydney’s Eastern Creek before returning to Phillip Island after a six year absence in 1997. The new upgrades at the Phillip Island circuit include a medical centre, TV building , 504 square metre corporate and conference area and also a 19 bay garage compound. Which helps boost the pit lane garages to 59.

The township of Cowes located about 8 mins from the Grand Prix circuit have a Grand Prix Festival to welcome the tourists. At the festival there was live music playing on stage.  You could also eat at one of the many cafes, bars and restaurants that are located in the main streets of Cowes. There was also a display of vintage and classic bikes  down on the jetty triangle to see. This was Cowes MotoGP carnival.

This years 2012 Australian AirAsia MotoGP was amazing, a carnival atmosphere that attracted people from all four corners of the globe. Italians, Spaniards, German, Dutch, Japanese, U.S, English and many many more. People, young and old were enjoying themselves creating a vibrant family atmosphere.

The crowd was having a party. Dressed in their riders colours,  supporting their idols such as Valentino Rossi, Jorge Lorenzo, Danni Pedrosa and Nicky Hayden. But the majority of the crowd were there  to farewell their King “Casey Stoner”.

The sunny weather highlighted how beautiful the Phillip Island circuit is overlooking the sea. The gods were smiling above us. The seagulls were squawking, what more could we want? All that was needed was the tranquility to be drowned out by the most advanced technical motorcycles on this planet! The MotoGP race.

There were plenty of things to do and look at  during the 2012 Australian AirAsia MotoGP. You could walk around and see  all the old bikes on display or maybe take a walk and look at the pit lanes, where the super bikes were. If you wanted to have a better look at the circuit and you were not afraid of heights. You could take a wonderful scenic tour with a helicopter ride or watch the fantastic Roulettes from the ground put on a fantastic air show. Maybe celebrity spotting, such as model Kate Peck or Sidonie Sheene – the late Barry Sheene’s daughter or pose and have your photo taken with the MotoGP Grid Girls. Which seemed to be very popular.

At the Australian AirAsia MotoGP there were shops with plenty of motorcycle gear to buy. Also parts for your motorcycle or maybe a brand new motorbike and  for the kids there were rides and plenty of goodies to look at.

The staff at the 2012 AirAsia MotoGP did a fantastic job. The security, caterers, Track staff, Marshalls and the ladies at the Media Centre made sure everything ran smoothly.

My 3 days at the MotoGP was fantastic and amazing, priceless memories. Sad to see it go. I think we should have a public holiday on the Monday after the Sunday Grand Prix. After all, we have one for a horse race, The Melbourne Cup. Maybe The Australian AirAsia MotoGP Cup. It has a nice ring to it! I also can predict the future too. A brand new motorcycle in my garage! Well done Melbourne for a wonderful event.

At Grand Prix Australia – To find out more about latest news on Grand Prix in Australia check out www.motogp.com.au

At Dorna Sports Spain – To find out more about the latest news on the MotoGP check out www.motogp.com