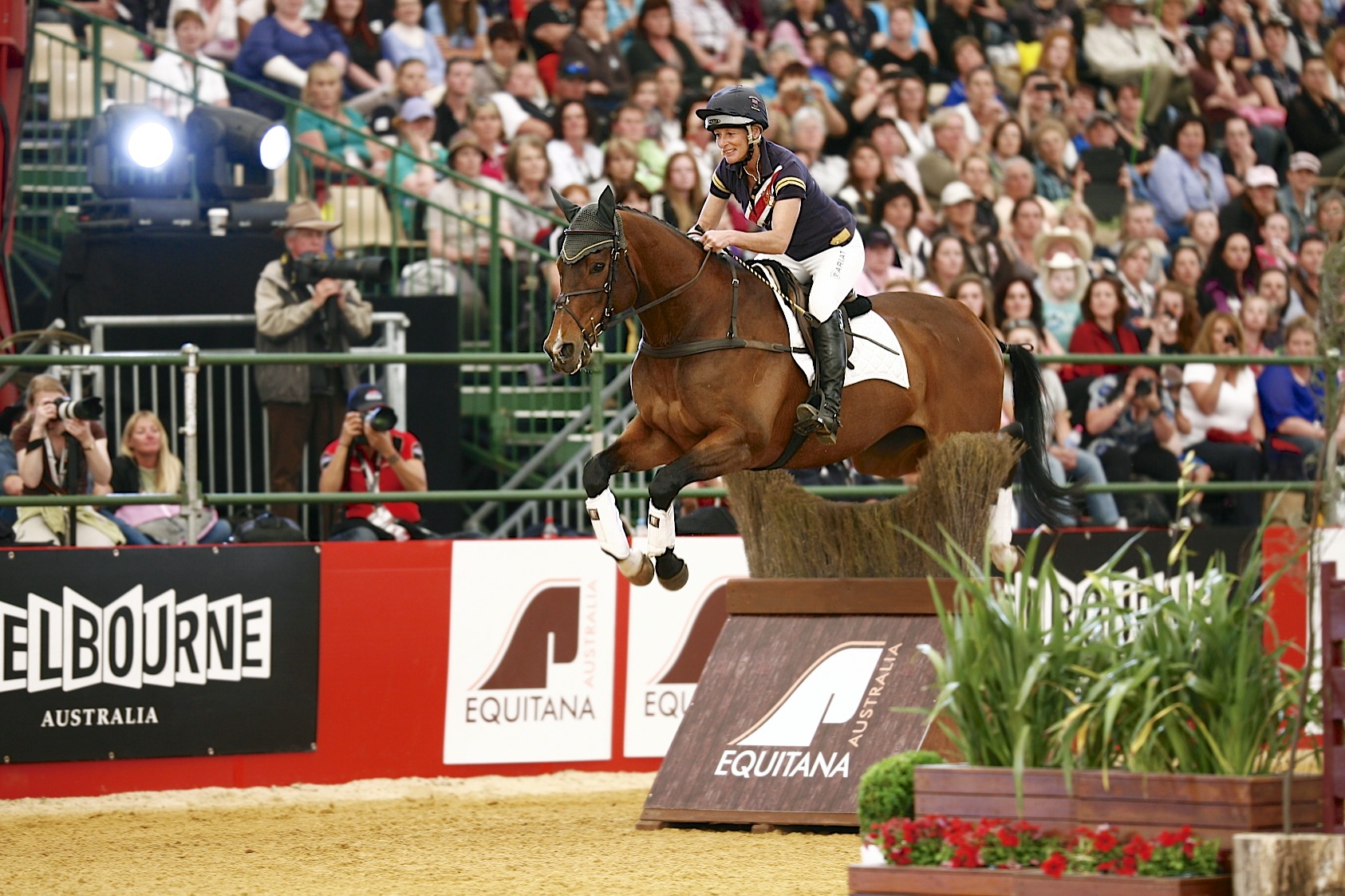 This years  Australian Equitana was held at the Melbourne Show Grounds attracting under 60,0000 people from around Australia and from all over the world. More than 300 exhibitors attended the four day event making it the biggest equine event in the Southern Hemisphere.

Australian Equitana attracted some of the world’s best equine presenters.  Experts sharing advice and thrilling the Australian public with their horse skills and demonstrations . 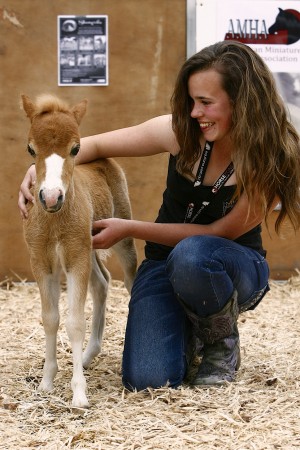 Melbourne witnessed the Equestrian Grand Finals series for the first time. This series brought together the best riders from around Australia to compete at the equine sport of dressage, eventing and jumping.

One of the most popular clinics was “Eventing,” with Mary King. Mary a five time representative of Great Britain at the Olympic games in equestrian. Having won the British open champion a number of times. Mary was named World Number One rider in 2011. The British equestrian champion showcased several riders that were present and showed techniques in jumping and eventing. Mary then later performed the techniques herself and showed the crowd why she was voted number one rider last year. 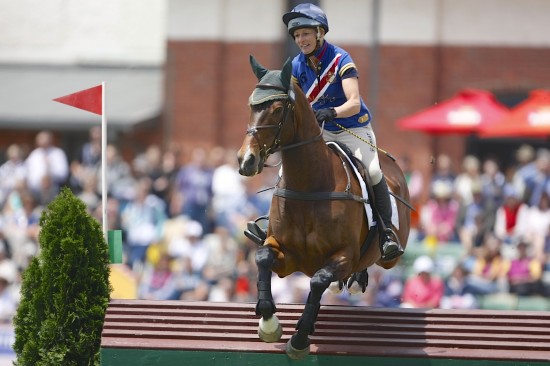 The Way of the Horse Australian Challenge was shown at the Grand Pavilion indoor arena. This displayed the skills of Ken Faulkner, Naish Hogan and Paul Clarkson entering the round pen. Where they  made contact with  unbroken stock horses for the first time and attempted to gain the horses trust. This was amazing to watch. The trainers demonstrating their skills and love for the untamed horses and showing the crowd how to tame a unbroken horse. 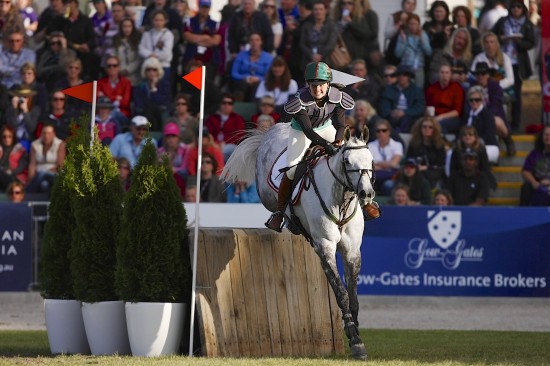 A popular attraction at this years Australian Equitana was the Webjet Australian Extreme Trick Riding Championships. This event presented by the Hawkesbury River Saddle Company and showcased the death defying skills from riders, who performed tricks such as the “hippodrome, suicide drag” and the “coffin”. These riders displayed skills and courage that would make any Extreme sport athlete proud.

The Mounted Games Tri-State Challenge. Pits state against state. Where the best riders from across Australia compete at a series of events. Testing their skills and accuracy and speed over a course to see who would be the best state team in Australia. 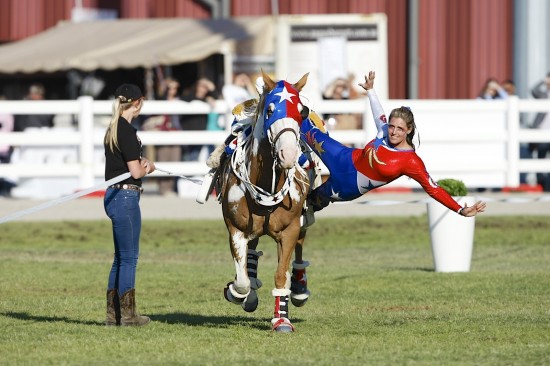 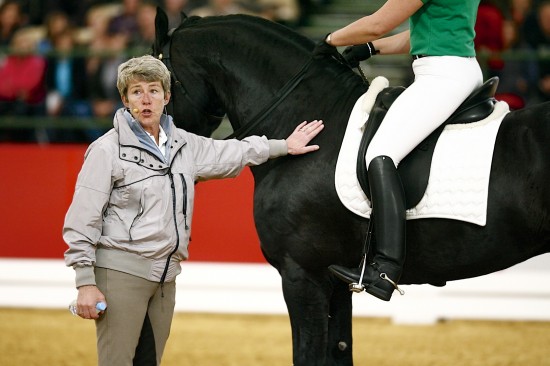 Kyra Kyrkund a well known and respected trainer and dressage rider conducted a three hour dressage clinic. This clinic attracted many people. Who were willing to learn trade secrets from one of the most respected riders in the world. Showing how to train a horse from the early stages to grand prix stage. Kyra demonstrated amazing knowledge, agility and control with her horse. 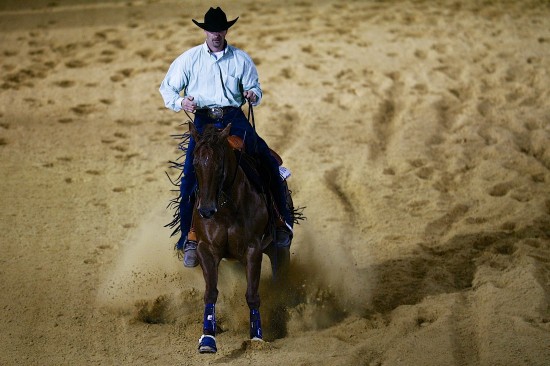 Stock Horse State of Origin Challenge time Trials showcased top riders over a designed bush obstacle course against the clock. Two riders from each Australian state competed over two rounds, where both riders scores were added together to obtain the winning score. 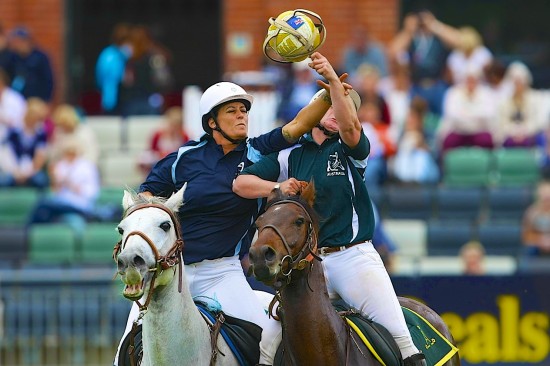 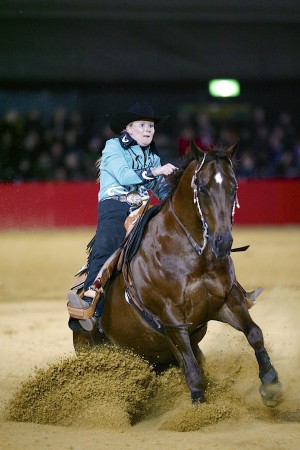 Horse Ball was at the Australian Equitana and looks like rugby on horse back. Played with something that is similar to a volley ball. The players look like they play polo. But try to score goals like in basketball through a net. The sport is hugely popular in Europe and is new to Australian shores. The sport was exciting to watch and will attract a big following in the future.

The Victorian branch of the Commonwealth Clydesdales Horse Society of Australia presented an insight into the history of the big horse usage in Australia. The Clydesdales were shown how they were used in early Australia on farms, from dressage and jumping. These big animals were accompanied by a Scottish pipe band. Who led them in a procession around the TuffRock Outdoor Arena to the cheers of the welcoming crowd.

One of the biggest surprises for the Australian public was the preview by the National Theatre of Britain and Global Creatures production of the hit play and later block buster movie “WAR HORSE”. 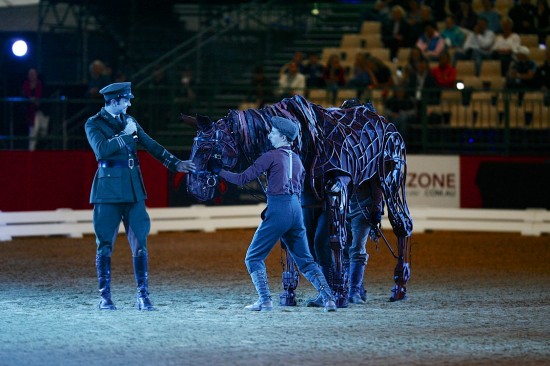 Which will Premiere for the first time in Australia at the Arts Centre in Melbourne. War Horse will be performed by an amazing cast and puppetry. The preview was awe inspiring. Showcasing the talented cast and amazing puppetry effects that go into this production, giving the public a taste in what is in store for them in this extravaganza. War Horse tells the story of a young man’s journey during World war One to find his beloved horse, who is sold to the cavalry. 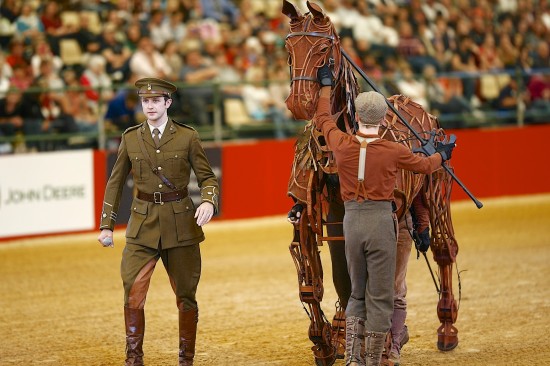 Open Reining Championships proved to one of the many highlights at this year’s Equitana.  The sport shows the skills of the rider and horse in the classical horsemanship and ranching to the sound of music. Showing the power and athleticism of the horse and rider.

The Melbourne Show Grounds provided the biggest shopping complex for equine lovers in the Southern Hemisphere with over 300 exhibitors at five areas. You could buy the latest saddles, hats, boots, clothing wear,  jewelry medicine, feed or insurance. There was also the latest John Deere machinery available. It was a horse lovers dream, for the kids there were miniature horses, rides and a Equitana Youth Forum. This provided young riders with a chance to meet some of Australia’s best riders. Who gave them advice and tips on buying horses and advice on how to become a top rider. 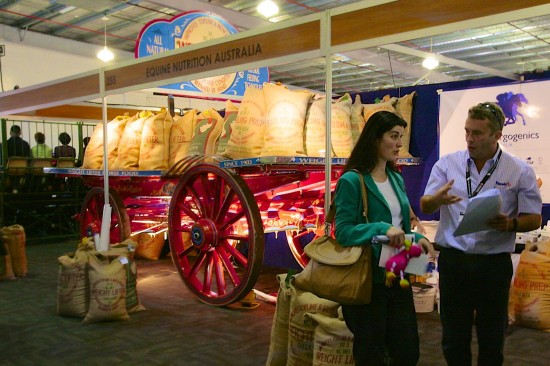 Once you had bought plenty of goods at one of the many exhibitors, you could walk over to see master class clinics provided by two of the USA’s great horse trainers. Richard Winters and Josh Lyons. Both of these horse masters provide two clinics. The Behavioral Clinic and The Western Performance Clinic. Entertained the audience and gave an insight into horse behavior such as biting, bolting, bucking spooking, cutting and trial sports and solutions to fix them. 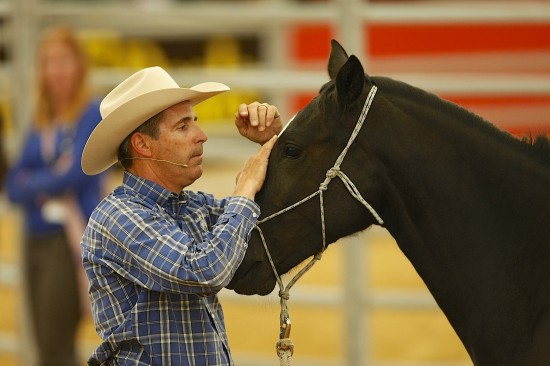 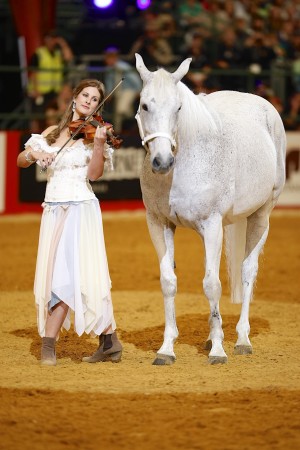 Open Barrel Racing was a crowd delight. The fast and entertaining event show cased the power, agility, strength and speed of the horse. Where the horse was accompanied by beautiful cowgirls. They then had to race around three barrels against the clock. The popularity of Barrel Racing has seen it grow into a international sport.

The Australian Cutting Championships came to the Australian Equitana at Melbourne. Which showed the skills of the rider and the athleticism of the horse amongst cattle to keep a single cow separated from the herd. This was shown at the Grand Pavilion Indoor Arena.

The highlight of the four day Australian Equitana was the final day family two hour showcase. Presented at the indoor arena to the packed family crowd. There was standing room only.

This extravaganza brought together all the performers together to present  Equitana’s own version of “Equine Cirque du Soleil”. An amazing, breath – taking performance of acts that opened with the preview of the hit play “WAR HORSE”. 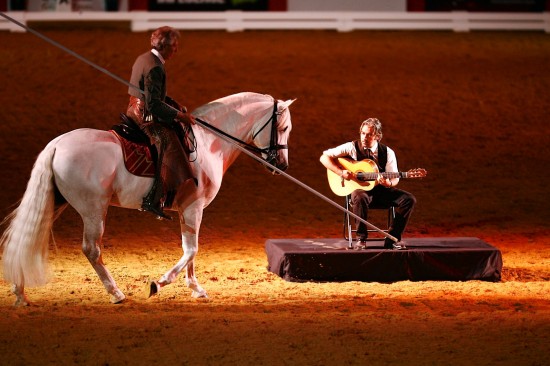 Some of the biggest names in the equine world such as Mary King, Richard Winters, Josh Lyons, Ali Al Ameri, Manolo Mendez to name just some, combined with some of Australia’s best riders to put on a entertaining display of horsemanship. 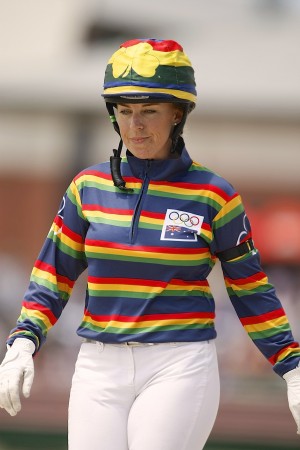 The beautiful performance of the liberty horse sequence left the crowd speechless and in awe. World class violinist Sarah Moir played, while her beautiful white horse gracefully moved elegantly around her. Sarah was later joined by dancer Mikayla Barber and a black stallion. They both along with the white horse performed to Sarah’s version of Bolero. this had to be seen to be believed. Simply beautiful!

Luke Thomas provide some comedy with his trick horse. Showing you can teach a horse a new trick, by making his horse roll on his back like a dog with his legs up in the air.  Luke himself sat on the ground. Then commanded his horse to leap over him. There  was Roman riding, trick riding and plenty of performances that made the Equitana Showcase magic and breath-taking.

The 2012 Australian Equitana was a huge success. Melbourne had put on a wonderful well organized family event that showed, why this is one of the best equine events in the world. 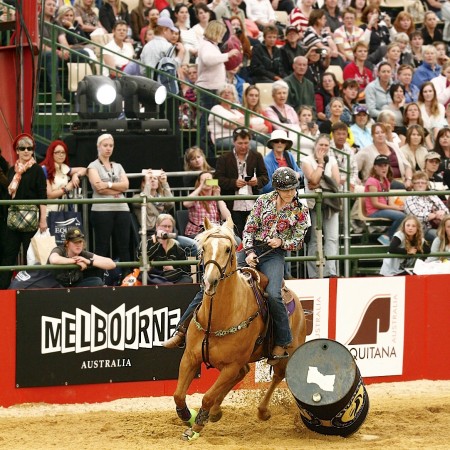 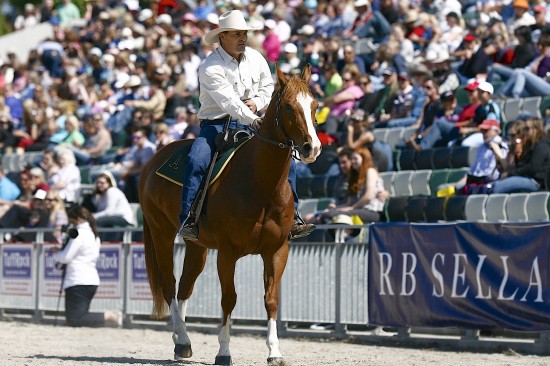 At Equitana Australia – To find out for the latest news on the Australian Equitana check out www.equitana.com.au