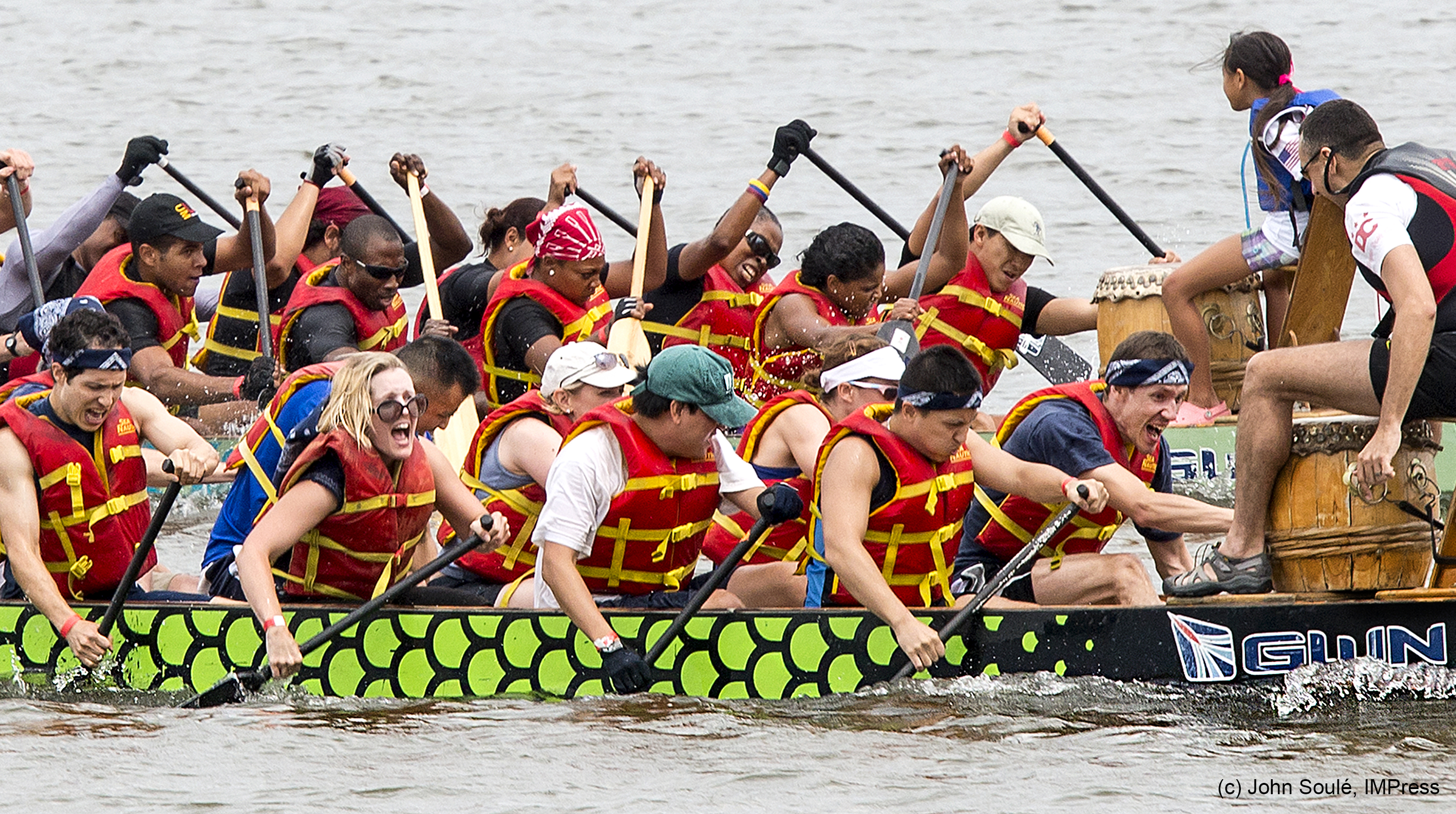 It was early morning.  The sky was cloudy and rain was quickly approaching.  Groups of decorated boats were gliding on the water as paddles were being synchronized to the sounds of beating drums. Spectators waited on the river bank full of anticipation and excitement.  It was a scene that dated back two thousand years from ancient China.

It was time for the ‘Dragon Boats‘ and a day of head-to-head racing competition.  The setting was the National Harbor on the Potomac River, just outside of Washington DC, and this was the 2012 Inaugural Dragon Boat Regatta.  Mr. Jeff Kuhn, organizer for the Regatta, stated that teams had traveled from Pennsylvania to Florida to participate in this ancient sport.

Dragon boat races have taken place annually for more than two thousand years as part of religious ceremonies and folk customs.  Over time it has grown in popularity and is now an international sporting event.  This was all new for me. 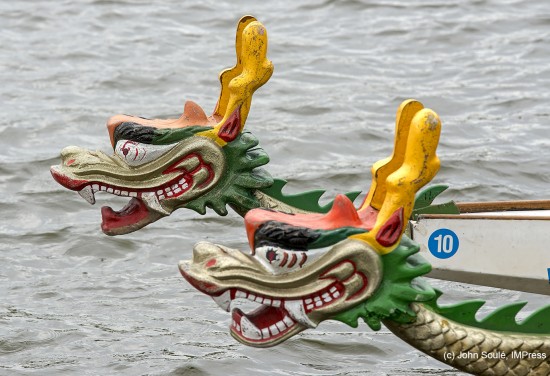 This competitive water sport is based on an ancient Chinese legend in which Qu Yuan, a great Chinese poet and adviser to the emperor of the Chu Kingdom, became upset over growing government corruption.  He became so despondent, he threw himself into the Mi Lo River while holding a large rock.

Yuan’s devoted followers, once learning what had transpired, began beating drums and splashing the river water furiously with their paddles as they raced to the river in a failed attempt to save him. To prevent his body from being taken by the fish, water dragons and evil spirits, they threw rice dumplings, wrapped in silk, into the water. This is reenacted in the modern Dragon Boat festival.

For the festival, Buddhist monks and local dignitaries go to each boat and “awaken” the dragon and “open” his eyes by dotting the pupils with red ink. This way, the dragon can see his way to victory.  In many countries, however, this ceremony is not part of the sport racing aspect and more about the team competition.

[box_light]The Boats[/box_light]A Dragon Boat is a physically long boat, similar to a stretched canoe or gondola.

On the front is a stylized Chinese dragon head and on the back, a dragon tail.   All are painted in vibrant colors.  Boats are designed with seats for paddlers to sit in pairs in five to ten or more rows.  There is a place for a drum on the front with a raised seat for the drummer.  There are literally hundreds of different styles of Dragon Boats, especially in Asia where many villages craft their own. 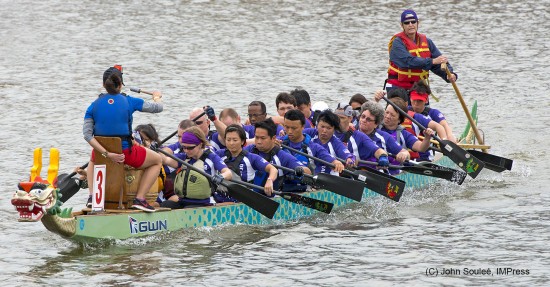 Boats that are fully dressed with a dragon head, tail and drummer can be quite magnificent and majestic.

[box_light]The Teams[/box_light]A standard racing crew typically consists of twenty paddlers, (in pairs facing the front of the boat), a drummer at the front (facing the paddlers) and a steersman (sweep) at the rear of the boat.  Dragon Boats can vary in length and width that the crew size will change accordingly – from small Dragon Boats with just ten paddlers up to boats that can have more than eighty paddlers. 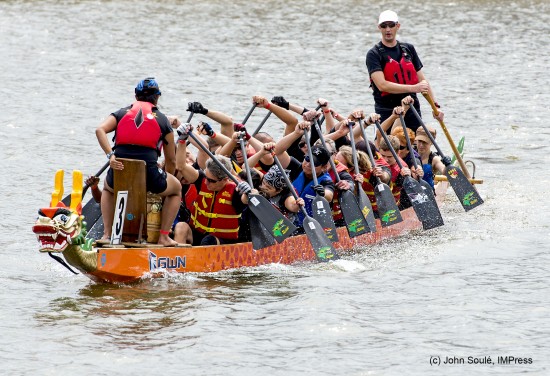 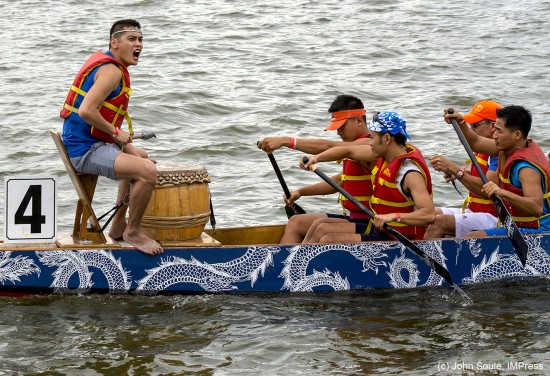 The paddler is responsible for propelling the boat.  The paddle resembles the one used in a canoe and is not attached to the boat in any way.  Each paddler must work in synch with the other paddlers guided by the beat of the drum.  If just one of the paddlers gets out of stride, then the entire group is affected.  The faster and more synchronized the paddling, the faster the boat.

The drummer is responsible for calling the stroke, often considered the ‘heartbeat’ that the paddlers depend on for synchronization.  The drummer may also communicate commands through a combination of hand signals and/or voice calls.  In many of these events, the drummer can be seen wearing colorful headgear. 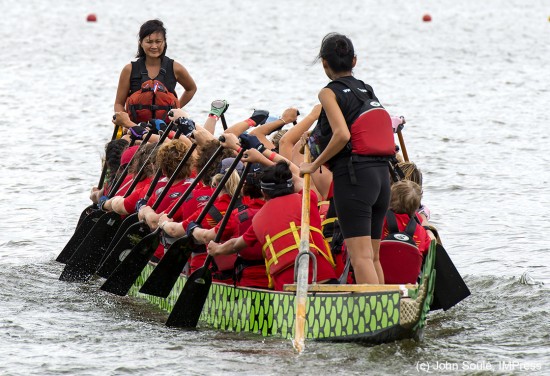 Modern day competition began in Hong Kong in 1976, but the history of competition dates back to the same era as the original games of Olympia in ancient Greece. Both Dragon Boat racing and the ancient Olympiad included aspects of religious observances and community celebrations along with competition. 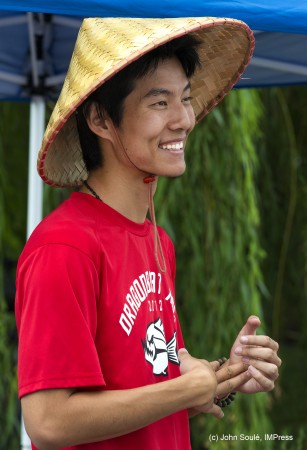 In the United States, Dragon Boat Races are held from coast to coast in most every state, (including Washington DC).  Over eighty U.S. cities now hold Dragon Boat Races annually.  And, there are nearly three thousand unique teams that have over one hundred thousand members.

An individual’s technique, endurance, stamina and synchronization are as important, if not more important, than their physical size.  Training, practice and the  drive to win are the key elements for success in this tough team competition.  Most teams practice several times a week and partake in endurance training to improve stamina and interval training to work on speed throughout the year.

For the 2012 Dragon Boat Regatta, twenty-two teams came to compete with teams of just men, just women or a mixture of both.

Some teams represented local companies, such as Booz Allen Hamilton and Accenture.

GoPink!DC was a Washington DC team for breast cancer survivors and their supporters.

Some of the entries from Maryland included Baltimore Annapolis Dragons and the University of Maryland University College’s (UMUC) Virtual Dragons.

One team, Washington DC’s Out of Sight Dragons, consisted of blind and visually impaired members.

Puff, out of Miami Florida, traveled over eleven hundred miles for the competition.

It was due to the efforts of Mr. Jeff Kuhn, president of the popular DC Dragon Boat Club, that the inaugural event for the Dragon Boat Regatta was held at the National Harbor’s new 300-acre multi-purpose development. Mr. Kuhn, a converted rower, has been involved in racing Dragon Boats for the past three years and worked hard to bring these races to this exciting new venue.

Mr. Kuhn stated that next year’s event, to be held at the end of August, will have more than double the competting teams and to “…expect a much larger turnout”.

Mr.Kuhn is also in negotiations to bring the World Police and Fire Games to the National Harbor in 2015.

According to Ms. Rocell Viniard, National Harbor Vice President, some exciting additions are planned in the near future for the Nationl Harbor that will make this popular venue even more spectacular.

In all, there were twenty-two teams racing in twenty-four events.  The races were packed with excitement with some teams pulling to victory in the last few seconds through amazing precession teamwork and strength.

The 2012 Dragon Boat Regatta Champions were:

[box_light]Footnotes[/box_light]
I was surprised to see such a wide range of ages of those that were competing in this sport. Everyone seemed to be have a fun time but took the competitions very serisously.  In the end, I can say that I learned a lot by covering this event and have aquired a new appreciation for the sport.
—————————————————————————–
Where have I been for the past two thousand years?
—————————————————————————–
For more information about Dragon Boat Racing and the clubs near you, do a quick search on the internet – you may be surprised as to what you have been missing.  I know I was. 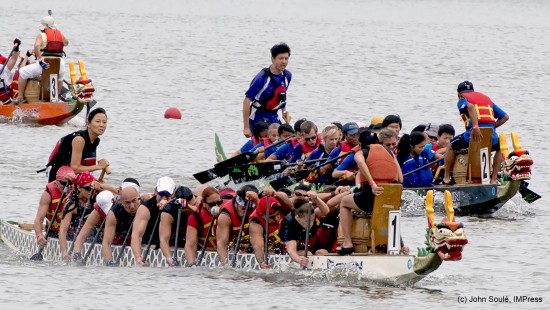 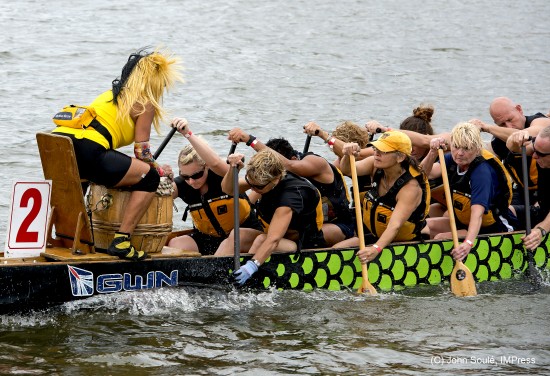 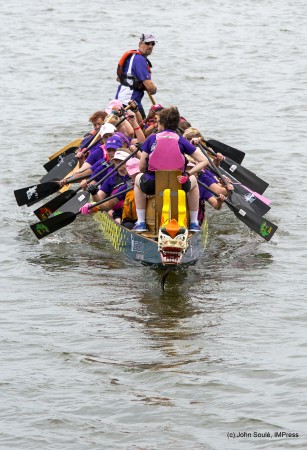