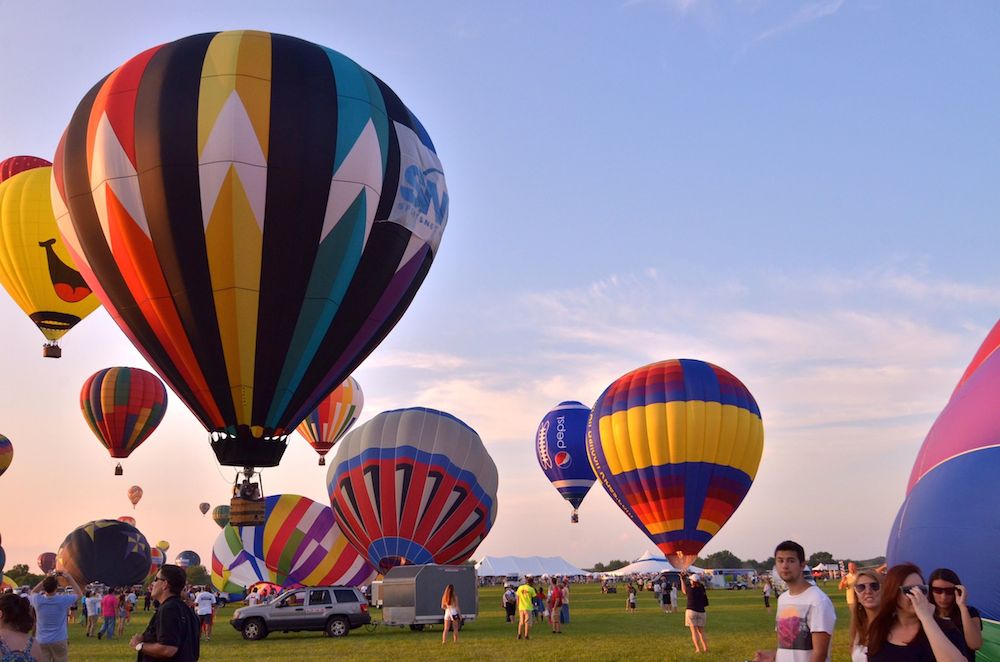 [dropcap]I[/dropcap]PA and IMPress Magazine staff members have been covering many international Hot Air Balloon Festivals.  You can view some of our Hot Air Balloon articles and images by clicking here.  Of course the Balloon Festivals in Switzerland are truly spectacular as you watch the accession of the balloons against the pure white snow-covered mountains, but for those of us that live in the United States and have had the opportunity to go to one of the many ballooning festivals or have taken a ride in one of the hot air balloons, it has to be right there on the top of anyone’s To Do List.

I have been fortunate to attend the past three years at the QuickChek New Jersey Festival of Ballooning.  You can see our 2012 article and video on this site.  Unfortunately, last year none of the balloons actually flew due to high winds and rain.  So this year I was looking forward to once again attending this fabulous event.

Watch our video of the day we spent at the Festival and then read continue to read the article.

The beautiful music you will hear “A Healing Touch”  is the creative work of an IPA and IMPress staff member, Jim Ankan Deka. Jim is also a music composer and singer-songwriter from Assam, India.  Visit his website to hear more of his works and see his articles and photos on IMPress.

The Festival’s Executive Producer is Howard Freeman. He tells us that many people have always wanted to go up in a hot air balloon so they can cross it off their bucket list.  At my age, I had better start my own bucket list now, time is running out.

He said that many people will buy rides as the perfect gift for birthdays, anniversaries, and graduation celebrations. It is even a  unique way to propose marriage.

The festival is sponsored by QuickCheck in association with PNC Bank and is the largest summertime hot air balloon and music festival in North America. The festival ran for three-days from July 25-27, 2014 at Solberg Airport in Readington, NJ.

We decided to attend Saturday and arrived around 2:00 PM so we had enough time to walk the festival grounds, visiting the many companies and vendors who were there to offer festival guest free samples of their food and drink products.

There were bags of chips of all types, snacks, candy, yogurt in a tube, drinks of all kinds and so much more.  Of course QuickChek had their full store, in a tent and open for business.

Impossible to go hungry at this event, with all the samples, and so many food concessions and trucks one might simply go to this festival for the food alone.

But the free food items were just the tip of this iceberg.  Their were exhibitors that gave us full tubes of sun tan lotion, something we forgot to apply earlier that day.  We also received many other full retail packages of cold remedy, Bandaids and other items that we will certainly use this coming year.  For the cost of a ticket to the Festival, one can leave with a huge bag full of free products worth far more than the admission price.

Many exhibitors had spinning wheels and gave you an opportunity to get some of their very cool swag.

Now unlike other Festivals we have attended that have rides for the children, this festival had the rides too and a lot more.  There was a live horse ride for the younger children, and a collection of large  inflatable attractions including a giant slide.  Than of course there were the shows… Magic Show anyone?  Yup they had one.

Circus acts, yes again, stunt and high diving show too.  We watched a diver drop into 10′ of water from an 80′ tower, you can see it in our video.  Of course there was music in the QuickChek tent where you could sit at one of the many large tables and enjoy your lunch or snacks.  In the tent they even had some free arts and crafts projects for the kids where they could make their own beaded name bracelets.

Unfortunately we simply didn’t have enough time to attend many of the shows, or see all the exhibits.  If you wanted to see the Batmobile or other famous and classic cars, they had them back again this year, a real crowd pleaser.

There is a great deal of excitement in ballooning and I love watching and recording the balloon crews preparing for a launch. They have to unload the balloons from their trailers, lay out the envelope (balloon) on the ground, inflate it with cold air using a large fan, then hooking up the basket and propane burners to heat up the inside.

Thousands of guests set up their cameras on tripods, blankets on the ground and watched the show as we did. We are fortunate to be on the inside of the fence which made covering this event even better.

Now, once the cold air has become hot, the balloon is than fully inflated and ready for flight. While the crew holds the basket down, passengers climb on board and away they go.

Where they land no one knows for sure and the pilot keeps in contact with his ground crew. The crew quickly loads into their van and take off so they can retrieve the pilot and passengers at the end of the flight.

Twice a day visitors could watch the mass ascensions of more than 100 balloons from around the world.  Many guests reserved a ride in one of the balloons at a cost of $225 for the morning ascension and $250 for the evening.  It is the safest to launch hot air balloons when the surface winds are less than 6-8 mph so the ascensions are at the two times during the day when winds are calmest – one hour after sunrise, and one hour before sunset.

For those looking to go up but would prefer to stay closer to the ground, you could take the tethered balloon rides at the festival at just $20 per person.  This would be a great opportunity to take some shots of the Festival Grounds from a high vantage point. Next year will give it a try.

One of the events we missed this year was the balloon glow.  This event has been compared to Christmas in July or flickering Japanese lanterns.  At predetermined signals, the pilots blast the propane burners, which releases a burst of fire into the balloon.  The balloons “glow” like huge fireflies, a truly magical scene, and one we are told should not be missed.

Two years ago we did watch Brett Michaels in concert during the day and loved it, so I would advise my readers to plan to go to the event at least two days, watch the concerts, walk the grounds and enjoy everything they offer and leave the evenings for the balloons.

Of course as we were leaving the event and getting into our car, we stopped to watch the wonderful fireworks display.

What a great day we all had at the event, now we have to count the days to next years festival and hope we have the same beautiful weather we had this year.

If you liked this article or video, please LIKE it and share it with your social media friends… 🙂