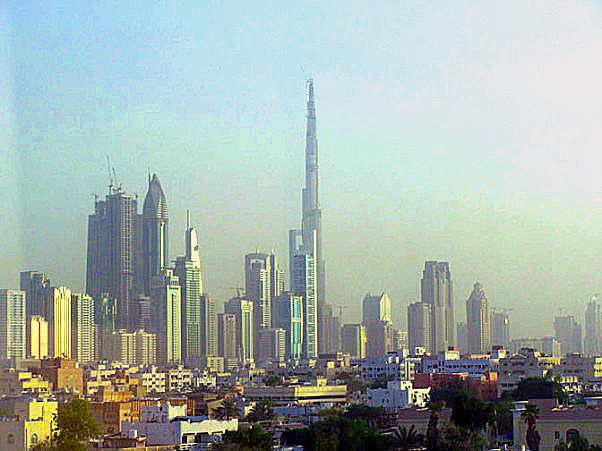 [dropcap]D[/dropcap]ubai has enough activities to keep visitors busy for weeks. But what if you’re here on business with only a brief amount of free time? Your best option for an overview of the city’s past and present is Dubai’s Big Bus City Tour. The hop on/hop off style allows visitors to spend as much or as little time at certain sites while bypassing others. Come on along to an incredibly larger than life city!

With plentiful date palm trees, its base was used to construct dhows (fishing boats) and camel saddles; the fruit was consumed – both fresh and dried – and the netted palm fronds tied with ropes for roofs on the traditional huts. Other readily available materials were also used in construction, such as sea stones and mud mixed with limestone to cement stones together; windtowers and air vents for cooling; and shell stones for building walls.

Dubai Creek, which runs parallel with the business district, is a natural inlet from the Arabian Gulf and not manmade. The city grew up around Dubai Creek – its lifeblood – at the start of the 20th century. Dubai’s expansive countryside was flat, which allowed for easy and natural construction of the city. The early city was surrounded by watch towers and had a fort for defense.

The Gold souq and Old souq were the first two stops, but I elected to continue on to the impressive Al Fahidi Fort. The fort was built circa 1787, although early Dubai history was not well documented.

Al Fahidi Fort was converted into the Dubai Museum in 1971 and the museum is housed within the fort. It offers a diverse collection of displays, life size dioramas, and hands-on exhibits as well as a fascinating insight into Dubai’s rich history and cultural heritage. 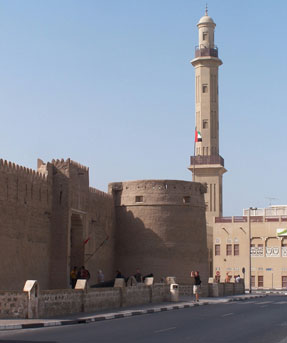 Because Dubai was located at a crossroads of international routes, it was exposed to foreign attacks. It was therefore customary for men to carry their personal weapons on them at all times in case of an emergency.

Commercial life, domestic life, Bedouin desert life, and life on the sea were all well-depicted sections of the museum. In the courtyard sit examples of early dhows and other wooden fishing boats in addition to a traditional basta house.

Windtowers were a popular and practical means of primitive air conditioning; a unique feature that created air circulation within a room. The shape of the towers, with their four triangular shafts, caught any passing breeze channeling the cool air down one side of the tower and forcing warm air up again through another.

Constructed in 1896, the Sheikh Saeed House is considered one of Dubai’s oldest buildings and a prototype of the traditional courtyard homes. Houses back then featured an inside courtyard surrounded by verandas. The majlis (meeting room) was at the main entrance facing outward. The house was a seat of Dubai’s government when constructed and was continuously occupied until 1958. It sat vacant and fell into disrepair before being restored in 1986. It is now one of Dubai’s landmarks.

The traditional dhow remains a common form of transportation for traders – and I passed numerous boats being loaded/unloaded of cargo – and the Arabian Dhow Creek Cruise aboard an abra is a relaxing way to tour the Creek. 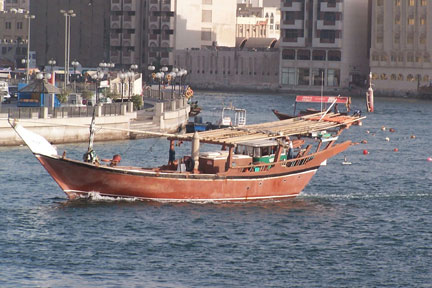 Craftsmen continue building these wooden dhows keeping old traditions alive and preserving heritage. At one time, these graceful sailing craft were the only link with other neighboring Gulf states, India, and Africa traveling the old spice trade water routes.

Present day Dubai and its estimated 1.4 million people, vigorous development, and breathtaking-pace construction has more cranes operating per square foot than anywhere else in the world.

I bypassed some of the shopping malls and instead changed to the blue line route. The day was fast approaching dusk and both bus routes were near ending time, so Atlantis on the Palm and Jumeirah Beach Park were for another visit.

There were two sites on my list that I still wished to see: Chill Out ice restaurant in Times Square mall and Ski Dubai in the enormous Mall of Emirates. Fortunately, both were open late, and with taxis very reasonably priced in Dubai, this was my next mode of transportation.

Being from Minnesota, I am no stranger to cold and ice, but I still wanted to prove I had been inside the ice restaurant. Admission was a bit steep, although it did include juice served in an “ice glass”. The restaurant is a constant 30 degrees F (-1 C), but even so, it seemed too cold to actually stay and enjoy a meal while donned in gloves, oversized boots and jacket. The ice sculptured tables, chairs, menu, glasses and serving plates, and ice accessory decor with its tantalizing blue and pinkish lighting was a sight to behold. Entry was through a freezer door. Once inside your stay is as short or long as you wish. 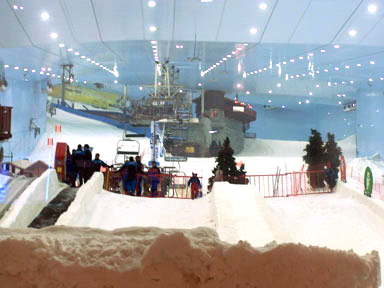 My final stop in this whirlwind Dubai tour was Ski Dubai in the Mall of Emirates. If you’re not into skiing or prepared to learn, staring through the glass windows at this unbelievable feat of snow and ice might just change your mind. But if not, the shopping options and entertainment spots will.

Ski Dubai has indoor ski runs, chairlifts, snowboarding hills, a snow park for youngsters, a twin-track bobsled racing oval, and a snowball shooting gallery. Here the temperature is a constant -1 to -2 C (25-30 F) and a very popular playground for young and old alike.

The snow-making process involves atomizing liquid water to create a cloud inside the building. This cloud is then “sprinkled” with ice particles that allow snow crystals to form. Ski Dubai holds more than 6,000 tons of snow, and is the third largest indoor snow dome in the world. There are some minimum skill requirements for skiers and snowboarders.

One can’t help but be impressed with Dubai and its clean streets, uniquely designed skyscrapers, Burj Dubai – the world’s tallest building – still under construction – and no oil reserves to pay for it. It has only been thirty years since Dubai began its development and determination to become one of the most urbanized and modern cities in the world.