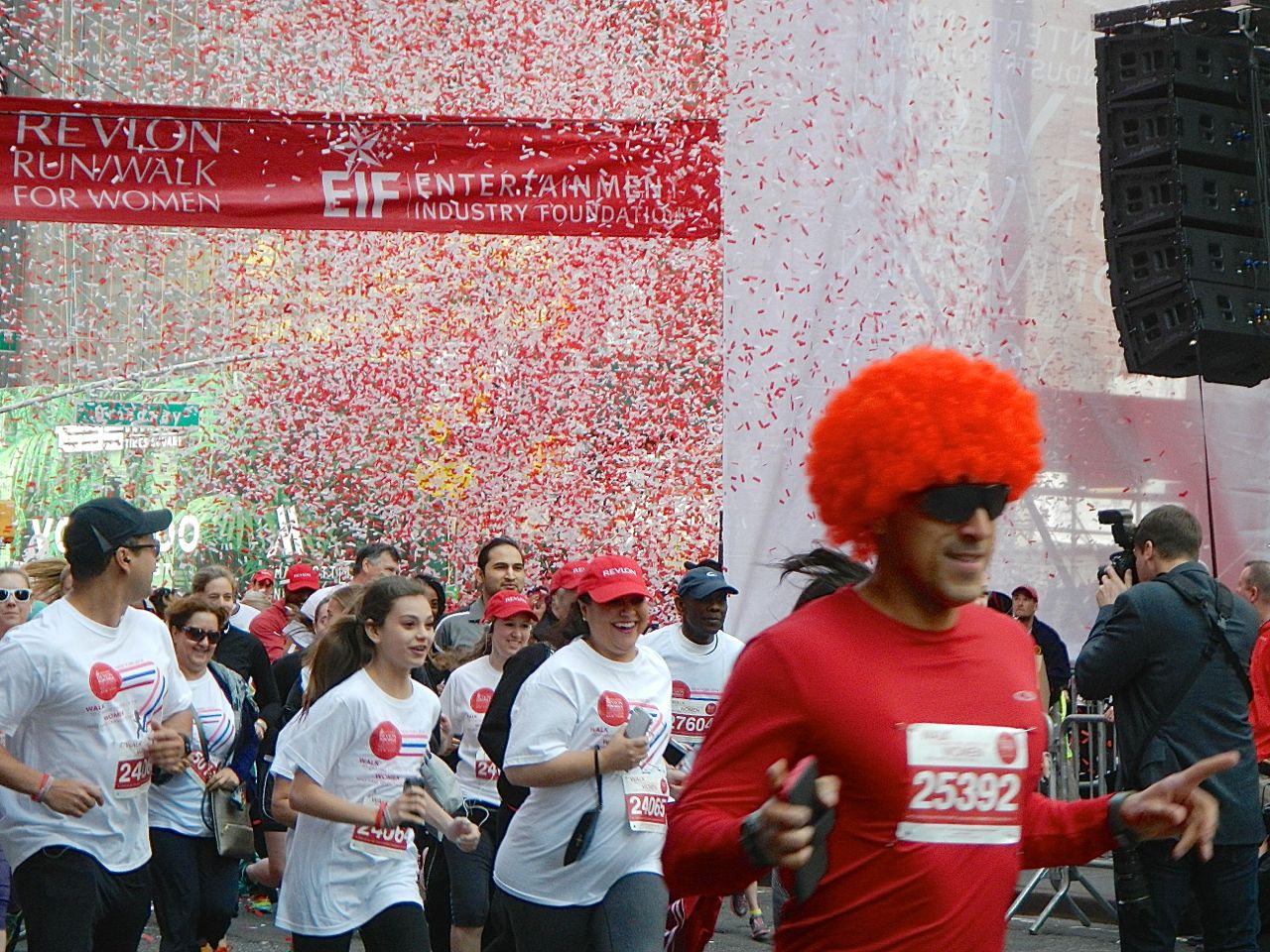 Article and photos by Len Rapoport, with assist from Gladys Rapoport

[dropcap]M[/dropcap]y wife Gladys, who assists me at many of the shows and events we cover for IMPress Magazine and IPA,  is a double breast cancer survivor. For the past 15 years she has been a participant in the EIF (Entertainment Industry Foundation) Revlon Run/Walk for Women which was held on May 3rd, 2014 in the heart of New York City, Times Square. 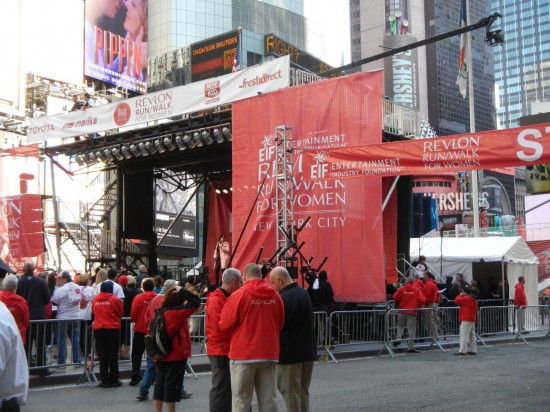 This year was no different then the past 14 years she has attended this event. Her team Travel Pavilion included her long time travel business partner Marcia Feinstien and friends Annette Kushner and Cindy.

They all started collecting donations from their  friends, family and business associates weeks before the events start date so they would be ready for the walk.  Over the many years they have collected thousands of dollars to help support the pioneering research, diagnostic treatment services for medically under-served women, and other services and support to women facing cancer.

This year I decided to cover the event.   I was going to tag along with the women and try to get some photos, although it is not easy with so many people walking and running along the events route. I didn’t take my normal gear with me, it was really about the event and Travel Pavilion’s participation. Since I was still waiting for my NYPD Working Press ID to come in, I was not able to gain the access I would have liked to get closer to the stage and have access to other areas that would have given me better photo ops.  Next year I will be ready.

We arrived at 7:00 AM in Times Square and since I have Press Plates on my cars, I will able to find parking on the street only a block away, from the registration area. This is where we had to go to pick up the numbered bibs and T-shirts. The registration area is always busy with donations which  were being dropped-off. Those that hadn’t previously registered did so there.

There is a $35 registration fee for all participants who register on-line or before the event and $45 the day of the event.  The registration fee helps cover the cost of producing the EIF Revlon Run/Walk for Women, and includes a participant t-shirt and goodie bag. Donations are the way the event raises the funds to help fight women’s cancer and over the years has raised over $70 million dollars and has brought awareness to this fight.

It was a beautiful Spring day, one couldn’t ask for a nicer day for this event.  It was brisk in the morning, but not cold and the sun was shining as it should for all who participated for this worthy cause. 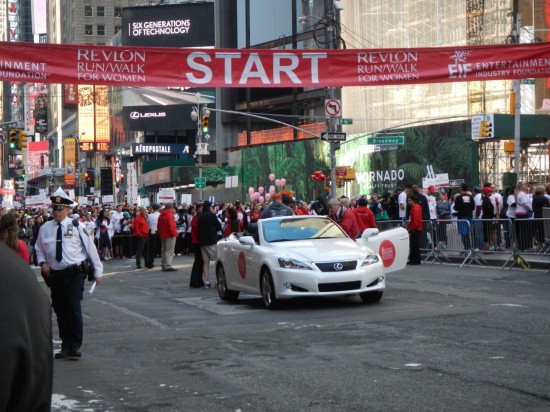 The route started in Times Square, continued up to 59th Street where the participants entered Central Park South and then through the parks East Drive, crossing the park to the West, moving North and finishing at 72nd Street in Central Park.

At 8:00 AM, the celebrity opening ceremony began with Revlon’s brand ambassador Emma” Stone. Emma  can now be seen in Spiderman 2  currently in the theaters.  Along with Ms. Stone was TV exec, host and author Andy Cohen and together they talked about the important works being done in cancer research.

With a loud blast of the horn and an explosion of red and white confetti the run/walk began.

Unlike many other events, this was not a timed event, although there was a timing clock at the start line at mile markers and at the finish line.   Those that like to keep track of their own time were able to do so. Some walked, some ran, and some brought strollers with their children.  We saw all people of all ages, participating, even some in wheel chairs.  It was a grand event for the participants, the Revlon support staff and volunteers.

Since participants weren’t allowed bags of any sort including camera bags, security was tight as it should be, I hung my little Nikon Coolpix around my neck and grabbed some shots during the day, that was until my battery decided to die. 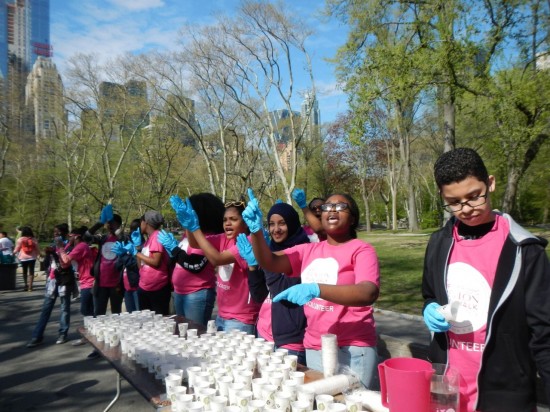 Some of the other activities during the day included, Finish Line Festivities and Commemorative Survivor Photographs.  Volunteers where there to cheer the participants and offer water and a snack item  along the route and as they crossed the finish line.  This included additional sponsor snack items in the participant bags, and was available as they crossed the finish line.

The course is just short of 3 miles to the finish line, but team Travel Pavilion went the extra mile and instead of taking transportation back to Times Square walked the additional 3 miles back.

Gladys and her team members walked at a brisk pace of 3.5 miles per hour and was able to complete the round trip in under 2 hours an impressive feat for my wife (who is now 70+ years old) and the rest of the team.

Thanks to the gals for letting me tag along with them on what proved to be a wonderful day of love and hope for those that have survived and those that have passed, but not forgotten.

There is a wonderful Flickr feed with loads of photos from past Run/Walk events.  To find out more about this organization and their upcoming Run/Walk events in both New York and LA, visit their website.

Created in 1994 through the committed and collective efforts of the Entertainment Industry Foundation, Lilly Tartikoff and Ronald O. Perelman, the EIF Revlon Run/Walk for Women has grown to become one of the nation’s largest single day fundraising events. To date, the Run/Walks (in Los Angeles and New York) have distributed over $70 million for cancer research, treatment, counseling and outreach programs. Thanks in part to these funds, new treatments are being developed and lives are being saved