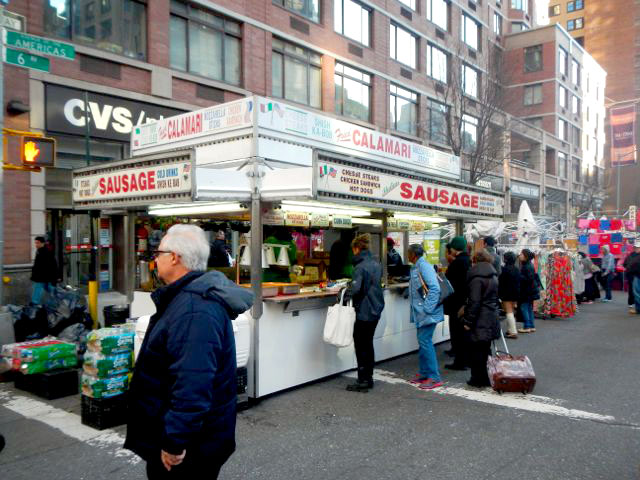 We all love to attend street festivals and many cities and towns run them, but probably none can compare with the number of street fairs or festivals to those held in New York City.

New Yorkers love to come out in the Sprint and Summer seasons to stroll the closed off streets and purchase everything from authentic New York food to trinkets and treasures offered by the many fair participants.  We decided to check out the 6th Avenue Chelsea Festival which was held on Saturday, April 5 on 6th Avenue From 23rd To 32nd Street.

We arrived into the city late that day and had a previous dinner engagement at 6:00 PM on 23rd Street.  We parked our car on the street on 25th Street off of 6th Avenue and decided to stroll through a few blocks of the festival.  Police were present to close off the streets and direct traffic from the side streets that crossed 6th Avenue.  Now most of the street festivals we have attended in New York were usually uptown on one of the less trafficked streets.  There is one coming up soon we like to attend and that is the 24th Annual Upper Broadway Spring Festival on Saturday, April 12 and runs from 110-116th Streets on east side of Broadway.  Now those street festivals usually don’t disrupt much traffic and are well run.

Unfortunately the 6th Avenue Festival created a massive traffic jam for traffic attempting to go dross town on the very busy 23rd Street that is the main street running from the east to west side.  Other main crosstown streets include 14th Street, 34th Street, 42nd Street, 59th Street and others.  Now on a Saturday that has beautiful weather things get even worse and 6th Avenue being a major South to North main avenue is especially busy on a Saturday or Sunday afternoon.

There was no way to move once you were boxed in.  Sirens sounded as emergency vehicles attempted to enter this area. Cross streets were a bit better since they were still moving from East to West through festival streets. We spoke to some of the drivers on 23rd Street and to local police that were controlling some of the cross town traffic. Standing on the corner of 23rd Street and 6th Avenue, we noticed that all the police we saw only two blocks north and the others we saw standing near their police vehicles, there was none to help direct traffic on 23rd Street and 6th Avenue.

One would think that when you create a major bottleneck like this in one of the busiest cities in the world that you would make sure that someone, anyone from the police of traffic department was there to attempt to keep the flow of traffic moving. At 5:30 PM as the Festival was closing and the traffic was at its worst, the only thing that was attempting to control the traffic were the traffic lights…and you know how effective that can be when people attempt to cross the streets and cars continue to push through the mess.

Robert from Englewood Cliffs New Jersey said: “I can’t understand why the City would allow this Festival.  They have stopped all traffic going up or downtown, east and west and for what?  Same junk they sell at flea markets and the same food you can get anywhere in New York.”  He was mad that he has to sit in his car on 23rd Street to go one block for 20 minutes.

The police we spoke to seemed relaxed since the day was ending.  They didn’t seem to be too concerned, as the cross town traffic stopped and only moved a few cars each time the lights changed.  I asked one of the officers if it really makes sense to tie up traffic as New Jersey did during the George Washington Bridge debacle for a local street fair. He replied they had no official comment, they just do what they are told. I had a sense that he agreed this could have been handled better.

If you watch our video you will see that sirens from emergency vehicles and ambulances couldn’t move as well.  Lives could be lost and people’s tempers rise when these ill planned events take place in a city like New York.

We all love to stroll on a nice Spring or Summer day through a street fair, but one has to ask, is it worth closing vital streets and avenues and putting peoples lives at danger to do so.  I for one will only attend those street fairs what are done with consideration of the public and are usually held on less important or busy streets in New York. After all, I can get the same merchandise and local food cart food at anyone of these festivals.

I think the best idea is the smaller Green Markets that we see in New York.  They utilize the sidewalks for these markets are open each Sunday from Spring through the Summer and there is never and major disruption of traffic.  Of course you can’t have a hundred or more vendors there either.
[signoff]