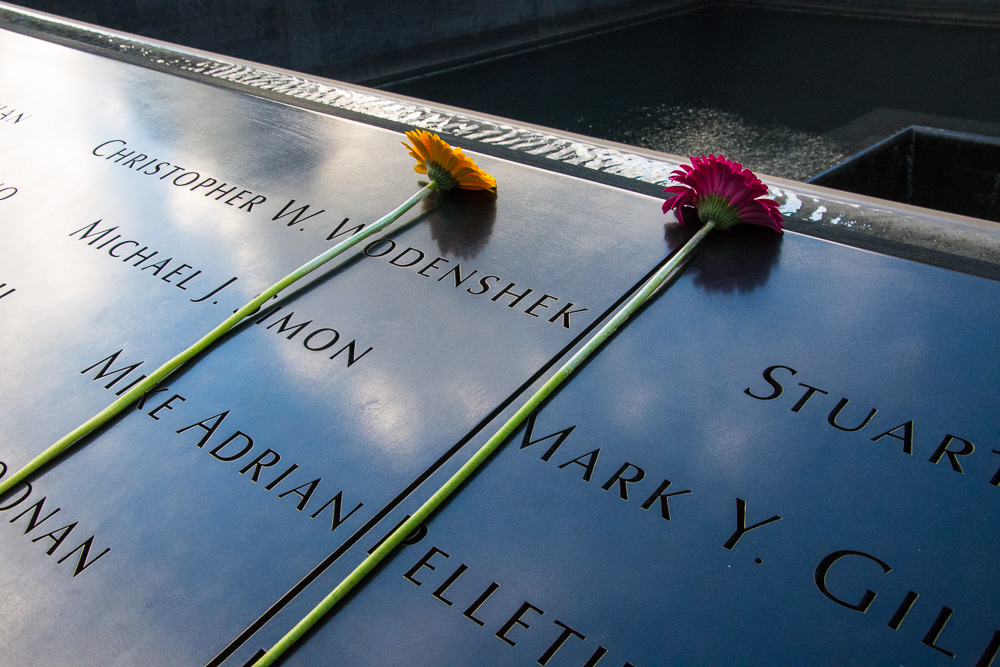 On September 11, 2001, at 8:45 a.m. on a clear Tuesday morning, an American Airlines Boeing 767 loaded with 20,000 gallons of jet fuel crashed into the north tower of the World Trade Center in New York City. The impact left a gaping, burning hole near the 80th floor of the 110-story skyscraper, instantly killing hundreds of people and trapping hundreds more in higher floors.

As the evacuation of the tower and its twin got underway, television cameras broadcasted live images of what initially appeared to be a freak accident. Then, 18 minutes after the first plane hit, a second Boeing 767–United Airlines Flight 175–appeared out of the sky, turned sharply toward the World Trade Center and sliced into the south tower near the 60th floor.

The collision caused a massive explosion that showered burning debris over surrounding buildings and the streets below. America was under attack. 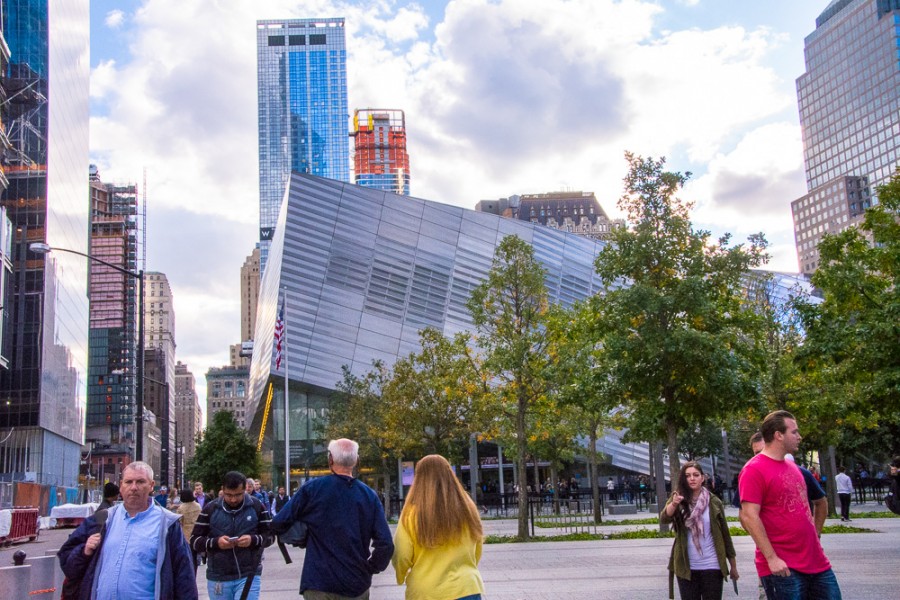 I had arranged for media passes for the museum so we didn’t have to wait on the very long lines for the 911 Memorial. As we walked through the grounds and past stopped at the reflection pool, one of two, looking at the engraved names of those that were lost on 911, we realized this would be very different from the many museums we have visited in the past.

As you can see from my photos there were flowers next to names of loved ones that had perished, left by family, friends or those that visit this memorial. As we entered, we realized that security was a serious issue, with x-ray screening similar to those at the airports, reinforced pillars that surround the entire property to prevent attacks by vehicles with bombs and security guards present and visible. 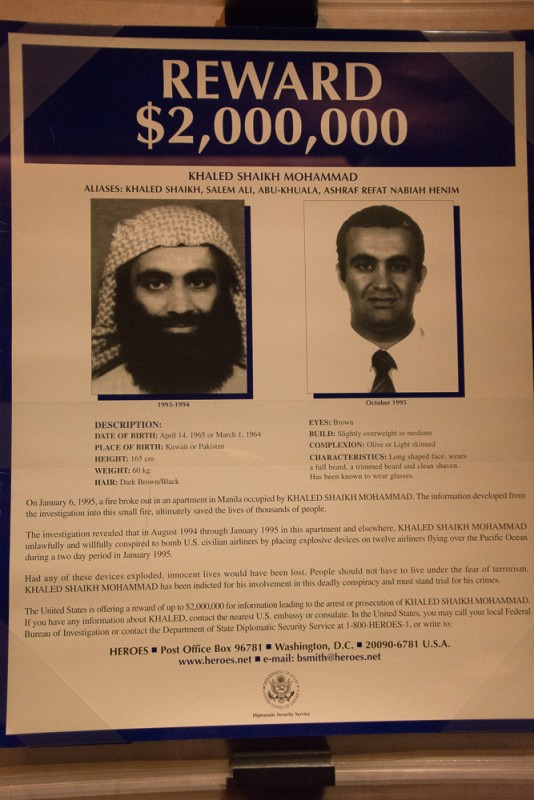 This museum as you can see in the photos is a great tribute to those that lost their lives in the building and those that were the first responder’s, but also to those in the four planes that were hijacked by 19 militants who were associated with the Islamic extremist group al-Qaeda. They hijacked four airliners and carried out their suicide attacks against targets in the United States.

Two hit and exploded into tower one and tower two of the World Trade Center, one hit the Pentagon in Washington, DC and the fourth was forced to crash in a field in Pennsylvania. This fourth plane was headed for the nations capital, the White House, the U.S. Capitol, the Camp David presidential retreat in Maryland or several nuclear power plants along the Eastern seaboard. It was the heroism of the passengers and crew on  flight 93 prevented this from happening.

In the museum exhibit we hear the voice recordings and telephone calls from the passengers on flight 93 and the  voices of the terrorists during that flight as well. After the presentation, we walked away shaken and with tears in our eyes.

I don’t think anyone can truly understand the horror of that event. I know we all remember where we were and the frightening reports, but a visit to the museum brings all of our initial fears and thoughts to a sobering reality. Seeing the photos and reading the profiles on the walls of the thousands of victims of this horrific attack is truly heart wrenching.

For more information on 911, please visit history.com for articles, videos and photos. 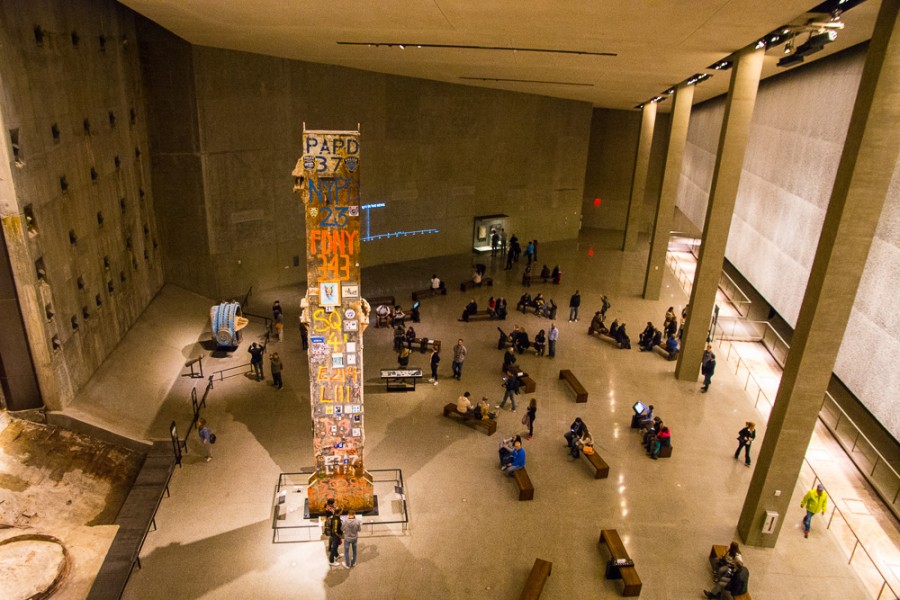 The 110,000 square feet of exhibition space are within “the archaeological heart of the World Trade Center site.” The museum takes visitors underground — literally. It lies 70 feet below ground, so entering the museum involves descent from the light of the outside into dimly lit depths, which adds to the overall power and pathos of this hallowed ground.

A variety of fascinating exhibits reveal the makeup of New York City’s impressive bedrock, like a 450-million-year-old chunk of Manhattan schist, excavated in August 2008. WTC’s architectural grandeur is also showcased via a large-scale model, originally built-in 1969 to 1971, which is one of the largest and most detailed WTC presentation models still surviving today. It’s a powerful piece, because it highlights what the World Trade Center was, rather than what became of it.

Learn more about the museums exhibitions 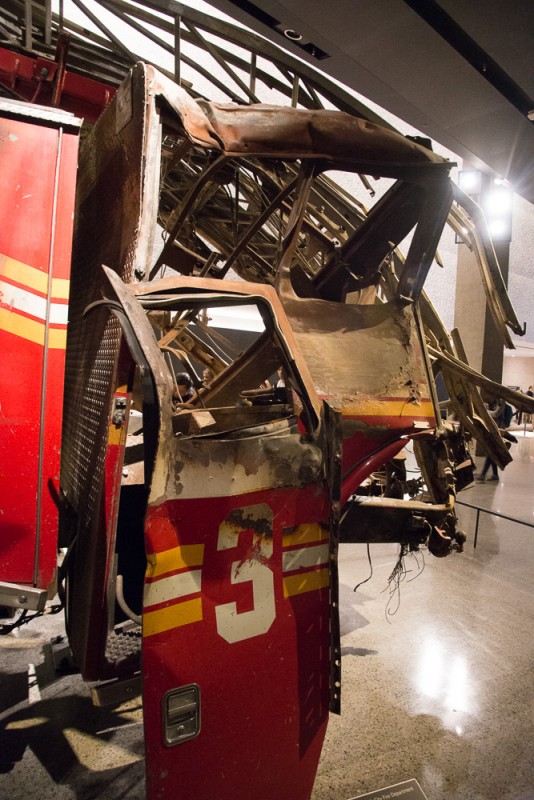 The collection houses more than 10,313 artifacts, including 2,136 archival documents and 37 large artifacts like first responder vehicles and monumental steel that are already on site.  You will see some of these in my photos, but the photos will not do justice to the reality that sinks into your stomach and your heart as it does listening to Robert De Niro’s narration of the events.  You can rent a portable device with headset for $7 at the museum or you can do as we did and download the free app 9/11 museum audio guide which we did.  Once installed you will be asked to also download the language of your choice and we waited for a couple of minutes for that to be completed.  Once done, we were set to explore the museum guided by DeNiro.

I have uploaded all of the photos I shot that day to my Flickr account for easy access and viewing.  Although my images are all copyrighted I will allow individuals to download those they wish for their private use only.  For permission to use my copyrighted images for blogs, publications or any other commercial use, please contact me for permission.

You may view the images here, for a better view and slide show click the image to be taken to the Flickr site and select the way you would like to see these stunning full-sized images. 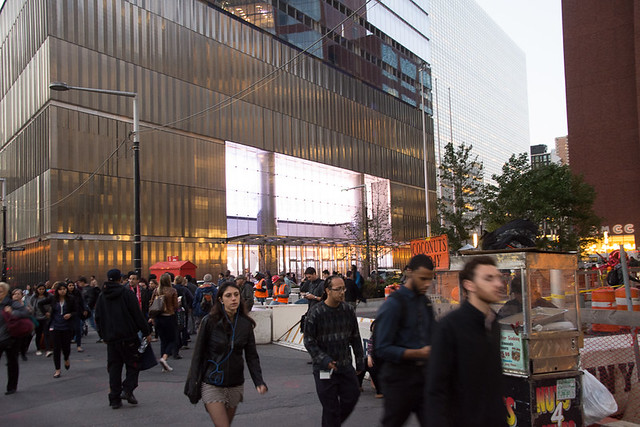