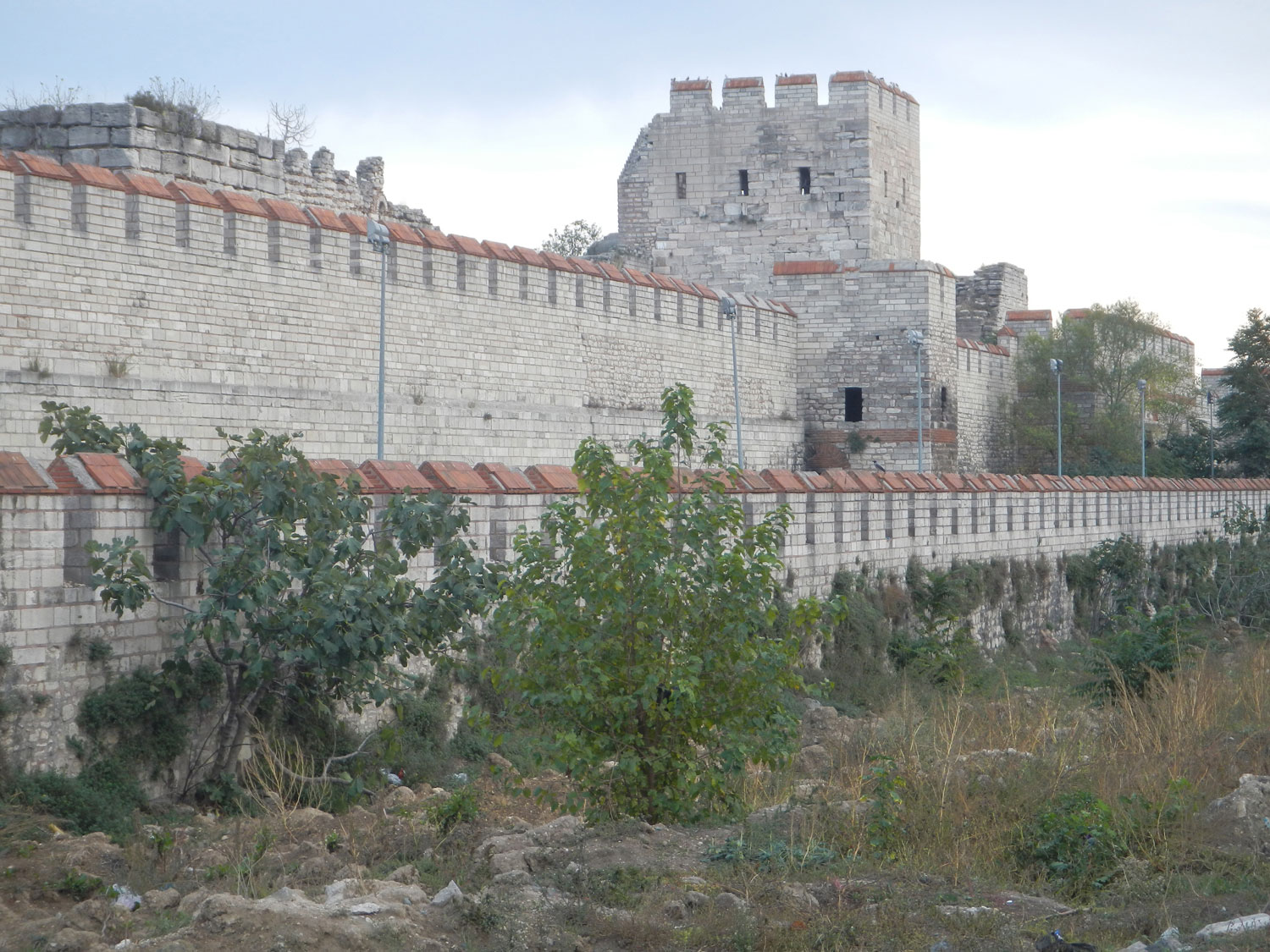 [dropcap]C[/dropcap] rumbling walls and broken-down towers are a testament to Istanbul’s ancient past. The depth of history is as thick as the weather-beaten walls slowly crumbling back to earth. Perhaps it is a matter of destiny.

During our Bosphorus Strait cruise, we had great views of Rumeli Fortress and its sea walls. With piqued interest and a love of history, once back on land, our adventurous spirits intact, we were determined to search out the land walls before departing Istanbul. After all, with the history that swirls around this capital of three major empires, the walls surrounding it were imminent players in its story.

The Sea Walls were architecturally similar to the Theodosian Walls, but of simpler construction. A single wall, they were considerably lower than the land walls. A heavy chain or boom supported by floating barrels and stretching across the mouth of the Golden Horn’s inlet prevented the enemy from accessing the city.

A panorama captivating in its harmony of land, sea and sky as seen from the Marmara Sea, Rumeli Fortress, built in 1452 by Sultan Mehmet II prior to the conquest of Istanbul, was finished in a remarkable four months and nineteen days.  The objective was to block any possible sea support for the Byzantines that might be coming from the Black Sea. As a result, the sultan had the fortress constructed on the narrowest point of the Bosphorus strait, facing another smaller fortress (Anadolu) that was currently situated on the Asian side.

Rumeli Fortress consists of three large and one small tower with walls among them reinforced by 13 small watchtowers. The land it was constructed upon belonged to a Greek monastery. Cannons were mounted on the main towers.

The fortress was severely damaged in an earthquake in 1509. It was repaired and used throughout the 19th century as a customs checkpoint and prison. The fortress was restored for the 500th anniversary of the conquest of Istanbul. Today it is a museum displaying the same cannons that were used during the conquest.

Rising regally on the banks of the Marmara Sea, the Byzantines consistently restored the sea walls while the Ottomans largely ignored them after their conquest. Only the walls underneath Topkapi Palace were restored since that section was used as walls of the palace’s first courtyard.

With fishing villages and important harbors along the walls, gates (doors) were constructed within the walls to access the harbors.

Old Istanbul is surrounded with defensive stone walls  – in various states of disrepair – built during the Byzantine period beginning in the fourth century by order of Constantine the Great. In total, there are 46 small and large gates (doors) along the land walls with a small moat in front. The original moats were 33 feet deep and more than 65 feet wide. Today, all that is left are shallow ditches.

Anthenios, governor of Constantinople, supervised the wall construction that tightly embraced the town. The highest point was strengthened by 96 towers and rose 76 meters (349 feet) above sea level. Most of the towers are 82 feet high. Forty-six gates of varying size along the walls provide connection with the city, while only five of them are considered major gates.

With numerous additions and modifications during their history, the walls of Constantinople were the last great fortification system of antiquity, and one of the most complex and elaborate systems ever built.

As Constantinople prospered in the fifth century, Theodosius II ordered the famous doublewide Theodosian Walls built to further fortify the city. The 23-foot high walls have 33 feet between them. Although the other sections of the walls were less elaborate, when well manned, they were almost impregnable for any medieval besieger, saving the city, and the Byzantine Empire with it.

Unfortunately, with the advances of gunpowder, cannons rendered the fortifications vulnerable. Nevertheless, cannon technology was not advanced enough to be a formidable factor alone for the Ottomans to capture the city. Historical accounts indicate that the walls were repaired between reloading. Ultimately, after a six-week siege, the Ottoman forces succeeded in besieging the city on May 29, 1453.

The wall’s remains are a testament to their strength and construction. To get there, stop at a token machine, nearby each stop, and buy the red tokens. One token equals three Turkish Lira ($1.67). Board any train going west and head down the line for about 15 minutes, passing Istanbul University on your right. Disembark at the Topkapi Ulubath stop, walk another three streets until you come to the massive 1600-year-old land walls, including the famous Theodosian, piercing into the road splitting the stone walls. You can either cross the street and walk to your right or stay left to view the semi ruined walls and crumbling towers in various stages of collapse. If you go left, as we did, you eventually come to a land gate where traffic passes through into a somewhat run-down neighborhood. It’s worth exploring; remember you are on an adventure. Friendly kids were playing nearby and approached us, but none seemed to understand English, and we were unable to comprehend them. Smiles and waving, however, broke through communication barriers.

Do not, however, linger past dark as gypsies and homeless people have taken over the area. We went mid afternoon and had no problems. Wandering along the stone barriers, the tops of tents were discernable between the two walls where gypsies were living. They even smiled when I took their picture. When finished, retrace your steps back to the light rail street and catch the train back down to Sultanahmet where you began.

With so much for first-time visitors to see, making time to discover the ancient sea and city walls – experiencing history on your own terms – is well worth the effort.