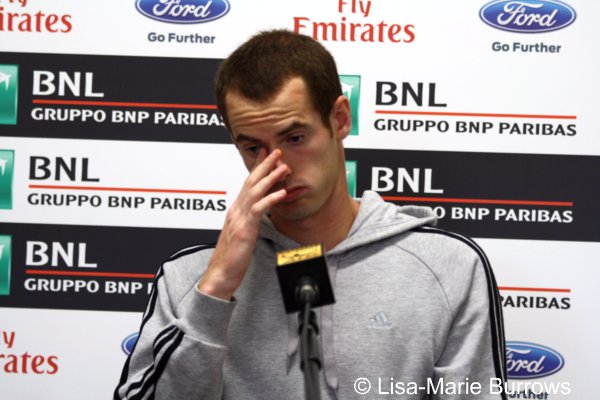 Internazionali BNL D’Italia, Rome – A withdrawn looking Andy Murray attended a press conference yesterday after his 7-6 (1), 3-6, 2-6 defeat at the hands of Richard Gasquet. His eyes were downcast, shoulders slouched and head lowered as he mumbled into the microphone. In front of us was a man who was clearly lacking in confidence, bewildered with the outcome of the game and uncomfortable as he twitched awkwardly in his chair whilst occasionally flexing his back, but how much did it hamper his performance?

[quote]“It was a long match and I had a sore back towards the end, but I was expecting that coming to the tournament and I didn’t take a break but training and playing a lot – the muscles are more tired and fatigued.”[/quote]

Andy Murray did not want to go into detail as to where and how he sustained the injury or how severely it impedes his matches, but he has experienced the injury since December and with the French Open, Wimbledon and the US Open coming up, the Scot has little time to recover and treat the niggling he is inflicted with.

Ultimately this may have knocked his confidence before the start of the second Grand Slam of the year at Roland Garros as his preparation has not gone to plan as per previous years. He withdrew from Madrid last week and did not play on the infamous blue clay and this week has participated in only two matches against Nalbandian and Gasquet:

Right now, Andy Murray is considering flying to Paris immediately to get some extra practice on the clay courts and train hard (back allowing) for the next nine days. He hopes to work hard at the gym, get into shape and adapt to the conditions of the courts with his coach Ivan Lendl who will be with him for 5 or 6 days in preparation.

Murray was philosophical about his injury and tried to find the positive side to the treatment he will need to undertake, believing that sometimes pains and injuries can get better when a player plays with them and his 2 hours and 40-minute match was certainly a good test for him.

For Andy Murray, no Cup Final visits for him this weekend as he will be in Paris recuperating and training – a positive decision in preparation for the French Open. Hopefully he will feel better soon!