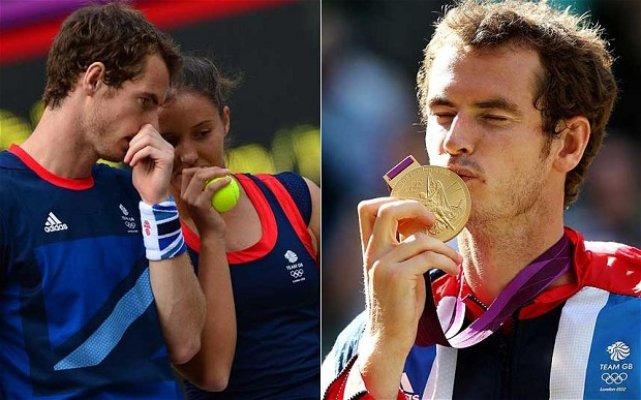 Britain’s Andy Murray delighted the home crowd on Sunday after he became the first British man to win an Olympic singles gold medal in 104 years at the All England Lawn Tennis Club in Wimbledon after defeating world No.1 and 7-time Wimbledon champion Roger Federer 6-2, 6-1, 6-4 in just under two hours at the Olympic tennis finals.

Four weeks ago, a heartbroken Andy Murray left the Centre Court of Wimbledon in floods of tears, with stained cheeks and a broken heart at the hands of a merciless Roger Federer.  Fast forward nearly a month and the British hopeful left court on Sunday with a gold medal in his hand, joy in his heart and his eyes were dazzling with happiness – he is the Olympic gold medal champion.  What made the achievement more awarding? It was against Roger Federer, one of the greatest players of all time, who beat the Scot in the finals of Wimbledon and shattered his Grand Slam dream victory after defeating Murray in four sets.

Murray has had his chances in Grand Slam finals, losing twice to Roger Federer at the US Open in 2008, at the Australian Open in 2010 and also to Novak Djokovic in 2010 in Melbourne.  It seems like all of his career, he has had to take on the tennis giants of Roger Federer, Rafael Nadal and Novak Djokovic – the top three guys who have dominated tennis for so long and during the major events, when it counted the most, he has never been able to come up trumps.

On the green grass of Wimbledon, Andy Murray returned hungrier than ever, eager to banish memories of THAT defeat a few weeks earlier and he looked more relaxed than we have ever seen him. Rather than looking as though he was feeling the pressure from the home crowd, he appeared like he was relishing it and drawing their support and energy from them into his game. He seemed a different player, he struck the ball like a different player and he handled the pressure like a professional.

“It is the biggest win of my life. This week’s been absolutely incredible; I’ve had a lot of fun. I felt so fresh on the court today. I didn’t feel nervous really at all, apart from at the beginning of the match. The support’s been unbelievable.”

Many questioned his physical fitness going into the match (including me!) after playing two mixed doubles matches the previous day with Laura Robson and how fatigued he may feel coming into the finals match in a potential five-setter against Roger Federer and from the onset Andy Murray made his intentions clear – he meant business.  Despite facing break points in his opening service game it was the Scot that dominated the rallies, found the corners of the lines and played with great finesse and accuracy that would make the great Roger Federer himself proud.

It was the first time since 2002 since Roger Federer had lost a match in straight sets at Wimbledon and that was against Mario Ancic.  Andy Murray used his animal instincts to keep hunting down the ball and fighting for every point, even Federer admitted that there was very little he could do against the British No.1:

“He played very well. He was better, much better than I was today. But still, I’m happy with my silver.  Andy looked like he was never doubting himself, he had a clear plan and he came through.”

Came through the Scot did. He came through heavy expectation, a disappointing loss a few weeks before on the very same court and he came through against himself, fighting off any thoughts or doubts in his mind of his last defeat at the hands of Federer. It could have been very easy for Murray to feel subdued and hard done by after another defeat in a Grand Slam final but he knew that you are not defeated when you lose; you are defeated when you quit.   Like so many other athletes and fellow players, that word is not part of his repertoire and that is what has helped to shape Murray along with other tennis current tennis greats such as Roger Federer, Rafael Nadal and Novak Djokovic to help him win.

After his exquisite victory, Murray had very little time to recover as he was back on court within an hour fighting for another gold medal with young compatriot Laura Robson.  Unfortunately for the British pair the Belarusian’s were too strong and they walked away with silver – which is still a medal that they are delighted to get their hands on.

Never again will Andy Murray have another chance to win the Olympic Gold on the Centre Court of Wimbledon – it is certainly the best day of his career and the best day of his life and no doubt he may have many more fantastic career shattering moments to come. Andy Murray proved that tough times never last, but tough people do. He got knocked down at Wimbledon and got back up fighting even stronger. That is what an athlete should do. It’s what an Olympian should do and more importantly it is what Andy Murray did.