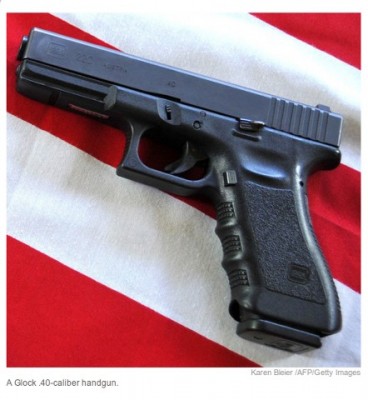 America seems to have a love affair with guns. But has it always been this way? Let’s take a closer look.

It says: A well regulated Militia, being necessary to the security of a free State, the right of the people to keep and bear Arms, shall not be infringed. [2]

Why did the Founding Fathers find it necessary to include this amendment in the framework of the U.S. Constitution? While there is much [3] debate on the issue, whether it is a civil liberty or state right, one thing rings true: Citizens have always owned and used guns. The Founding Fathers perhaps felt that it was necessary to keep the Government from usurping power over its citizens, much like England did in pre-revolutionary war times. Some 80 years later, in 1871, we saw the formation of the National Rifle Association. [4].

Back then, vigilantism was the law of the land. Those with the most guns and fastest shots, ruled the day. Wyatt Earp and Tombstone, Arizona. Hand guns and rifles reigned as the Supreme law of the Old West. This type of thinking, dominated the early 20th Century, especially in the 1920’s which saw the rise of the Gangster Mentality. It wasn’t until 1934 that [5] President Franklin Roosevelt introduced the [6] National Firearms Act in an attempt to control automatic machine gun weapons.

In 1994, The Federal Assault Weapons Ban [7] was enacted. It was an attempt to control the use and distribution of semi-automatic assault type weapons. The trouble was, there was no definition of what an assault weapon is. In addition, a sunset clause was written into this ban. This allowed the law to expire one decade later, in 2004.

Arizona however has maintained that the 2nd Amendment is a state right, and has systematically dismantled gun control legislation. [8] Currently, only a simple background check is required to purchase a weapon. Anyone over the age of 21, is allowed to carry a concealed weapon. [9] No training, is required. In fact about the only places you can NOT carry a gun, is if a sign is posted outside, in a court house, or the state capital in Phoenix. Legislation is pending, to allow carrying a weapon onto state colleges and universities. The gun laws of today, do not seem any different then they were in Tombstone, Arizona in 1881. [10]

Let’s scrutinize some of the results of these gun laws.

In 1966, [11] Charles Witman at the University of Texas Belltower, in Austin, Texas, killed 16 people, and injured 32. He went to a hardware store, purchased an M1 Carbine.

In 1970, [12] on May 4, Four Ohio National Guardsmen killed 4 students, and injured 9. Why? The students were protesting the U.S. Government’s incursion of the Vietnam war into Cambodia. The guardsman fired 67 rounds in 13 seconds.

In 1996, [14] students Eric Harris and Dylan Klebold entered Columbine High School. They killed 13 people, and injured 21, before turning their 9 mm handguns, on themselves.

In 2002, [15] John Allen Mohammed and Lee Boyd Malvo aimed their Bushmaster XM-15 semi-automatic .223. They killed 10 people, and critically injured 3 others.

In 2007, [16] Seung-Hui Cho at the Virginia Polytechnic Institute and State University in Blacksburg, Virginia, killed 32, and injured 25. Weapons of choice: 9 mm, Glock 19, and .22 Calibre Walther semi-automatic.

On January 8, 2011 [17] Accused shooter, Jared Lee Loughner went to a supermarket Congress on your Corner, with U.S. Congresswoman Gabrielle (Gabby) Giffords [18]. He fatally shot 6 people, and injured 13, including Giffords. He used a 9 mm Glock. 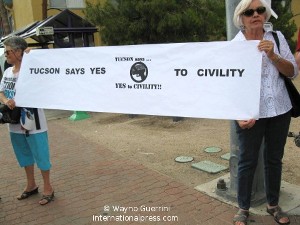 Showing little deference to those killed or injured in the January, 2011 Tucson shootings, Pima County Republican Party auctioned off a Glock 23 in August, 2011.[19] It is similar to what accused shooter Jared Lee Loughner had used, just 8 months earlier. This action drew severe criticism from the Tucson / Pima County Community. Republican Ward 6 Councilman Steve Kozachik,[20] was present at the Tucson says YES to Civility anti-gun rally just a few weeks ago. He represented the other side of the Republican Party that did NOT support the gun raffle. Tucson’s Green Party Mayoral candidate Mary De Camp had this to say: I think the Green Party should auction off a gun safe. I respect the right of other people to bear arms, though I am a pacifist myself…

Two things seem to fuel gun violence in Arizona. One was the Assault Weapons Ban sunset which occurred in 2004. [22] The expiration of this ban, provided Jared Lee Loughner with legal means to purchase a high capacity 30 round clip for his 9 mm Glock. Secondly, the Arizona legislature is considering allowing concealed weapons on Arizona’s college’s and campuses. [23]

These two items can only foster security and safety issues. What prevents any of these events from occurring again? Guns do NOT kill people. People do. But we need better screening and training, to prevent future tragedies such as these from happening. Perhaps just like in the movies of the Old West, the bad guy will help us out, by wearing a Black Hat.

“I ask for, not at once no government, but at once a better government.”
— Henry David Thoreau — Civil Disobedience