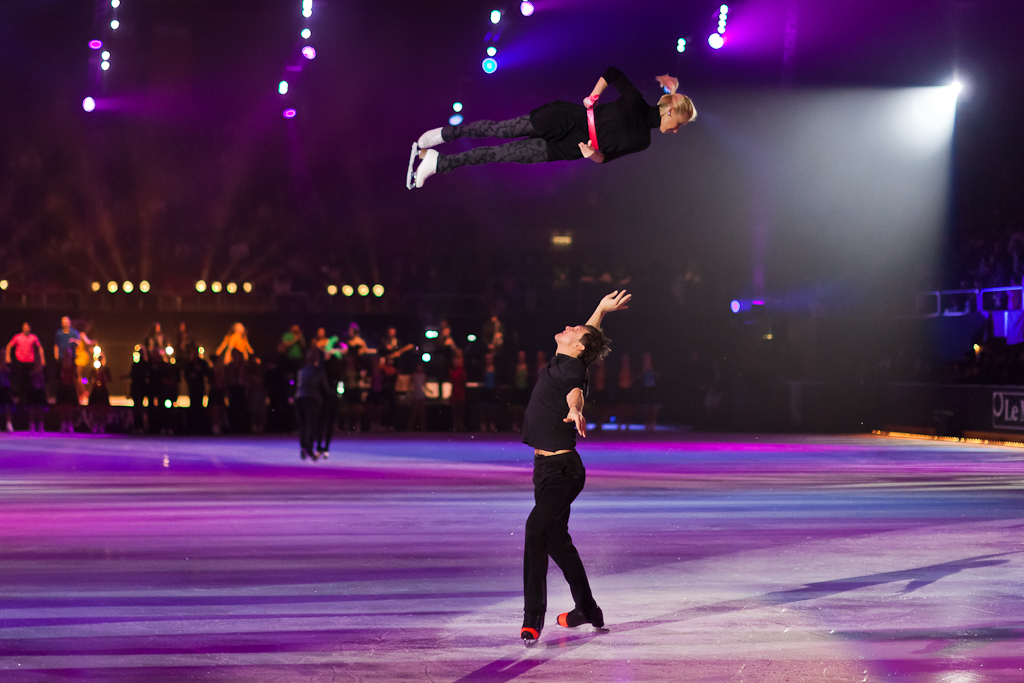 [dropcap]S[/dropcap]tarting as just a concept in Zürich, Switzerland in 1995, the Art on Ice production has grown year on year to become the premier figure skating entertainment event worldwide.  The Art on Ice world tour includes only around a dozen shows, but now is seen annually by over 100,000 live spectators and 10’s of millions of TV viewers.

Each year the program includes different performers, lighting, and overall production that makes each event very unique.  Art-on-Ice combines world-class figure skating choreographed to live musical performances.  It is all animated with engineered lighting on top of brilliant colors, acrobatics, with the finesse and beauty only seen in the sport of figure skating.

Over the 17 year history, musical performances featured international musical stars including Donna Summer, Chris de Burgh, Montserrat Caballé, Robin Gibb, Seal and many others.  The performances on the ice includes Olympic medalists and figure skating world champions.  To date, over 100 internationally famous musical and athletic personalities have taken the spotlight as part of the event.

With only the spot-lighting and the music turned up,  the enthusiastic  crowd of 9,000 in the Patinoire de Malley were entertained with a series of figure skating acts together with live musical performances.  The total program running time was just over 2 and one-half hours.  Despite the exceptionally cold and windy weather of both evening shows, the events were full to capacity.

The formal attire of the announcer,  musicians and athletes gave the evening(s) a black-tie feel.

Stéphane Lambiel, the two-time World Champion and Olympic silver medalist performed a choreographed  rendition of the musical piece “My Body is a Cage” accompanied by child prodigy pianist Emily Bear and powerful vocals of Rhonda Dorsey.

The act started in a symbolic cage of spot-light beams – Stéphan’s skating was  artistic, acrobatic and his movements very fluid and full of emotion.  Everyone watching the performance could see it is evident Stéphane is passionate about his skating.

Skating for an audience of his home country, Stéphane was well received.

Sarah Meier is the Figure skating European Champion of 2011 and Swiss national champion winner for eight of the last 11 years. Sarah is the skating sweetheart of Switzerland and  she received a special applause from the audience for her choreographed version of “Not Myself Tonight”.  Sarah also skated to music of a live rendition of the well known Simply Red song “Stars”.

One particularly visually catchy and colorful act was performed by the Swedish synchronized skating group “Team Surprise”.  As five time world champions in synchronized skating, the group certainly delivered a visually stimulating and fast moving performance.   Each performer wore a different color outfit, which made for a stunning rainbow in motion.  The skaters quickly skated through formations of straight lines, circles and interlacing  geometric patterns.

Each of the performances were uniquely entertaining with visually fresh and unique themes.  The Italian skating couple Anna Cappellini and Luca Lanotte were no exception and dressed Western American style, they danced and skated to a knee-slapping barn-dance musical piece.

Japanese skater Miki Ando Performed a choreographed act to the music of Pyotr Tchaikovsky`s “Swan Lake”.   With a touch of class her elegant skating was a graceful and classical ballet style act.  Miki’ s outfit was a a play on the theme and a swan motif.

French-Brasilian origin and 2011 European Champion Florent Amodio lived up to his title with a sassy-jazzy rendition of “Mess Around” by Ray Charles.  Accompianied by Emily Bear on piano.  Florent’s performance was fast moving and unpredictable, with tight spins and several axel-jumps.

Without question, watching the acrobatics of this skating pair was one of the shows many highlights.  Seeing the  high and long throw-jumps were thrilling.  Each one soliciting strong applause from the audience.  Maxim, a very tall 188 cm (6’ 2”)  athlete appears strong and yet graceful.

The shows were punctuated with a particularly different performance from Russian-Armenian performer Gev Manoukian.   Gev turned a humorous silver dressed robotic character into a breakdancing star after a robotic act and a stumble from the stage .  He performed a break-dance routine on ice.  He appeared to defy gravity with un-natural and yet smooth movements with amazing flexibility – often leaving contact with the ice.  The audience was transfixed as this act was very unique from the others.

Art on ice is a beautiful and colorful mix of figure skating, stage dancing, live music, choreographed lighting in one.  Rarely does one get to enjoy so many different forms of entertainment in a single event.   I was only an arms length from the ice arena.  In spite of the pressure as a press photographer to capture the best images throughout the entire show, I was tempted several times to put my camera down to simply experience the performance.

It is difficult to put into words how impressive this live event is.   Photography leaves out many of the various elements that makes up this special event, so it is worth mentioning the photos only tease the senses.

The Art on Ice 2012 world tour includes shows in Switzerland, Sweden, Italy and China.  Tickets for this event are in high demand and already on sale for next-year’s event in 2013.