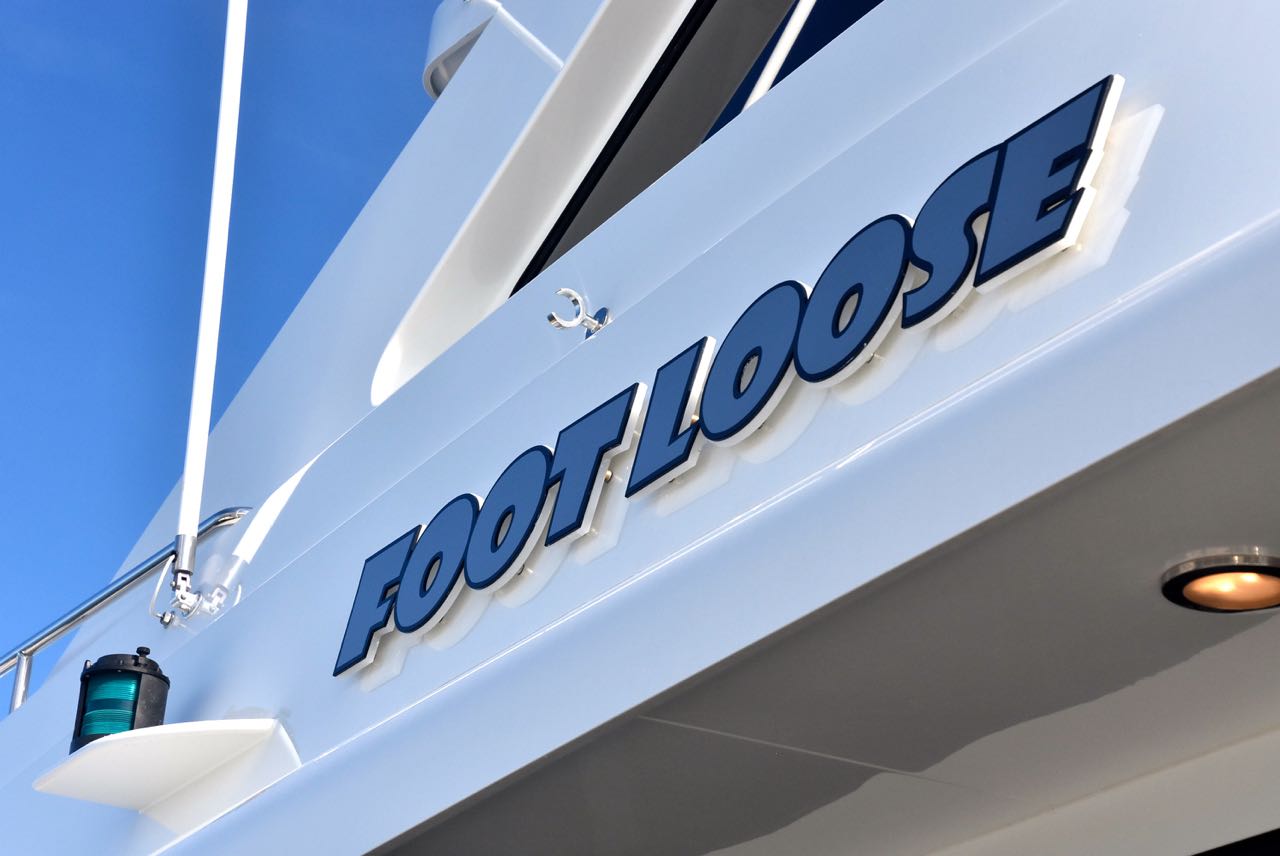 It was the Labor Day Weekend and I am usually afraid to head south to the shore because of the traffic. However at my wife’s urging that we could take the back roads and miss the traffic we decided to visit Atlantic Highlands. We hadn’t been there in quite some time and the weather was just right, not too hot or humid, a perfect day to be near the water and see all the boats docked there. 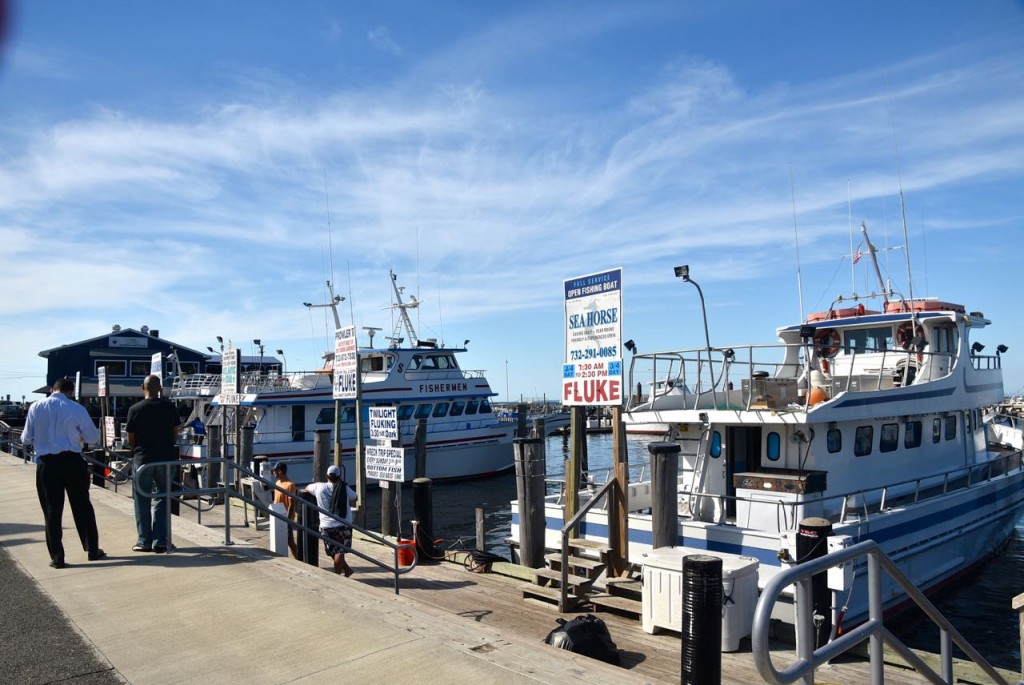 We arrived and began our walk and took note of all the fishing boats there. One was just coming back in to pick up two fisherman that must have run late. So many beautiful boats, not many large yachts, but hundreds of fishing and passenger boats spread across the docks. They must have rebuilt the waterfront and the docks after Hurricane Sandy, because everything looked new. The walkways to the boats were new and even the sidewalks looked new.

As we walked to the end of the hundreds of boats our eyes shifted to one yacht, the largest we saw at the end of the pier. The Footloose is a 95′ Yacht owned by Louis and Sharon Cyktor. We walked closer, took some photos and tried to peek into the portholes and tinted windows to get a better look.  As we started to walk back I noticed a man walking toward us and on his shirt it had a monogram Footloose.  I stopped him and asked him about the boat.  He explained he was Captain Kevin Nulty and they were up from Ft. Lauderdale, Florida with the owners.

I introduced myself and my wife and told him I publish the Hazlet News and my readers would love to see more of this beautiful boat and asked if there was a chance of us coming aboard. Kevin was gracious enough to take us on a tour of the yacht and we had an opportunity to meet his lovely wife Cassia. The yacht has a 3 person crew, he is the Captain, Cassia is the housekeeper and cook and a third crew member is responsible for maintenance of the yacht.

The photos and video will give you a good idea of our visit, so no need to detail it here. What I wanted to know is how much fuel does this monster vessel take. Well he explained that they just filled up and the cost was $10,000. I asked if you could get to Ft. Lauderdale from here on one tank full and he explained it cost $18,000 to make the one way trip. Folks, that is $36,000 in fuel costs alone to go round trip on this yacht.

We spent over an hour on board the yacht as I shot these photos and video clips and since we had our little dog Georgie with us, Cassia decided she wanted a dog just like Georgie and wouldn’t let him go. Georgie loves the attention and as you can see in the photos and video he sat quietly on her shoulder like a well-trained parrot.

I did some research on the owners and was truly impressed by what I had learned. The Nulty’s had told me many times how wonderful they were, kind, generous people, so I went on-line and found this.

Lou Cyktor, a World War II veteran, purchased Fords Corner Deli and Liquor Store after his service. Later, Lou became a real estate broker and started Wick Real Estate. He realized that building was another avenue he wished to pursue and founded Wick Companies. He created numerous housing developments, and then decided that collecting rental income would be his next step. He assembled numerous properties and put together The Cyktor Building, Tano Mall, Wick Shopping Plaza, Wick Corporate Center, and Baywick Shopping Plaza along with more housing projects. After over 60 years as founder and CEO of Wick Companies, Lou sold his company and with Sharon took over the ownership and operation of Fords Corner LLC. He has served as President of the Lions Club in Fords, NJ and as a former Chairman of the Woodbridge Planning Board.

Lou and Sharon have been married over 35 years and spend most of their time now in Fort Lauderdale, Florida. He is a generous and caring man, a humanitarian and one I want to learn more about.

Dinner Time At The Deck

After our time on Footloose we decided to go for a light dinner and headed for the Deck. Great place, lively music, large outdoor deck for its guests to stand at the bar and enjoy their summer drinks or order some of their delicious food.

We sat indoors with a perfect view of everything and I ordered the Blackened Chicken Sandwich with home-made Chips and Gladys ordered the Crab Cake Sandwich. Both were excellent and for those on a budget were a great choice. You will see our beautiful waitress Eileen Bauer serving me the chicken sandwich in our photos and video.

We Will Be Back

As we drove through AH, we noticed they do have some nice walking paths nearby and a drive through the town is interesting as you see how they have rebuilt after Sandy. All of the new homes you will see are built at least 8′ higher with a solid concrete base or are on stilts.

It was a great day in Atlantic Highlands and we promised ourselves we would return again in the near future.

If you want to get out of the house, don’t want to fight the traffic to Point Pleasant or Seaside, then visit Atlantic Highlands. There are no rides, the town is quite small, but if you just want to get some fresh air, take a leisurely stroll on the waterfront and have a nice meal, than you can’t go wrong visiting Atlantic Highlands.