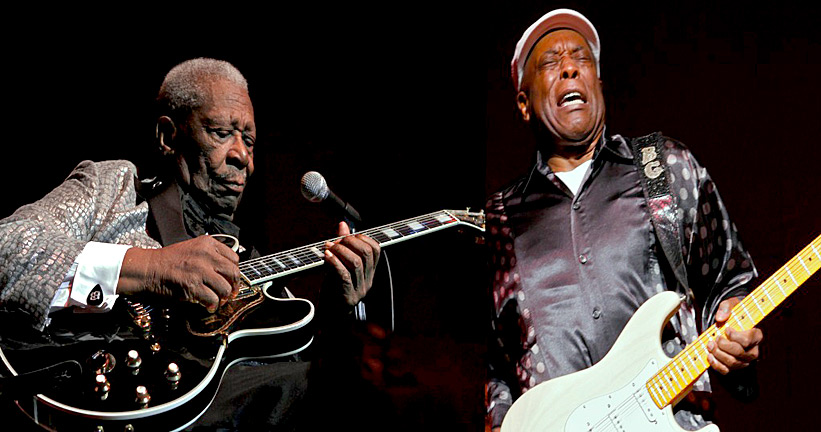 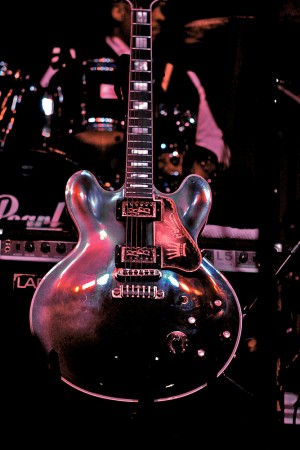 [dropcap]T[/dropcap]he blues.  Originated by African American musicians in the beginning of the 20th century it spawned Rock & Roll, grew into R&B and continues to influence all music genres as we know them today from country to jazz to rap and pop and even hip-hop.  Its roots are in almost every melody we hear from hit songs to jingles whether we notice it or not. Buddy Guy, 74, and B.B. King, 85, have been living the blues since learning the craft as youngsters from the music’s originators like Bukka White and Muddy Waters. Their careers each began around the early 1950s and they have never stopped bringing their music to people all over the world.  Each has achieved critical acclaim. Both are Grammy Award winners, Rock & Roll Hall of Fame inductees and members of Rolling Stones’ top 100 guitarists of all-time.

Thus, whenever living blues legends B.B. King or Buddy Guy plays a show it is a special event.  When their intense touring schedules are fortunate enough to allow them to play together on the same bill, it becomes a historic one.  What better place for such an opportunity than in our nation’s capital at the venue of the Daughters of the Revolution’s Constitution Hall?    Washington DC holds most of the country’s monuments to our nation’s history.  Since 1928 the DAR hall has hosted giants of the entertainment world from Segei Rachmaninoff to Billy Joel to Bill Cosby with every president since Calvin Coolidge making an attendance.  Tuesday night Aug 31st marked the latest historic show put on by Ed Atamian’s Elite shows at the great DAR.  It was a celebration of blues music featuring its two greatest names and masters of the blues guitar, Buddy Guy and B.B. King.

The historic feeling of the night and the venue was not lost on Buddy Guy who opened the show and didn’t take long to begin giving live lessons on how blues guitar is truly supposed to be played.  Covering Muddy Waters’ “She’s Nineteen Years Old,” Buddy slammed the notes so hard on his first solo, he broke a string.  It was no problem for the seasoned pro as he said, “That’s alright, I just won’t use that one.”  He played around it for most of the solo than in a move possibly never seen before, Guy removed the broken string and used it as a pick to whip the remaining guitar strings into sounds accentuating his left hand’s playing.  The crowd, so impressed, cheered with each sting of the string on his axe and he eventually handed it to one of the outreached hands in the audience. 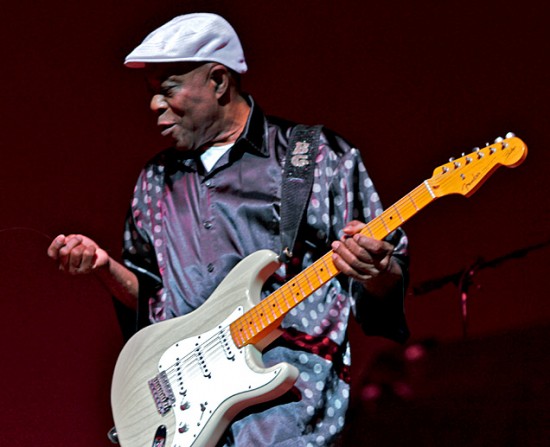 Throughout the show, Guy would display his talents on the instrument, easily playing the guitar while holding it backwards, upside down or with a drumstick and even a towel.  However, his lessons weren’t just in how he played but whom he was playing like.  Guy told the crowd,  “I want to take an opportunity tonight to show you a few things because I bet for some people this may be the first time you are hearing the blues.”   Guy told stories of the blues greatest guitarists from Muddy Waters to Eric Clapton, whom he personally played with each.  And with each story he covered a tune by each legend moving seamlessly in their styles: the pure blues of Muddy Water’s “Hoochie Coochie Man,” the delta beat from John Lee Hooker’s “Boom Boom” the psychedelic jam of Jimi Hendrix’s Voodoo Child and the Cream’s “Strange Brew,” the R&B groove of Bill Wither’s “Use Me” and more.

[quote]It seemed his goal was to show that the blues is in all forms of music and is the daddy to everything that has been born since: R&B, Rock & Roll, Pop, Hip-Hop etc.[/quote]

In a recent article with Artistdirect.com’s Rick Florino, Guy mentioned the always-sensitive nature of the Blues survival, “They don’t plblues on the radio no more! Hopefully, it (BB and his recent song collaboration) opens people’s eyes to let them know we’re still here playing it. We’re not babies. Maybe some young person will play the blues because of it. Hopefully, these radio stations will play a Muddy Waters or Howlin’ Wolf song once a month. Madonna or whoever doesn’t need the exposure like blues does because blues has been on the backburner ever since I remember. Nowadays, they only play what’s selling millions of records and they don’t really give blues a chance.”  Guy touched on that during the show and made the connection not just in music but also in his words regarding Hip-Hop and stating how racy lyrics go back to the days of Robert Johnson and that today’s rap/hip hop is a descendent of such blues. 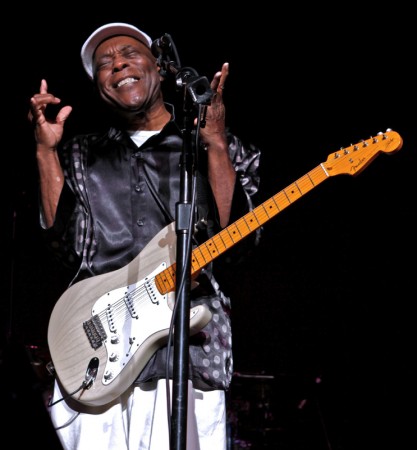 Guy’s history lesson never got old as his showmanship proved that his newest song, “74 Years Young” from his latest CD, “Living Proof” was spot on true.  Buddy sang, “Tonight I feel like I’m 21, cause I’m 74 years young!” Truly he is a man in his prime at any age. The sheer power of his guitar tones tore right into the audience soul and his showmanship kept their eyes locked.  While speaking about the style of Freddie King, he simply disappeared from the stage while soloing to reappear moments later in the audience then in the rafters and then back on stage again.  Like a ghost, the fleeting vision of Guy made the whole crowd stand up to try to find him and they never sat down again until he closed his set and walked off.  Buddy Guy lives his life’s mission by being himself.  He is “Living Proof” of the blues.

It seemed the DAR crowd was left drained after Guy’s set, wondering how even the great B.B. King could top what Guy had just done.  But after a brief intermission, that question was answered because Kings don’t have to do anything to show why they are Kings.  They just have to be.  And that’s all it took.  After his backing band warmed up the crowd with his intro music, B.B.  strolled onto the stage and got an immediate standing ovation.  His mere presence caused people to rush the front of the stage.  He couldn’t begin playing for almost 3 minutes due to the need of shaking hands and throwing picks to all the fans who reached out to him and flashed pictures for souvenir moments of the living legend they seemed couldn’t believe was in front of them. B.B.  finally took his seat, as at age 85 he doesn’t stand and play anymore, and encouraged the crowd to do the same.  His chair seemed like a throne for the King of the Blues and as he strapped on his famous guitar, Lucille.  It shone in black and gold, looking as intimidating and reminiscent of knight’s battle sword. 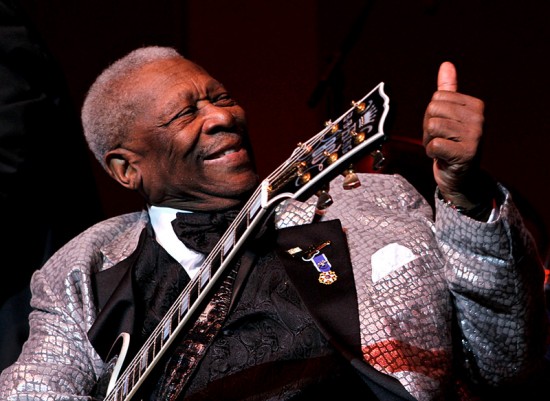 King cut into the crowd with his first lick, holding a sustained note in his famous vibrato style that seemed to last forever. Then the band went right into his one of his early and most popular hits, “Rock Me Baby.”  The audience was his.  B.B.’s band is more in the big band blues style than Guy’s raw blues/rock type band.  Guy’s, the Dam Right I Got the Blues band, is only a 5 piece of drums, rhythm guitar, bass and keys backing him to leave more room for his guitar soloing in his music.  However B.B.’s power comes from all around his ensemble of musicians: a four piece horn section, two rhythm guitars, bass and drums. 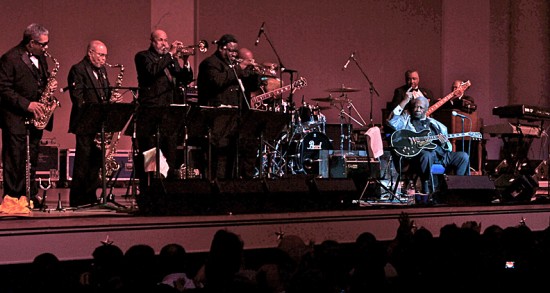 They are tight and even though the elder statesmen, King, sits during the show he never stops moving.  His every gesture is a signal to his veteran backing band to make the music move how he wants.  Also, like Guy, King sill has the voice of his prime.  He can hit notes high or low as needed and growl to make his point.  King is the bandleader, the master guitarist and the showman. 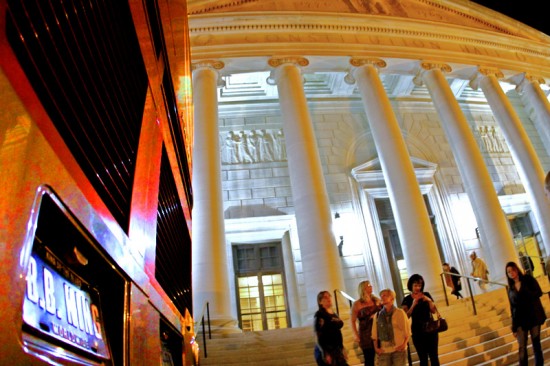 B.B. told stories and engaged the audience like they were all old friends and mentioned that his closest one, Buddy Guy, left him a note explaining he had to jet to his next gig and they would have to catch up at another time. While it was disappointing that Buddy and B.B. couldn’t jam together on this night, somehow it didn’t matter as B.B. was all the crowd needed for a great finale. His set is fun as B.B.’s songs move, jam and swing while also telling stories of loved and lost and humor.

The King enjoyed messing with the crowd and teasing them about who can dance and who can’t and more.    He ended the show with a 20 minute jam of his biggest hit, “The Thrill is Gone” and then so was he. Waving like the conquering King he is to his adoring followers and on to the next city to continue his life’s work of spreading the blues music.  History continues to be made each time a B.B. King or Buddy Guy plays a show because as stated earlier, these living legends are the blues living proof.