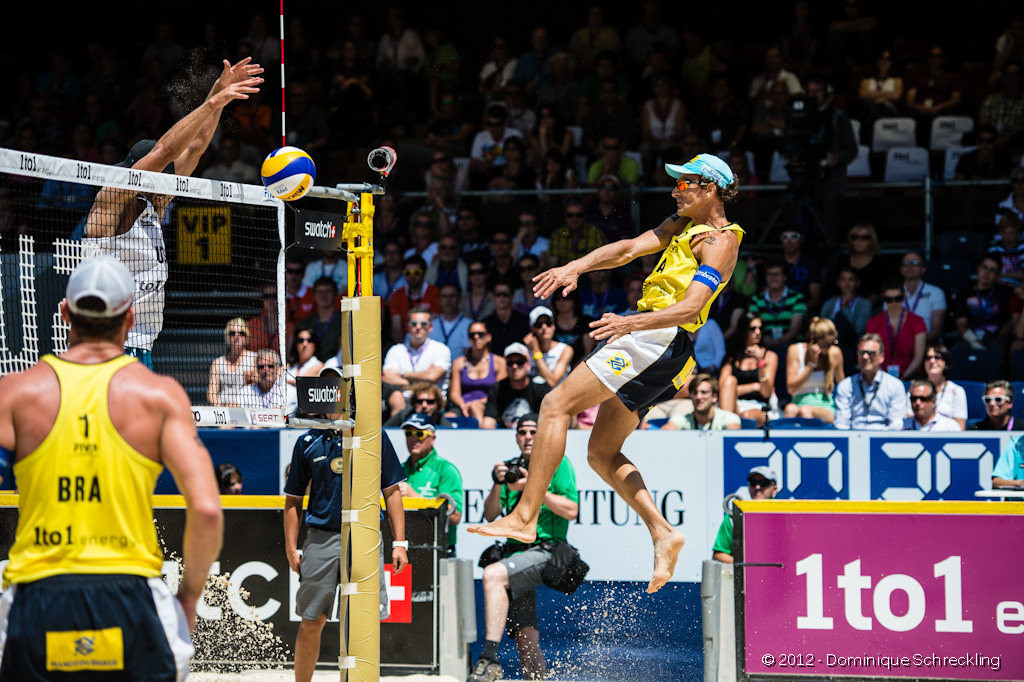 [dropcap]W[/dropcap]hen people think about Gstaad, the beautiful Alpine village in a magnificent valley in Southwestern Switzerland, beach volleyball hardly springs to mind. Gstaad is a destination much better known for winter sports and Alpine beauty.

Years ago, Gstaad was thinking about how the infrastructure of the Tennis Open which was growing each year could also be used for an additional summer event. The idea of beach volleyball came up. Is there a sport event which could contrast more with the Gstaad famous as a winter destination than one that is usually played on a beach? The FIVB (Fédération Internationale de Volleyball) liked the idea of having a competition of the Beach Volleyball World Tour in the Swiss Alps. At 3440ft (1050m) above sea-level, this is the highest altitude where the FIVB World Tour now holds matches annually. With 13 editions having already been held here, Gstaad has evolved into one of the major Grand Slam tournaments of the FIVB World Tour.

The 2012 edition which took place just very few weeks ahead of the Olympic Games in London, was a unique opportunity for the public to watch beach volleyball of the highest level in the fully sold out 6000-seat stadium. The top teams of the FIVB taking one of the last competitions to measure themselves before the Games showed a fast, precise, intense and breathtaking play.

This edition was not short on surprises in the women’s competition. In a rain-soaked quarter final the Swiss team of Simone Kuhn – Nadine Zumkehr defeated the Brazilian team of Agatha Bednarczuk – Barbara Seixas 19-21, 21-19 and 15-12 in 58 minutes. This marked the first time in the 13-year history of this event in Gstaad that Brazil did not have at least one team in the final four teams competing for a place on the podium. In the semifinals against the double Olympic winners of 2008 Misty May-Treanor – Kerri Walsh from the USA, the Swiss team had no chance, losing 21-13 and 21-14.

The women’s podium was fairly unusual:

The 34-year-old Californian Misty May-Treanor announced after the final that she will retire from competition after the Olympic Games: “I will only come back to be in the crowd up there, to cheer for Kerri”. According to the US players who were asked during the press conference after the game about the unusual podium declared that a few years ago it was usual to have Brazil and the US in the finals of a beach volleyball championship. However, now other countries have started to develop their own programs for beach volleyball the results are now starting to show.

The men’s competition showed powerful gameplay but kept little surprises about the outcome with Brazil and the US in the final. For the 5th time in row in the final of the FIVB competition, Jake Gibb – Sean Rosenthal (USA) affronted Alison Ceruti – Emanuel Rego (BRA). These previous encounters were 3 times in favor of Brazil. Here in Gstaad, the encounter ended 21:17, 21:17 in favor of the USA.

The full stadium gave a standing ovation to the Swiss Sascha Heyer who played here in 12 out of 13 competitions and who retires from the competition at the end of the season.

Like the previous year, I would like to thank once again the organizing team and its 500 volunteers for the outstanding work to make this happen.

Photography wise, I used the Nikon D4 mostly together with the Sigma 120-300 – 2.8 EX DG OS HSM which featured not only a pretty good bokeh to allow to make the player stand out of the background, but the autofocus showed also fast enough to follow the fast and pretty much unpredictable game play, especially on this level.

See you next year; the 2013 edition is scheduled from July 9th to 14th just after the world championship in Stare Jablonki, Poland (July 1st to 7th).

These and more photos are under www.pbase.com/tcom/chbeachvollegstaad2012.