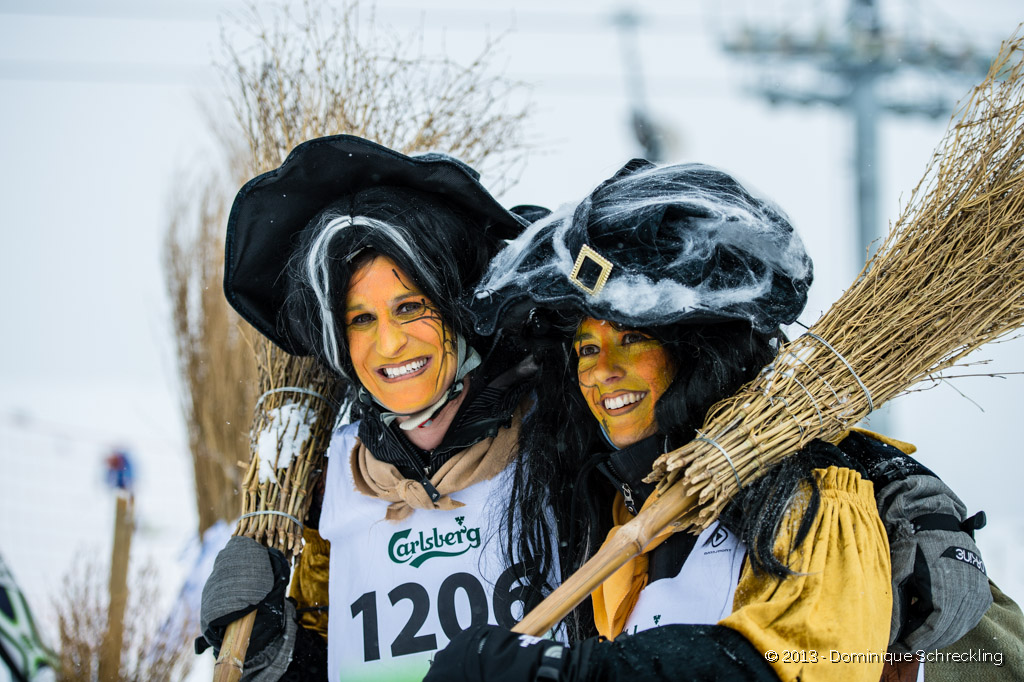 [dropcap]B[/dropcap]elalp is a little village located above Brig in the Swiss canton of Valais. It is the ideal starting point for winter sports with over 60km (37 miles) of slopes as well as trails for winter hikes and cross-country skiing. In the summer, it offers a wide range of hikes or alpine tours in the Jungfrau-Aletsch UNESCO World Heritage Site. It is a paradise for photographers, especially during the Belalp Hexe Ski Race.

In 1983, the Ski Club of Belalp created the Belalp Hexe (Belalp Witch) ski racing event paying homage to the legend of a witch of the region who murdered her husband and was burned at the stake. The idea was to create a popular race during the calm period in January between Christmas and the Swiss school holiday week which is spread over February depending of the region.

The largest and most traditional of the races, the Witches’ Descent, is accessible to all wishing to compete on a challenging race course with 12km (7.5 miles) in length and an altitude difference of 1800m (5900 ft). There are some flat sections, but good skiers can reach 140km/h (86 mph).

Back in 1983, it started with just 300 competitors. Today, the event requires 300 volunteers, helpers and rescuers to welcome over 1500 competitors from all over Europe.

The gathering point for those coming with public transports is to take the train to Brig. Those unaware of the competition can be surprised at the train station seeing quite a few sorcerers and witches like they would be coming out of a Harry Potter book. The trip continues aboard a coach bringing competitors and spectators to Blatten, the bottom station of the cable car to Belalp.

The day started with a beautiful sunny morning offering a perfect view on the distant Matterhorn. The “normal” ski competition takes place in the morning. Every 12 seconds one of the over 600 racers starts on the demanding course. As in every similar competition, only the time is taken into account for the ranking. This race finished just before lunch time. The best participants needed a bit more than 12 minutes to reach the finish line.

In terms of photography, in the morning the more serious races were challenging to capture due to the speed of the racers. Unless one is able to follow the whole track, the topic is quickly covered by a photographer. I was located just between the slope and the chair lift which brought up the colorful competitors for the afternoon, that is to say, the witches! A chair lift full of sorcerers and witches in costumes with brooms certainly allows some unusual photos and great fun for all.

The wildest competition in the Alps without any doubt, starts at lunch time: the Witches’ descent with over 900 participants. It is the pilgrimage of the witches on their brooms skiing from the top of Belalp to the finish line in Blatten. Time is no longer an important factor in the race. In fact, the majority of these witches need several hours to finish the race. Apparently not even all of the witches reach the finish line. It is said that some just evaporate or fly away to the white, snow covered mountains of Belalp. The entertainment value of the Belalp Hexe is the winning factor of the day. The witches make quite a few stops along the slope to entertain the other participants and the public. A jury which is situated along the track evaluates the originality of the chosen topic of the witches, their costumes, their makeup, the entertainment quality of their performances as well as their skills on skis. Quite a few witches don’t even reach the finish line before the time limit of the competition, 3:30pm.

This part is definitely the better time for photographers with the colorful costumes of the witches who are not shy to be in front of a camera. The weather conditions deteriorated quickly in the afternoon. The cloud cover got thicker and soon it started to snow reducing visibility, contrast and color rendition.

The Belalp Hexe is a highly entertaining event for everyone combined to a sport event. It is perfectly well organized and I am hoping to cover it again next year, but with a longer lens to better catch the action, snowshoes to make it easier to move along the track and hopefully sunny weather in the afternoon.

See you there next year for the witches ski race on January, 18th 2014.