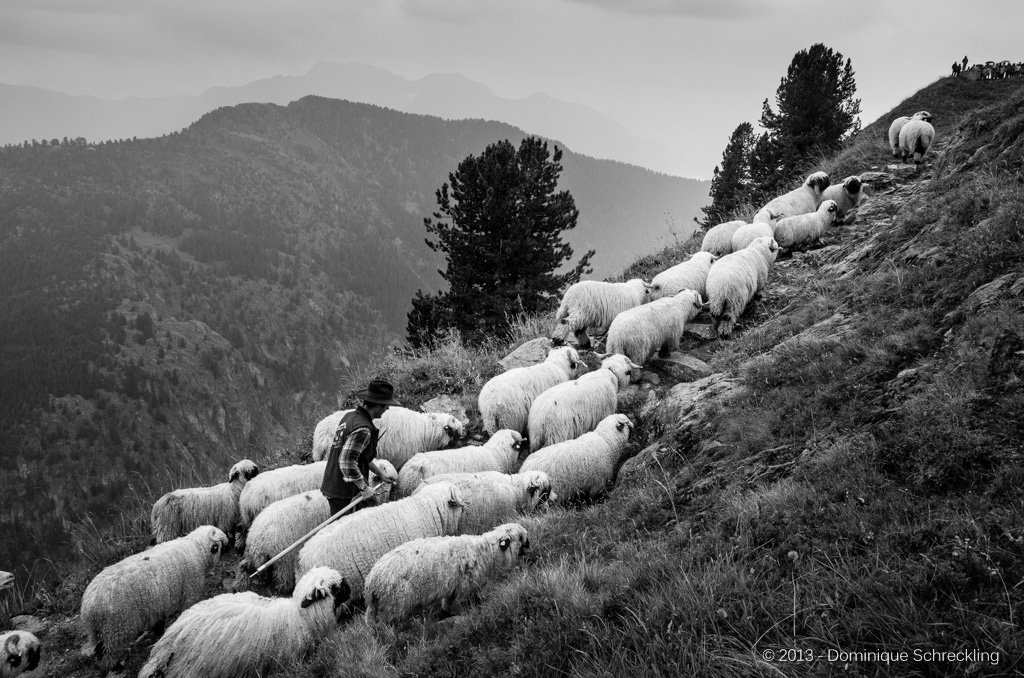 [dropcap]T[/dropcap]he tiny mountain village of Belalp, a little known jewel set above the city of Brig in the Canton of Valais, Switzerland may fall in the shadow of more famous places like Riederalp, Saas Fee or Zermatt but it has quite a few sparkling gems to please visitors and locals alike. One of them is the annual sheep and shepherds’ descent and festival called the Schäferwochenende, which literally means the “Shepherds’ weekend”. On the last weekend of August, it hosts this old traditional event to which the locals are very attached. It is the celebration of the home coming of the sheep.

Over many generations at the beginning of summertime the sheep of the region from different farms are brought to one of the wildest regions of Switzerland, the Innere Aletschji. It is a mountain ridge surrounded by glaciers and deep ravines. Not even wolves have discovered this remote peninsula yet which is trapped within a sea of ice including the UNESCO World Heritage Site of the Aletsch glacier. Usually over 1’000 head of sheep spend their summer grazing in the steep pastures located between 2’000m (6’562ft) and 3’000m (9’842ft) above sea level. The flock of sheep is mainly composed of the typical local breed of the region, the Valais Blacknose.

At the end of the summer, eleven young trained shepherds fly into this rugged region by helicopter. Their task is to find all of the animals, to bring them back to Belalp and to deliver them to their respective owners. They have three days to accomplish this at the risk of their own lives climbing in this steep rocky and dangerous region looking for strays and separated flocks of sheep. The group of young men is composed of their leader, called the Säckelmeister and his assistants, the Sanner.

The weather is one of the key factors for their success. A clear view makes it much easier than trying to find the sheep on such a large area in misty weather. The men are in constant radio communication with each other as those below on the slopes are not necessarily able to see the sheep located above them in the clouds. White sheep can be difficult to see in glacial moraine and rocky areas. When the temperatures are higher, the sheep also tend to spend their time hidden in the shade of the rocks. Individual sheep are the most complicated to herd in the right direction. In a panic they could even jump over the high cliffs. As the numbers in the gathering of the flock grows, the shepherds bring them close to an Alpine hut where they spend the night. Rivulets need to be crossed and injured animals, such as with broken legs, need to be taken care of.

There is definitely no abundance of visible joy coming from the young men as it is a highly exhausting task to find the animals and herd them back up the steep trails to Belalp. Sheep dogs are not used in this task because these sheep are not used to dogs and the steep area would make it too dangerous for both dogs and sheep.

The first day, the shepherds concentrate on getting the easier-to-find sheep grouped together which are those found on the more gradual slopes and fields. They hope to get at least half of the animals that first day.

The entire second day is dedicated to getting the animals out of the steep slopes. Some sheep have reached dead ends and can’t find their way back to the flock. The Säckelmeister equipped with binoculars is guiding the assistants through steep rugged slopes to reach individual sheep. The men have to evaluate the amount of risk they want to take for themselves within the rock walls to get the animals back. Some animals do not survive the summer; either because of injuries or diseases.

In the very early morning of the third day, a Saturday, the men leave the Alpine hut and take the long hike with the entire flock towards Belalp. The path takes them through an almost completely vertical footpath down a deep ravine of the Oberaletsch-Glacier. The long hike takes around eight hours and needs quite a few breaks; not only for the shepherds themselves, but also for the sheep. Just before reaching Belalp, the parade of sheep and shepherds takes a switchback vertical path upwards which is built with dry stone walls directly into the mountain.

The public events organized by the Blatten-Belalp Tourist office starts on Saturday by midday accompanied with Swiss traditional music, kiosks with food and drinks along the traversal mountain path of the village. The shepherds’ weekend marks not only the return of the sheep from their summer location back to their owners; it is also a symbol in the region for the end of the summer. Visitors from nearby and as well as from far away come to Belalp and gather together in front of a lovely little church on a plateau with a spectacular frontal view over the Aletsch Glacier below. This plateau is where the sheep will be coming up the last part of the steep trail in the afternoon along with the exhausted but visibly relieved young men of the accomplished task of gathering up all the sheep in this Alpine region. The question on everyone’s minds, especially on those of the owners, is if all the animals that set out a few months earlier will return or if some have taken their toll by Mother Nature.

This year the weather turned for the worse at the end making the return more difficult. Seven weeks of superb Alpine summer weather came to an end with heavy rain starting just five minutes before the first sheep showed up on the plateau of Belalp village.

It was amazing to observe the coming home of all these sheep of different ages and gender. Due to the rainy weather, some sheep seem to be disturbed by the colorful umbrellas of the spectators and either froze, or turned around and headed back down the trail only to meet head to head with the other sheep coming up the trail. It was sheep gridlock for awhile but the shepherds managed to get them all in the right direction and back on track.

Once at Belalp, the sheep are brought to a large corral built with walls of dry stones, called Färricha, where they stay for the night. It is a kind of sorting facility, a main corral surrounded by many smaller pens to separate the sheep by owners.

On Sunday morning, the rain was replaced with a thick fog. The owners, helpers and spectators came to the Färricha for the separating of the flock by owners into the stone pens. Very lively with little cooperation from the sheep, it is a kind of sheep rodeo. At the beginning in the crowded corral the task is rather easy since the animals have little space to run around. However, it is a different story for the last remaining ones since they have a lot of space in which to escape the immediate capture by their owners.

Once the whole flock is separated, the initial question of the farmers regarding how many sheep made it back home safely can finally be answered. This year’s edition was not so positive. Out of the 876 sheep that set out in the beginning of the summer, 19 were missing. These were mostly sheep of one single owner who lost almost all his entire flock. Unless there are too serious of injuries or diseases, there is no reason to leave them behind. The young shepherds will return to the remote rugged region in the upcoming days and search for the missing ones.

The closest train station to Belalp is Brig. From there you can take one of the famous Swiss Postal buses up the steep curvy road while the bus blows it’s well recognized horn going around corners. The end of the road is the little picturesque village of Blatten with ancient traditional sun burnt wooden chalets and a tiny white village church in the center. You can visit the Blatten-Belalp Tourist Office after getting off the bus or parking your car as they have a wealth of information and maps. Blatten is the base for a great variety of alpine outdoor activities. It is also the base of the cable car going up to the small Alpine car-free village of Belalp. A second cable car is being constructed from Blatten to reach the highest parts of the slopes of Belalp.

I would like to thank Belalp Tourism for the wonderful support they gave in organizing and helping me cover this frolicking and lively most memorable event. In addition gratitude is due to the friendly and attentive staff of the Hamilton Lodge, a truly authentic Alpine lodge that made the stay even more enjoyable.