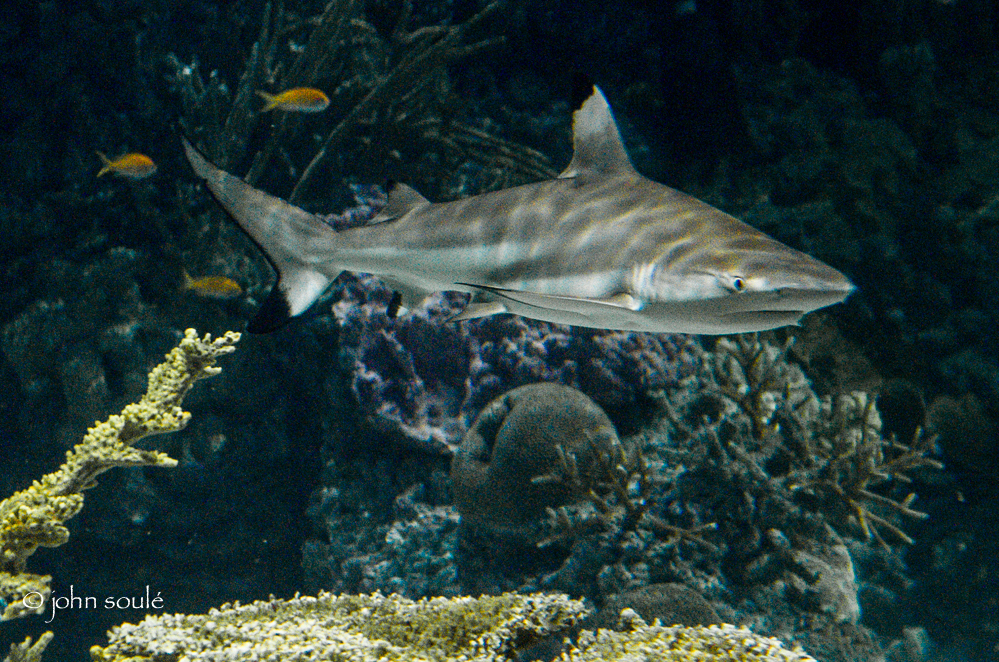 The National Aquarium, a popular tourist attraction for over 3 decades, draws 1.4 million visitors annually. At a cost of over $12.5, the new “Blacktip Reef” exhibit, a replica of part of Australia’s Great Barrier Reef, is now latest showcase attraction.

In addition to seeing the exhibit from all levels of the Aquarium, visitors can experience a dive into the reef without getting wet as they peer through a specially designed 27-foot panoramic viewing window.  It’s a must-see educational experience and, for many, the closest they will get to seeing a coral reef up close and personal. 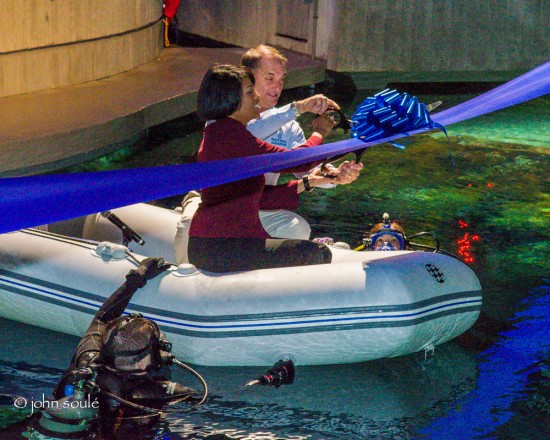 On hand for the official ribbon cutting ceremony were hundreds of guests, aquarium staff, Baltimore community leaders, and both Baltimore’s Mayor Rawlings-Blake and the National Aquarium’s CEO, John Racanelli.  It was quite fitting that the ceremony was held during “Shark Week” which also coincided with the aquarium’s 32nd birthday.

The Mayor and CEO were taken by an inflatable raft, guided by two scuba divers, to an area directly above the reef.  As they floated past I could not help but think: sharp scissors… inflatable raft …  shark infested waters … hmmmm.

“It warms my heart. I’m excited to be here,” said the Mayor.  “Blacktip Reef is really one of the first major enhancements to the aquarium in a number of years. And it just felt right to do it on our birthday, our 32nd anniversary,” said the CEO. 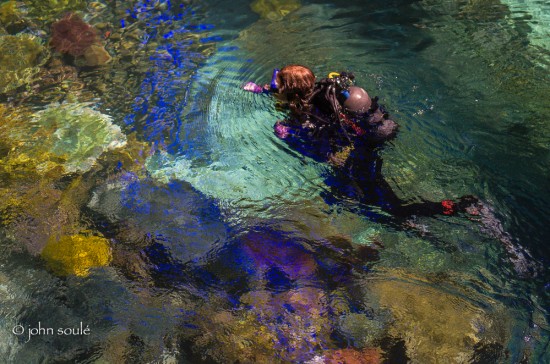 The exhibit didn’t happen overnight and took many years of planning.  To bring this exciting exhibit and revitalize the National Aquarium, the aging infrastructure had to be updated.  The old exhibit, “Wings in the Water”, had to be closed during the summer of 2012 to prepare for the year-long renovation.

The design called for reinforcement of the existing infrastructure and the repair of a leak in aging concrete tank.  It also meant the creation of a coral reef area that could be viewed from all 5 levels of the aquarium.  Below ground level, the viewing area was to be nearly 20 feet wide and feature four new clear acrylic windows (4 inches thick) that could offer face-to-face encounters with the marine life.

CEO John Racanelli said in a statement. “This is the first in an ambitious series of innovations here at the National Aquarium, all of which underscore our commitment to inspire conservation of the world’s aquatic treasures.” 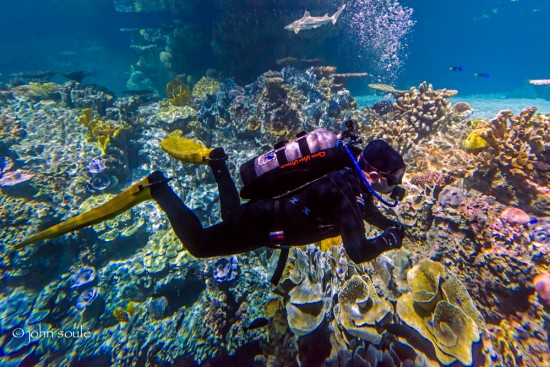 The coral is what would make the difference in this exhibit.  The area that once consisted of a sparse, sandy bottom would now filled with beautiful, colorful coral.

The reef was to be made from synthetic materials which were to be hand-crafted and painted to be an exact replica of the real coral reefs found in the Indo-Pacific.

The specially designed coral would also need to be designed to be hollow and hide aquarium piping. Finally, the coral had to be very realistic, but unlike actual live coral, the synthetic coral had to be flexible and not as vulnerable to breakage.   Over 3000-pieces of coral had to be constructed to replicate 50 different coral species.  The effort would take 18 months.

[box_dark]The Blacktip Reef exhibit features one of the most comprehensive recreations of an Indo-Pacific coral reef anywhere in the United States.[/box_dark]

“A coral reef like this would take hundreds of years to develop in nature, and it has likewise been a major undertaking to create an Indo-Pacific reef for these blacktip reef sharks to call home,” said CEO Racanelli.

“The result tells the same story here in the aquarium as it does in nature – that coral reefs are stunningly beautiful but incredibly fragile ecosystems that need our care.” Corel reefs “are really like cites under the ocean” said curator Jack Cover.  “They cover one percent of the Earth’s surface, but at least half the fish in the ocean will be found in them. 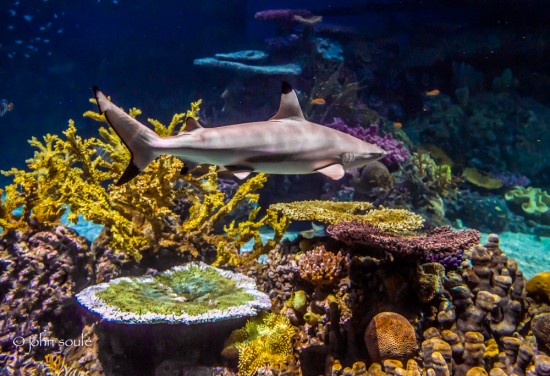 The stars of the exhibit is of course the school of 20 fast moving blacktip reef sharks, best known for the prominent black tips on their fins. The 2-year-old, 2-foot long sharks were captured in the wild in Australia under a government-monitored program and brought to the United States.

They can grow to six feet and have been known to live from 25-30 years.  They were transported to Baltimore and held at the aquarium’s animal care center for the last year and half.  “This is a really gorgeous species of shark,” said Jack Cover, the aquarium’s general curator. “We’re trying to get people away from the myths and assumptions of the movie Jaws.” 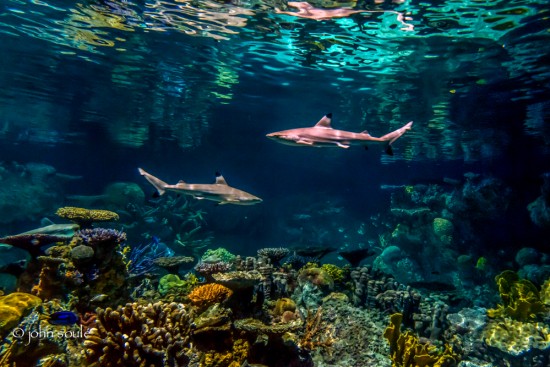 The sharks had to become acclimated to life in their new home. Over time, trainers worked to get them to accept the presence of divers and flashing lights (all those visitors with their cameras).

Ashleigh Clews, along with other aquarium staff, were challenged with the task of training the young shark to seek out only bony fish and squid. “They can be trained like a dog” stated Clews.  “They are very intelligent”.  Food was provided at feeding stations within the exhibit (as opposed to having to hunt for prey) to help control their appetite for the taste of their neighbors.  Although predators in the wild, these captive sharks have now gotten used to being fed chopped-up fish and squid, Cover said.

Most of the fish in the new exhibit would normally qualify as menu items for these shark but none seemed panicked by their presence and remained in schools as they swam peacefully around their new home.

Cover said the sharks may not totally abandon their wild ways and just might be tempted to go after one of their tank mates occasionally.   But not to worry, Cover said.  “The fish are going to do what they do in the wild.  They’ll hide.”
[box_light]The Big Move[/box_light] 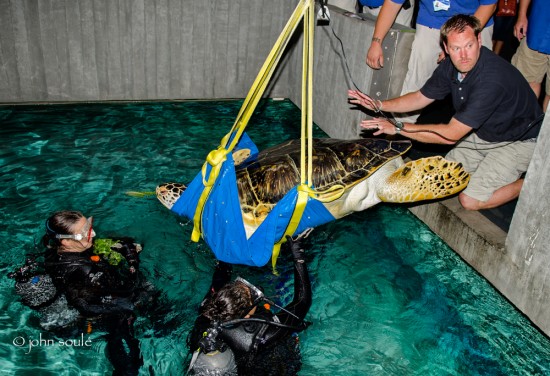 To prepare for the new construction, all marine life was removed from the existing tank.  This was no easy task, since the inhabits included a mixture of fish, a few shark, 20-30 rays, and a 500+ pound sea turtle – all of which had to be removed and relocated.  (See the related Article on IMPress here.) 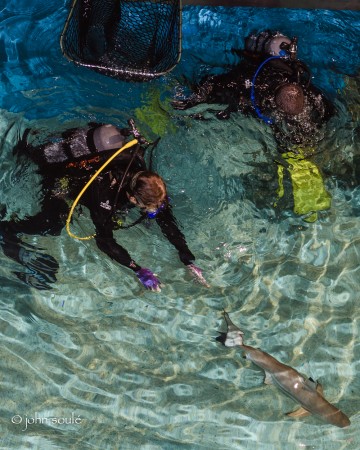 Through the careful efforts of the National Aquarium’s Biological Programs team some of the marine life was transported to other aquariums while some remained locally to be brought back to the new exhibit.

After the construction was completed, it took several weeks to gradually introduce the new population for the exhibit.  First it was adding the over 60 different types of fish and then the huge sea turtle. Then, after several weeks had gone by, it was time for the addition of the sharks.

The young sharks were introduced by a team of divers using a net one at a time.  Once the divers felt a newly introduced shark had adjusted to its new surroundings, the next shark was added. One by one – this process alone took two days.  After the last shark was introduced, spectators and aquarium staff alike applauded and shouted in both excitement and relief. 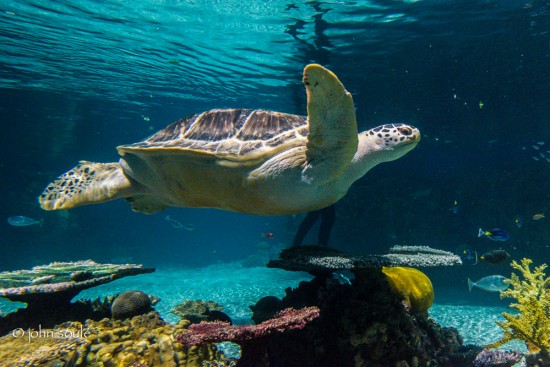 Calypso, the aquarium’s resident sea turtle for some 12 years, was one of the first new residents to be re-introduced and adapted quickly to her new environment.

Calypso, the gentle giant rescue turtle, has become a crowd favorite over the years. 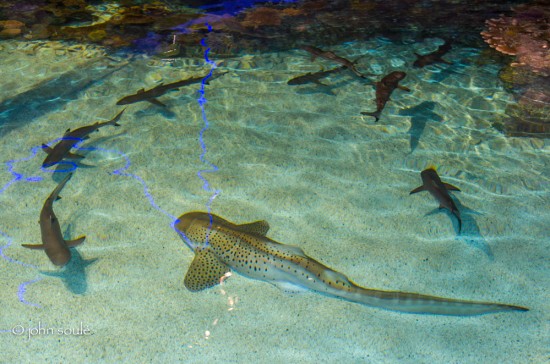 Two zebra sharks, Zeke and Zoe were introduced to the new exhibit only a day before the ribbon cutting. Curious reef sharks could be seen circling Zoe as she rested after a feeding. 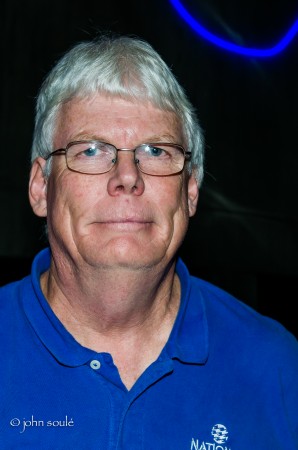 The new exhibit is truly spectacular – “You’re sort of transferred into their world,” Jack Cover, the aquarium’s general curator, said. “You’re seeing it from their viewpoint.”

The new exhibit is really an experience, with visitors able to use educational technology to identify each organism inside the 260,000 gallon tank. Viewers can see demonstrations (thanks to the new diving platform) as well as feedings.  The diving platform is a new feature that will be used for demonstrations.

Cover, who has been overseeing the new exhibit since construction began late last summer, says the idea was to replicate a section of the Great Barrier Reef, one of the richest natural habitats, as closely as possible. “We’re very proud of the fact that it’s an authentic re-creation,” he said. “The fish, the species of coral — everything.” 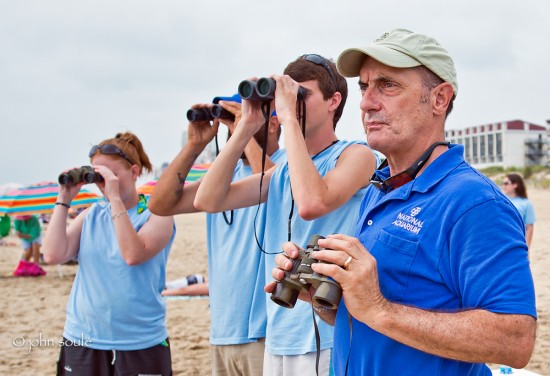 CEO Racanelli said the new exhibit is the first of several new components planned for the aquarium; the next, he said, should be ready in early 2015.

Although officials are still working on specifics, he said, it will focus on aquatic life in the Maryland region — that is, in the Chesapeake Bay and its watershed or on the Atlantic shores.

CEO Racanelli can often be seen with Aquarium staff looking out for ways to protect marine life and educate the public. 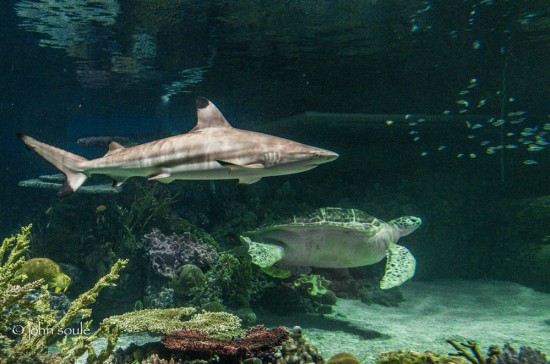 I highly recommend adding a visit to see the Blacktip Reef at the National Aquarium in Baltimore.  In the meantime, a live web cam has been installed for your viewing pleasure.  (Turn on your sound and go to full screen if you have a high-speed connection for an enjoyable dive into the coral reef.)