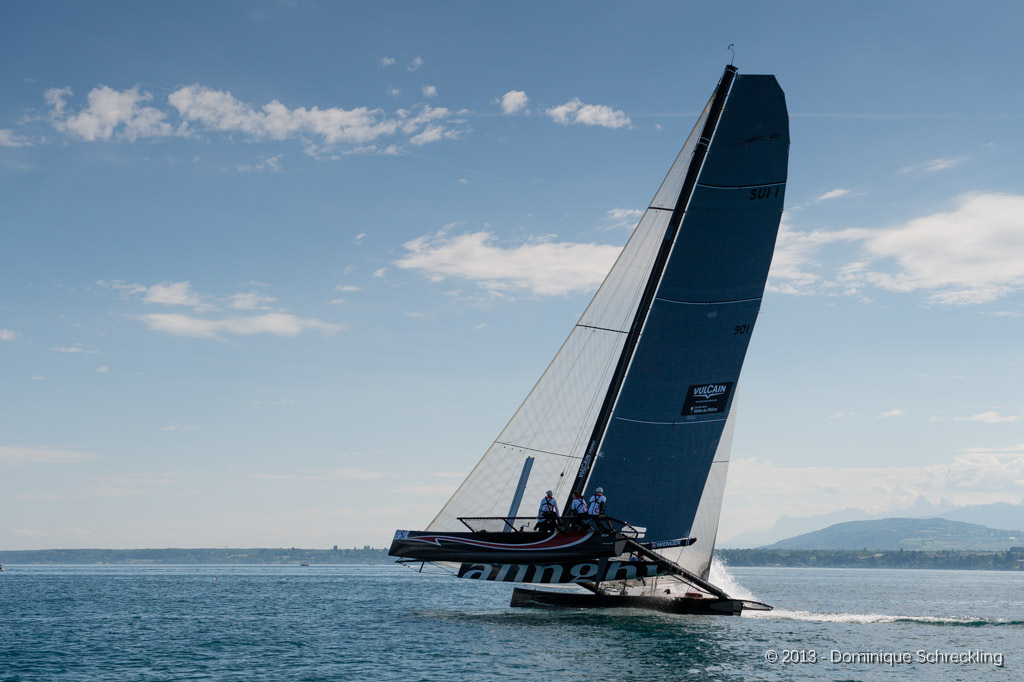 [dropcap]T[/dropcap]his year The Bol d’Or Regatta turned 75 years old. What began as a small regatta on Lake Geneva, Switzerland with just 26 boats, has become today the most important inland regatta in the world. The Bol d’Or (which literally means gold cup or bowl) is certainly among the most spectacular events on this lake.

It all started back in 1939. Mr. Pierre Bonnet, the chairman of the Geneva Yacht Club, was bored with circling three markers during the long-distance regattas called “Les douze heures” (The 12 hours). He had the idea of creating a course using the entire surface of the lake from Geneva to the other end at Le Bouveret and back. On July 22nd, 26 boats lined up for the start of the very first Bol d’Or. The race was considered as dangerous since it meant spending the night out which was not common back then. All 26 boats finished the first edition, the victory going to Fred Firmenich’s 6 meter boat Ylliam IV in 23 hours and 8 minutes.

The race has taken place every year from 1939. During the Second World War, it was prohibited to approach the French coasts so the course was modified with the last marker anchored off Montreux.

Today, the event is called the Bol d’Or Mirabaud, named after the international financial group which became the main sponsor in 2005. During these 75 years, it has turned into a true nautical festival and one of the grand classics on the international racing calendar. Each year sailing champions from across Europe meet at the starting line in Geneva and race across 76 miles to Le Bouveret and back. Apart from these champions on board sailing boats with cutting edge technology, there are also groups of friends taking part on board regular boats and even families with their children.

Over the years, the race also presented advances in sailing technologies. The monohulls dominated the race until 1980. Then, with the advent of the two or three hulls, the multihulls began to revolutionize sailing on Lake Geneva. From 1980 to 2003, the lake turned into a laboratory for boat designers to improve reliability, weight and speed with the help of new materials in order to push the limits. The boats became more competitive each year until the beginning of the new century when Ernesto Bertarelli’s “Black” multihull dominated and won the race four times in a row. He helped to develop a fast multihull adapted to the conditions of the lake. The aim of the boat designer was to offer a standardized design in order to focus on the sport and the tactical aspects of a regatta rather than a race to technological advances. The result was the multihull boat model Décision 35 (short D35). In 2004, eight multihull owners decided to compete with the same equipment. From 2004 to 2012, the D35 won every edition of the Bol d’Or Mirabaud with sailors like Loïck Peyron, Russell Coutts, Franck Cammas, Michel Desjoyeaux or Ernesto Bertarelli.

Around 3’000 participants on 500 boats prepared for the race on Saturday morning of June 15th 2013. Observing the preparations was an interesting moment. It was clearly visible who was boarding with just the minimal equipment and food to keep the weight as low as possible to better compete in the race while others embarked fully loaded with the idea of spending two full days on the lake.

It was a bright sunny morning with very little wind. There was one thing that was clear. The race record of just 5 hours and 1 minute which was established in 1994 would remain at least one year longer. On Saturday afternoon, the upper part of the lake turned into a storm with gusts close to 40 knots and heavy rain, but for just 15 minutes. The fastest boats were not caught in the storm since they left the area in time. Then it was a long wait in the night for those with the slower boats who did not manage to return to Geneva before midnight and most of the day on Sunday had almost no wind at all. Out of the 500 boats on the start on Saturday morning, 336 managed to return to Geneva before the deadline of the competition set to Sunday 5pm.

The Alinghi, the D35 boat of Ernesto Bertarelli made a good start. Zenith Fresh with skipper Jean-Philippe Bucher used the new Ventilo catamaran which is of the same size as the D35, 35 feet long, but which weights 400kg (880 pounds) less. In the very light wind conditions of the day, the lighter weight advantage of the Ventilo catamaran was the decisive feature of this regatta. It allowed accelerating faster than the heavier D35 and Zenith Fresh overtook Alinghi. She was leading at the turning point and kept the lead until crossing the finish line in Geneva. The time of Zenith Fresh was 12 hours and 28 minutes with a comfortable advance of almost 2 hours over the followers. It was the first time since 2004 that the D35 did not win the competition.