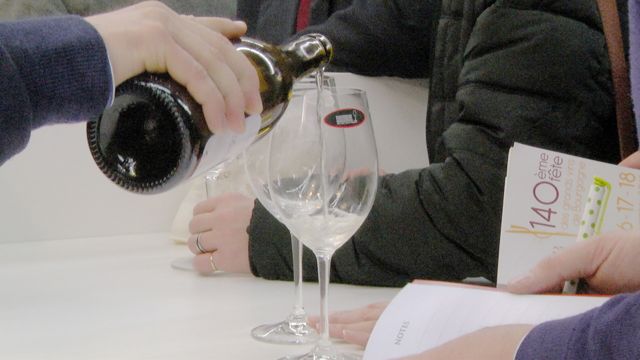 This “not to be missed” video gives wine lovers, food and travel buffs an intimate peek into the people and happenings during the oldest  and most traditional  of the Burgundy wine celebrations, “Les Trois Glorieuses.”  The festivities include several sensational wining and dining events connected with the annual wine auction.

Wine guru Robert Parker commented that Les Trois Glorieuses is “the greatest eating and drinking experience on the face of this planet!”

“There is something about this place, in the world of wine, that is unique.  It brings out the passion in people. For the wine lovers of the universe, there’s something magnetic about Burgundy that brings you here.“

See and feel what it’s like being at the exclusive gathering of the Grumage de Santenay. You will meet Nicolas and Béatrice Ryhiner, the owners of the beautiful Chateau de la Crée and join them and many local winemakers and their guests at Chateau de Santenay for the annual Grumage.

Meursault has the reputation of being the “capital of great Burgundy wines.” Join Meursault  winemakers, vineyard workers and their exclusive guests in celebrating the end of the harvest with the Paulée de Meursault. Join in the fun by viewing this “Felliniesque” rendition of the event.

Not many visitors to Burgundy are fortunate enough to experience the Burgundy hospitality at its best.  Traditional Burgundian hospitality was demonstrated to us in a delightful and surprising way at the end of the Paulée de Meursault event. Being totally exhausted after 6 hours of videoing people eating drinking and generally enjoying themselves and each other, my production associate wife and I had decided to stop shooting.   At that very moment, the husband of one of our press contacts in Beaune said that we just had to meet a special local winemaker.  His name is Vincent Bouzereau.

After a brief introduction and conversation, Vincent invited us to join him and some others for some additional wine tasting.  I explained to Vincent that due to our extensive videoing schedule, we had failed to eat anything since breakfast and needed to refuse his offer.  “Come to my home and I will feed you” was his answer.

And that’s exactly what happened.  We found ourselves sitting in his lovely French country kitchen, with Vincent pulling a delicious terrine, which his wife Aline had just freshly made, out of the refrigerator, along with fresh bread and other delights. “This Bourgogne Aligoté will go well with what you’re going to be eating,” he said, showing us a half empty bottle with no label on it.  And the wine delivered what was promised. Needless to say, this was such a pleasant surprise and the memories will live with us always.

Later we joined other guests and tasted what turned out to be one of the most exciting Burgundy wines I have ever had the pleasure of drinking.  It was another one of Vincent’s wines, a 2003 Meursault Narvaux, served by his young son from another unlabeled magnum bottle.  What a delight! It’s been said that the difference between a good wine and a great wine is when you ask yourself the question, “how can it smell and taste like this.”  Our thanks to Vincent and his family for showing us such an excellent example of true Burgundian hospitality.

With so much of an emphasis and hype these days relating to American and new world wines, I thought it would be good to go back and visit the old world roots of classic winemaking. And where’s a better place to start than the heart of French winemaking, Burgundy.

First indications of winemaking in Burgundy date back as far as A.D. 312. Modern Burgundy is considered to be the gastronomic heart of France, famous for its diverse offerings of exquisite wines and its local culinary pleasures. Through the years, Burgundy has gathered an almost religious following, among its aficionados, for its wines and cuisine.

In spite of intense competition from New World and U.S. winemakers, Burgundy maintains its longstanding reputation as the place to go to taste some of the world’s most excellent, exclusive and sophisticated wines, as well as, a great deal of lesser quality wines.

One of our key objectives with this video is to promote a better understanding about Burgundy: its people, culture, food and wine for an appreciative and savvy audience.

One of our many production challenges was to attempt to cover multiple events per day with a crew of two persons, while maintaining high creative and technical standards. We were informed that it would be impossible to use standard lighting fixtures in medieval wine caves due to the lack of electrical outlets. This turned out to be only partially true. We ended up lighting the back wall in a 13th century cave with three barn-doored garden lights.

When assessing the professional, battery operated LED lights on the market, we decided to try three of the new Felloni 1×1 Bi-Color High Intensity lights with 30 and 50 degree flood. These battery operated units sped up our lighting set-up time, because we did not need to run cables and we could control not only the intensity, but also the Kelvin color temperatures with knobs on the back of the light.

To take the edge of the light, we used the defusers which come with each light. The quality of the light was very reasonable for a 1X1 LED source. We were quite impressed with the lights, but were unpleasantly surprised by the bulk and weight of the V-Lock batteries and chargers needed to power the 1X1s. Information on the Felloni 1×1 and Z180S from Dedo Weigert Film

On our next Burgundy shoot, we plan on trying out the F&V Z180s Bi-color LED system, which can be used as a single camera-mounted light or you can link up 4 lights together to approximate the size of the 1×1, and runs on lighter Sony NPF or 6X AA batteries, as well as AC power.

In addition to the Felloni 1×1, we used the Litepannels Chroma camera-mounted LED light, which is quite compact and which also offers variable color temperature and intensity controls. What amazed me was how I came to depend on this light when shooting wider crowd scenes and closeups in the dimly-lit room of the Paulée de Meursault. The Chroma runs on AA batteries and/or AC power.

Rudi Goldman Author
IPA Staff ID: 06740 – “I am passionate about covering industry events and creating video promotions and features relating to wine, gastronomy, leisure, culture, travel and tourism.” As former Hollywood producer, director and videographer, I’ve lived and worked in Europe since 1990. I am the owner of communications company Media in English, based in The Netherlands and have Dutch citizenship. My 30+ years as a communicator and video maker, as well as my media training work at Media in English, has given me a unique understanding of the perspectives on both sides of the Atlantic. My work includes the production of many successful and award-winning television programs from Los Angeles, New York, London and Hilversum.
web
http://www.rudigoldmanvideo.com
×

Rudi Goldman Author
IPA Staff ID: 06740 – “I am passionate about covering industry events and creating video promotions and features relating to wine, gastronomy, leisure, culture, travel and tourism.” As former Hollywood producer, director and videographer, I’ve lived and worked in Europe since 1990. I am the owner of communications company Media in English, based in The Netherlands and have Dutch citizenship. My 30+ years as a communicator and video maker, as well as my media training work at Media in English, has given me a unique understanding of the perspectives on both sides of the Atlantic. My work includes the production of many successful and award-winning television programs from Los Angeles, New York, London and Hilversum.
web
http://www.rudigoldmanvideo.com