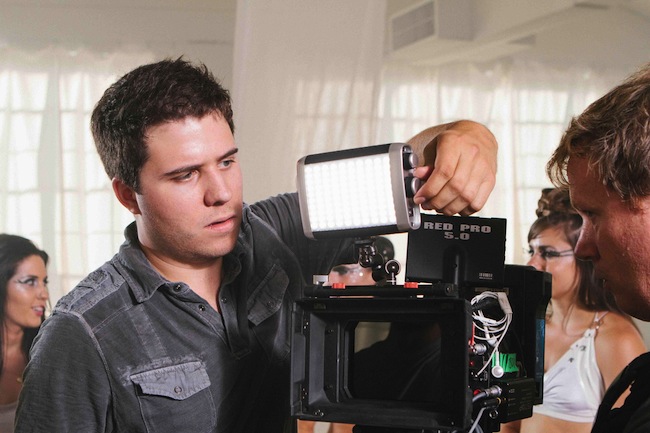 Van Nuys, California: November 28, 2012 – Nashville-based Director/DP Jon Chema battled the usual challenges for a recent music video, “Fairytale,” for independent Kansas City pop artist Helene Michele – tight budget, short two-day shoot, ambitious set ups. “To make the schedule over multiple major set ups, we had to roll, light and move quickly,” Chema explains. “Several locations had limited power and extensive electrical runs with generators were out of the question. We ate up the light because we used the RED Epic and were shooting a lot of high speed. 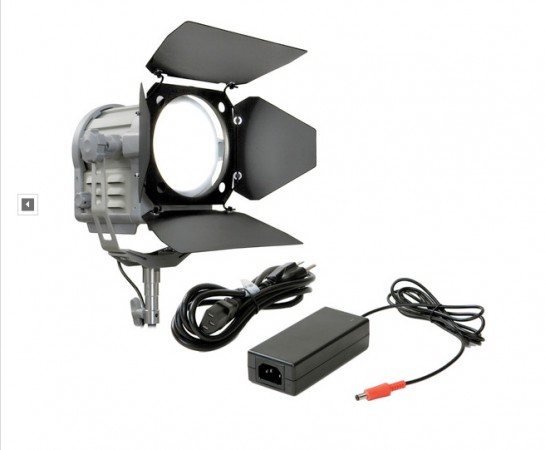 “Litepanels® Sola 6™ LED Fresnels were the perfect solution. It’s more than the quality of soft light and excellent color rendition,” he explains. “It’s also that they are daylight balanced. Tungsten lights require CTB gels to cool the color temperature. That means you lose a ton of light. HMIs still get really hot and require setting up ballast, header, cables, etc.”

On several occasions Chema created unique flares throughout the shot by combining the Sola 6, old Zeiss Superspeed lenses and Optefex Blue Streak filters. “I really love the lo-fi organic character that old lenses give you when paired with ultra-sharp high-resolution cameras like EPIC,” he says. “The quality of light and punch that the Litepanels gave us really helped to showcase this flare effect.”

A handheld Litepanels Sola 6 slightly out of frame added another all-important flare to one of Chema’s shots. “We were shooting in a ballroom with tungsten lights,” he recalls. “Steadicam operator Richard Peterson was getting me some close up passes but the shot just didn’t feel right. We needed a flare to make it pop. You wouldn’t be able to hold any other tungsten or HMI fixture without gloves or rigging. The Sola 6 did the job – it was daylight balanced, lightweight and cool to the touch.”

When in need of an eye light, Chema called on the Litepanels Croma. “The unit has incredible output for just how small and lightweight it is,” he says. “We could easily rig it to the mattebox on the Steadicam. Even though the power comes from six small AA batteries, it is punchy enough to be diffused and still read on camera.”

Chema was always fighting time and space. An 11th hour setup in an isolated hallway with a single questionable 15-amp circuit provided him with a bit of a challenge. “We had to get the shot before we were kicked out of the location,” he recalls. “We didn’t have an area close enough to the building for the generator, nor enough time for a distro run. The solution: 150W china hat bulbed with a 250W photoflood to the ceiling – and two Sola 6 fixtures as edge light.

“Litepanels Solas really saved me on this job,” he says. “The Fresnel nature of the light allowed me a great deal of versatility. Because they set up quickly, I had more time to focus on getting the performance I wanted. The biggest selling points of these lights, for me, are the power efficiency, light weight, and that they are daylight balanced.”

“Fairytale” is a narrative music video showcasing Helene Michel. It will be featured on her website as well as that of Quxotic Fusion – a Cirque du Soleil style dance and acrobatics group featured throughout the video.

[box_light]About Litepanels[/box_light]
Litepanels was founded in 2001 by 5 professional gaffers and engineers who saw the future and pioneered LED (light emitting diode) lighting for motion pictures, television and the audio-visual industry. Their Emmy® award-winning technology has now been used on thousands of productions worldwide and is trusted by the world’s leading broadcast organizations.

Backed by the Vitec Group’s legacy of 100+ years in the broadcast and production industry, Litepanels continues to expand its suite of flicker free, color accurate, fully-dimmable soft lights that talent and Lighting Directors admire. These environmentally friendly fixtures practically pay for themselves with power savings and long life, setting a new standard in professional lighting.  Along with other leading brands in the broadcast and professional videographer industry, Litepanels is part of Vitec Videocom, a Vitec Group company.  For more information on Litepanels, visitwww.litepanels.com

Vitec Videocom brings together some of the most respected, most innovative and most sought-after brands in the industry: Anton/Bauer, Autoscript, Litepanels, OConnor, Petrol, Sachtler, Vinten and Vinten Radamec. It acts as an endorsing brand for these market-leading broadcast, film and pro video products, encouraging multi-brand system sales and simplifying the way that customers worldwide do business.

Vitec Videocom is an operating division within the Vitec Group, an international business serving customers in the broadcast, photographic and military aerospace and government markets. Vitec is based on strong, well known, premium brands on which its customers rely on worldwide.