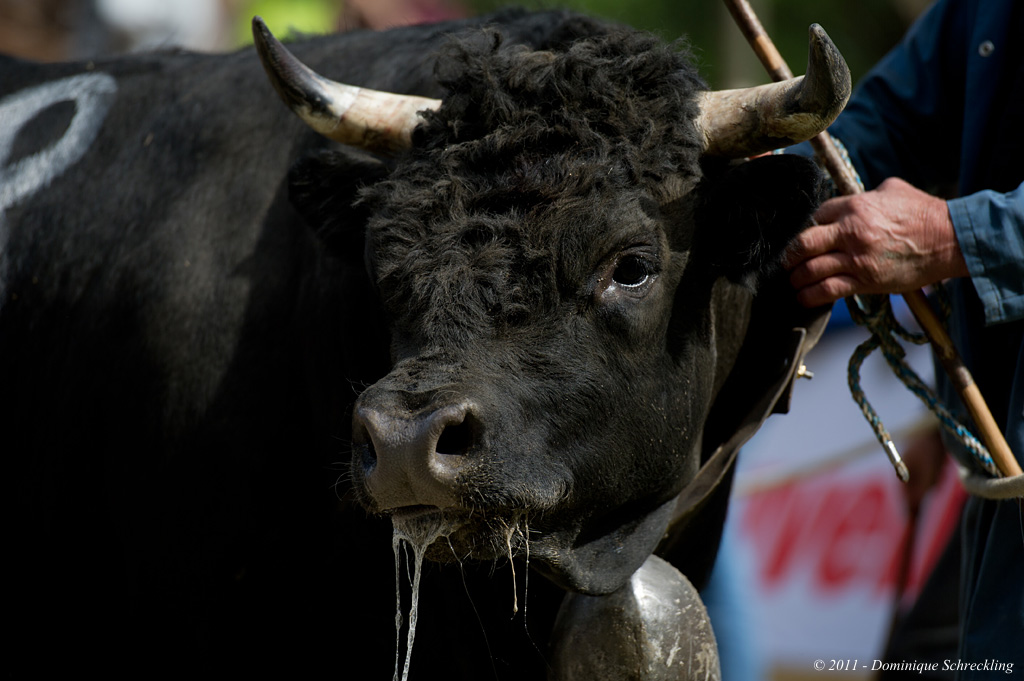 The Swiss Canton du Valais hosts each year a series of a very typical Swiss event, the Combats de Reines, fight of the Queens. Unlike bullfighting in which humans fight bulls, this cow fighting is a bloodless fight with cow against cow. The fights do involve cows of the Hérens Breed. The Hérens Breed is probably a remainder of a cattle population that formerly lived in the region of the Alps between Austria and France. The breed is closely related with the native breeds Castana and Pezzatanera of the Valle d’Aosta in Italy. Hérens cows do have a strong, aggressive temperament and are very territorial. They have an inherent hierarchy in the community. The grazing areas are changed every year, these cows fight when they are moved to a new place. The leader is designated as La Reine, the Queen, of the flock. Once the order is established the herd becomes peaceful, the strongest one will go where the best grass is. The cows are neither prepared nor trained to fight; it is a natural phenomenon and an impressive demonstration of the strength of these animals. This particularity of this breed to fight gave birth around 1920 to the tradition of the Combats de Reines attracting many enthusiasts. The fights are mainly a pushing contest.

Nowadays, the season does start in fall with various fighting events taking place around the Canton du Valais, as well in the valley as in the mountains and ends with the national final contest of the Combats de Reines on the Swiss Mother’s day in Spring in Aproz next to Sion ending with the designation of the Reine des Reines, the Queen of the Queens. The final turned into a joyful popular event attracting a lot of visitors.

This year’s edition took place on May 7th-8th and attracted over 12’000 visitors under a bright sunny day. For this final contest around 200 cows where brought to Aproz. They fight in several weight categories. 12-16 cows of the same weight category are brought into the arena and on a word by the jury, the cows are freed and can move freely. This is the start of an action packed show. The cows choose herselves their own successive opponents and fight in a powerful action fight mostly consisting in pushing against each other and stop fighting as soon as the defeated turns away. The spectator does have plenty of action to watch, not sure on which cows one has to look at in order to not miss the most important fights. The winner will face another cow. The defeated ones are taken out. The last one remaining in the arena is the winner. Despite the muscle strength involved in these fights, injuries do remain rare. There is a tough job on this day: the people inside the arena. Their job is to bring together cows that do not seem willing to fight, take out the defeated ones, trying to avoid that a third cow takes action in an ongoing fight or simply trying to retain the cows within the arena. This is certainly not an easy job, especially not in the category of the heaviest cows, 667-806kg of muscle. This year’s edition designated the cow Manathan (806kg) as Queen of the Queens.