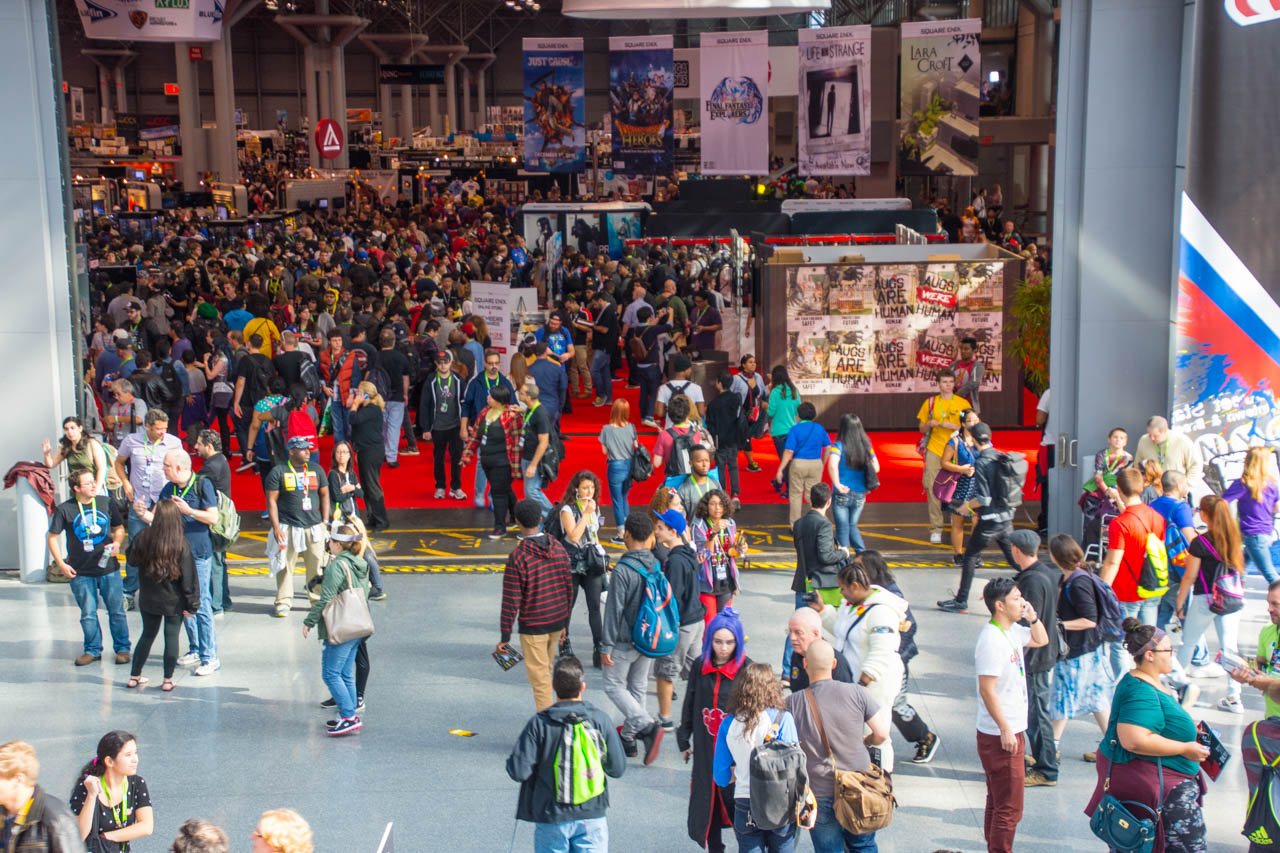 The Greatest Show On Earth – Day One 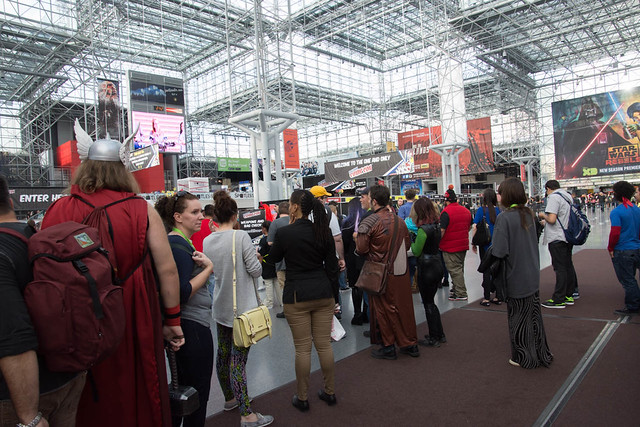 As our readers know we cover many consumer and trade events at the Javits Center in New York.  From the New York Auto show to the International Beauty Show and many others.  None of these shows can compare to the record crowds we saw at Comic Con 2015 held at the center from Oct. 8th through the 11th.

The lines of attendees were blocks long in every direction when I arrived.  The doors were already open when I got there, so I knew there had to be an enormous crowd inside the center.  It was actually shoulder to shoulder in this massive hall, I couldn’t believe what I saw.

Luckily for me entering the show meant wearing my Press ID and passing through the crowds waiting to pass through security and then waiting to enter the show.  Once inside, I realized this show would be a challenge to navigate and to work, I was not prepared properly and decided to go in light with my equipment, leaving a lot of the gear in my car.

Now this show is so large that they had to move some of their panels and screenings to the Hammerstein Ballroom on 34th St. and 8th Avenue.  I have attended many popular shows over the years, but none has compared to this one, none.  You can see the Hammerstein schedule of events here. 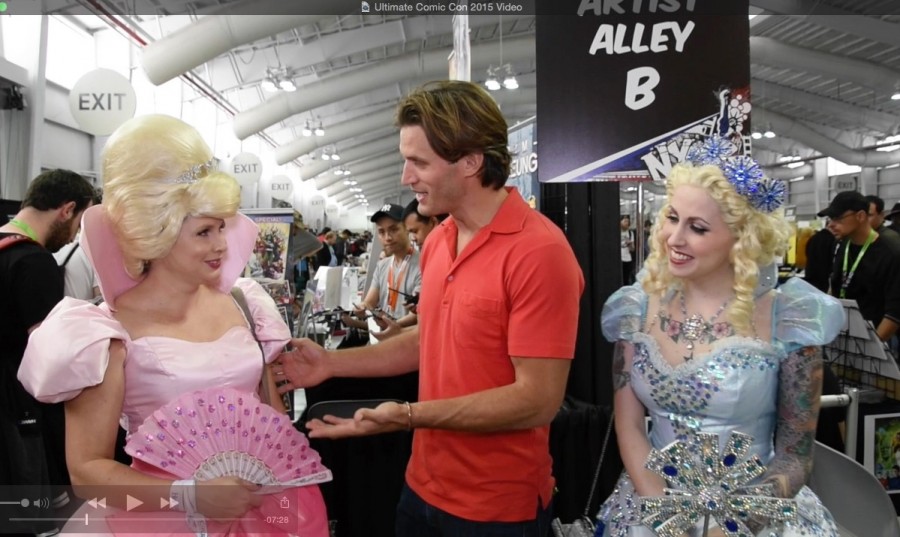 With Andy Peeke at my side we began the journey through and started at the Artists Alley  which was in the North Tower of the Javits Center.

There you could meet some of the better known artists and some of those that were publishing their first books, or were self published. The artist alley was the place to buy some original and printed art work and even get it signed by the artists. 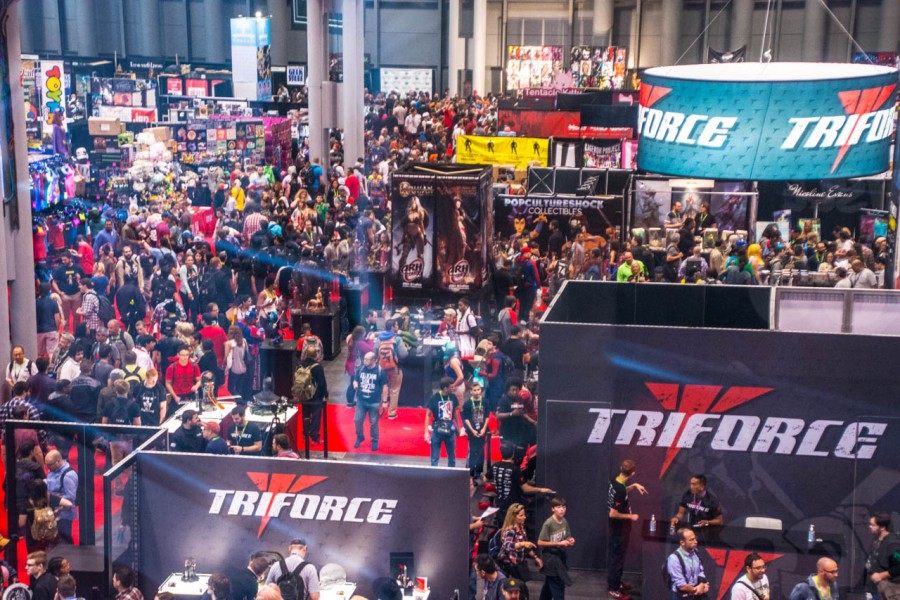 The main floor of the Javits Center is the largest and you can get an idea of the thousands on that floor there to buy product, play hot new video games, see presentations and of course to mingle with others who have traveled to come to this huge event.

Wading through the crowds we stopped a number of them to talk to them about the show and their costumes.  As you will see in the video, most were in character and Andy had fun with them.  Watch the segment with the Joker from Batman comics and Conan two of my favorite clips.

If you were a comic book or model collector you may have been there to sell or buy items for your collection.  As you will see there were hundreds of dealers on the floor.  If you wanted autographs or wanted to attend the many panel discussions, well they set up the entire basement of the Javits Center for that as well. Click here to see all the panels offered at the show.  Here is the link to see companies and individuals autographing.

Now on entering the show attendees would go to the Queue Hall which is the large auditorium where the panel discussions took place. You could sign up and pay to attend these and you are given a wrist band.  Many were sold up almost immediately.  Once you signed up for the panel you wanted to attend it was onto the show floor to see and buy the goodies you came for. 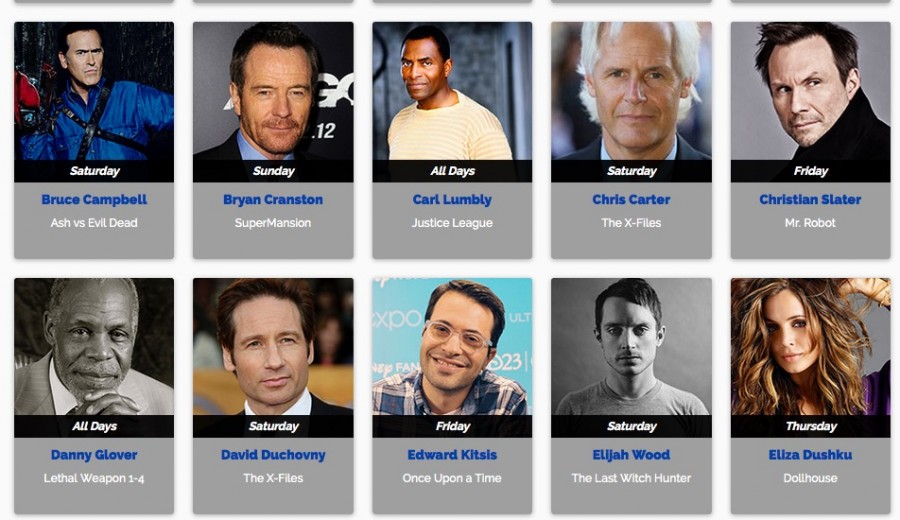 Their guests included the who’s who of actors, directors, artists and so much more.  See their complete line-up here. A short list of the celebrities included: Bryan Cranston, Christian Slater, Elijah Wood, David Duchovny, Danny Glover, Gina Torres (Firefly & Suits), Jaimie Alexander (Blindspot), Jack Black, Lucy Liu, Kevin Smith, Rami Malek (Mr. Robot), Rebecca Romljn, Sam Rami, Seth Meyers, Vin Deisel and so many others. We understand now why there were record crowds at this event. Where else would you have an opportunity to meet some of the hottest stars, writers and producers at any event?

Unfortunately we simply didn’t have time to cover any of this show properly, but maybe next year we will be better prepared.  This is a four-day show and for many that traveled from all over the world to get here it was a special event, one they would cherish as they met others with similar interests and passions.

I covered the first Comic Con show in New York in 2007  but as you can see in some of our photos it was quite small and shared the Javits Center with the NY Times Travel Show.

I never knew it would be this big and frankly wasn’t prepared for what Andy and I saw.  Next year, we will do a better job and try to attend two days to give it the time it deserves.  In the meantime, enjoy the video, we had some great attendees in costume and character that made our coverage of the show fun and a bit kooky.  Great Show, Great People, Fun Day at NY 2015 Comic Con. 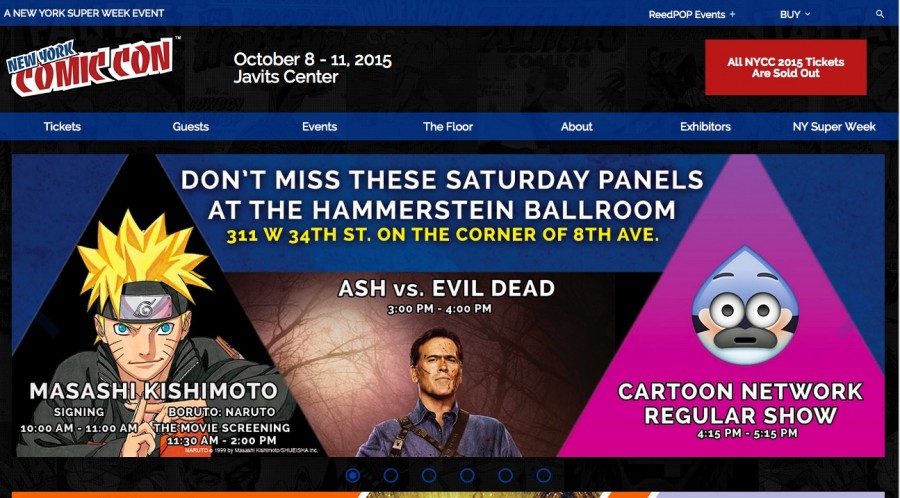 Visit their website to just get a sense of this enormous event, none can compare to the stars attending the show, the artists, film directors, animators and fans that were given the opportunity come to the Greatest Show On Earth…the New York Comic Con Show.