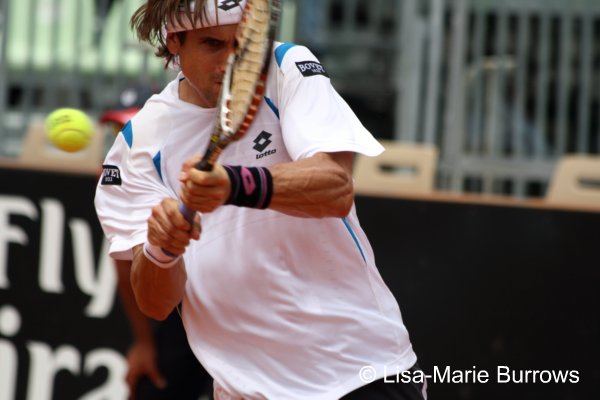 David Ferrer was runner up here against compatriot Rafael Nadal in 2010 and has been extremely successful with his run on clay this season, so it was no doubt that the resilient Spaniard had the goods to pull out a straight sets win today against a tricky opponent who was into his second quarter final in as many weeks.

Ferrer had the first edge at the start of the match as he broke the 16th seed’s service in the fifth game only to be broken back shortly after. Richard Gasquet always proves to be a tricky customer and caused Andy Murray several problems yesterday and it looked like he was wiling to serve up a bit of the same today.

The first set was taken to a tiebreak and saw David Ferrer regain his composure and retrieve seemingly impossible balls, particularly from his backhand to seal the all-important first set 7-4.

The second set saw the steely Spaniard tighten up his game and expose the weaker movement of Gasquet in comparison to yesterday; as he barely lost any points on his own serve. The sole break towards the end of the match was sufficient for Ferrer as he recorded his fourth straight sets win in a row against Gasquet to progress to the semi finals for another all-Spanish mouthwatering encounter after his second round defeat over Fernando Verdasco, but this time he will square off against Spanish No.1 Rafael Nadal.

David Ferrer acknowledged in his press conference that it was a difficult match against Richard Gasquet and was pleased to progress through to the semi finals of the tournament once again:

[quote]“It was a tough match and I am happy getting into the semi finals. It is a Masters 1000 match and it was close and good – it was consistent all the time and the difference was only in some points. When I won the first set it was easier and I saw he was more tired than me.”[/quote]

Against Rafael Nadal tomorrow Ferrer has described the semi final encounter as ‘tough’ and he knows that he is going to have to play his ‘best game.’

[quote]“In Barcelona [against Nadal] I played good but every match is different and I will have to play similar to get a good result. Tomorrow in any case is different.”[/quote]

Will Ferrer be the second Spaniard in as many weeks to pull off a shock win against Nadal on his beloved clay? We can’t wait to watch!