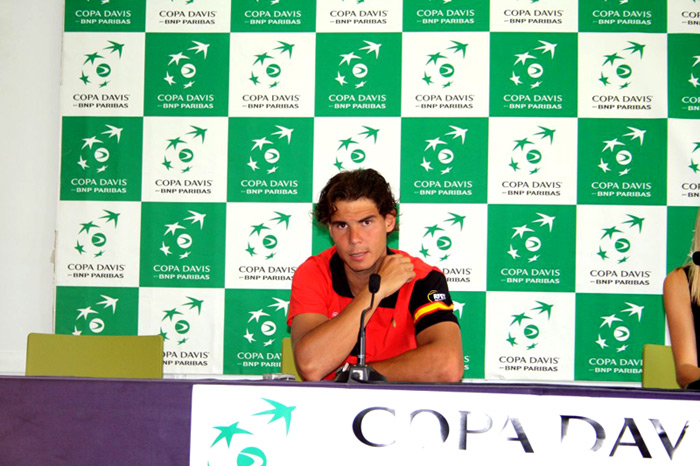 Plaza de los Toros los Califas, Córdoba, Spain – Davis Cup tennis has regularly been criticised for being squashed into the calendar year and often slotted in after major tournaments, making it difficult for players to rest and prepare for their matches.  However, despite such difficulties, the Davis Cup always brings fun, entertainment and noise to a tennis match – and this year, the semi final between Spain and France did exactly that.

People were adorned in their Spanish and French flags, t-shirts and face paints to proudly show which country they represented.  People of all ages attended, with adults enjoying themselves just as much as all of the children.  The heavily Spanish crowd dominated most of the coliseum throughout the weekend, but were not outplayed by the chants and songs of the French contingency.

To kick off the Davis Cup fun was Rafael Nadal.  He started proceedings for his country against Frenchman, Richard Gasquet. The talented Spaniard was back on his beloved clay practicing the day after losing the US Open final to world number one, Novak Djokovic on the hard courts of New York.  Despite feeling jet-lagged, the Spaniard looked comfortable on the dirt as always, racking up a straight sets win against an out-played Gasquet.

Nadal appeared to be in his usual invincible form when his feet touched the clay court surface and was clearly comfortable throughout the match as his forehand continued to fire and dominate, barely letting the Frenchman into the game.  It did not take long for the Spanish number one to defeat Gasquet 6-3, 6-0, 6-1, conceding only four games in the entire match.

The final match on the opening day of the semi-finals was between Spanish number two and world number five, David Ferrer, against the world number eleven, Gilles Simon.  This match had been billed to be more of an exciting contest, with many expecting a closely fought battle.  Simon is known for being a dangerous player and the great fighter, Ferrer, always has the ability to sneak through a tournament.  However, yet again, there was more despair for the French team as they saw themselves rapidly sailing towards a 0-2 deficit going into the third rubber on Saturday.

Unfortunately for Spain and the doubles team, (Fernando Verdasco and Feliciano Lopez), the match did not play out the way that they had hoped.  They were unable to secure the 3-0 lead which would have guaranteed them a place in the final and knew they would have to turn to Rafael Nadal and David Ferrer to continue their winning streak on the last day of play on Sunday.

Jo-Wilfred Tsonga started the match the way he meant to go on – with an ace. Throughout the whole match, Tsonga was playing at a high level and rained down thunderous serves on the dirt in Córdoba.  First blood went to France on the Lopez service game in the first set and Verdasco opened his service game up with a double fault and also dropped his serve as France quickly secured a double break to go up 4-0.  The rest of the first set quickly disappeared as the Spanish pair lost 1-6.

Both Spanish players appeared to be playing at a much lower level compared to usual and neither Spaniard could help raise the level of play of their compatriot as they were both visibly struggling with form.  Despite the continuous support from the Spanish dominated crowd, the Spanish stars eventually lost the match 1-6, 2-6, 0-6.

During the press conference, Feliciano Lopez was asked if his friendship with Fernando Verdasco had altered in anyway, affecting their performance on the tennis court.  The long-haired Lopez categorically stated that such a suggestion was “absurd.”

The third day’s official line up had changed when Jo-Wilfred Tsonga replaced Gilles Simon in the fourth rubber, in the first match of the day against Rafael Nadal.  The atmosphere once more, proved to be worthy of the noise and celebration of a football match.  The Spanish number one was treated to spine-tingling chants of “Raf-a!” repeatedly as he took to the court and every time he struck an outstanding shot the 10,000+ crowds proudly cheered his name in unison.

The tennis supporters continued to play their part that day, as it turned into ‘the battle of the bands,” as each band in the crowd continued to sing their chants and play their instruments to spear on their countryman, however, the crowd may not have been prepared for the demolition of Tsonga’s game in the first set by the Spaniard, despite his strong performance the day before in the doubles match with Llodra.  The booming serve, which was so effective the previous day, seemed to have left the court and exposed the world number ten’s struggling baseline game.  The charismatic Frenchman was unable to hold any of his service games in the opening set and was bagelled 0-6 to the surprise of many of the spectators and the French team.  Throughout the first set, astonishingly, Nadal did not drop a single point on his serve.

Despite proving to regroup more in the second and third sets, Tsonga was unable to make any impact on the Spaniard’s service game and often came out the worse in their long baseline exchanges. As a result, Tsonga lost the match 0-6, 2-6, 4-6.  During the interview after the match, Nadal was visibly happy with his performance:

[quote]I’m really happy for us [Spain]. It was a great atmosphere and the crowd was really unbelievable.  I think I played well, very solid from the baseline. I was solid with my serve and that fills me with confidence.[/quote]

The victory enabled Spain to gain the final point they needed to secure their place in the Davis Cup final in December against Argentina after they had defeated Serbia in their semi-final matches.   Many members of the crowd thought that the final rubber would not be played, however, to the delight of the crowd, the fifth dead rubber did take place between Fernando Verdsaco and Richard Gasquet.  The French crowd were hoping that Gasquet would be able to retrieve a point and improve their 1-3 current score, yet once again, the Spanish team proved victorious as the world number 22, Verdasco, defeated the deflated French player, ranked seven places above him in the ATP rankings, 6-2, 6-1. 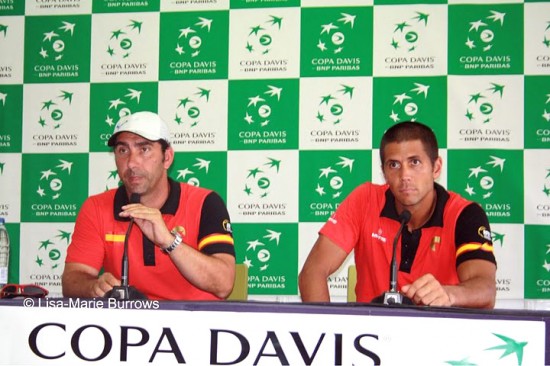 In the press conference after the final match, Albert Costa (the captain of the Spanish team) and Fernando Verdasco were clearly pleased with the results of the day.  When questioned already about the location of the final against Argentina, the Spanish captain revealed he had no preference and just wanted to enjoy the semi-final victories:

“We will celebrate with a meal with our team, friends and family and have a little party.”

To view the whole collection of photographs please click on the following links:

The bullring itself was huge, magnificent and a fantastic setting for the Davis Cup. Once the trumpets began to play, the drummers drummed and the crowd was shouting, it transformed into one of the greatest fiestas out there. No doubt the party and celebrations will be as equally large as the Spanish and Argentinean teams prepare for the final of the Davis Cup to be held in Spain at the beginning of December.  As of yet, no official location has been given, but wherever it may be, the finals will surely bring another big fiesta to celebrate the end of Davis Cup 2011.