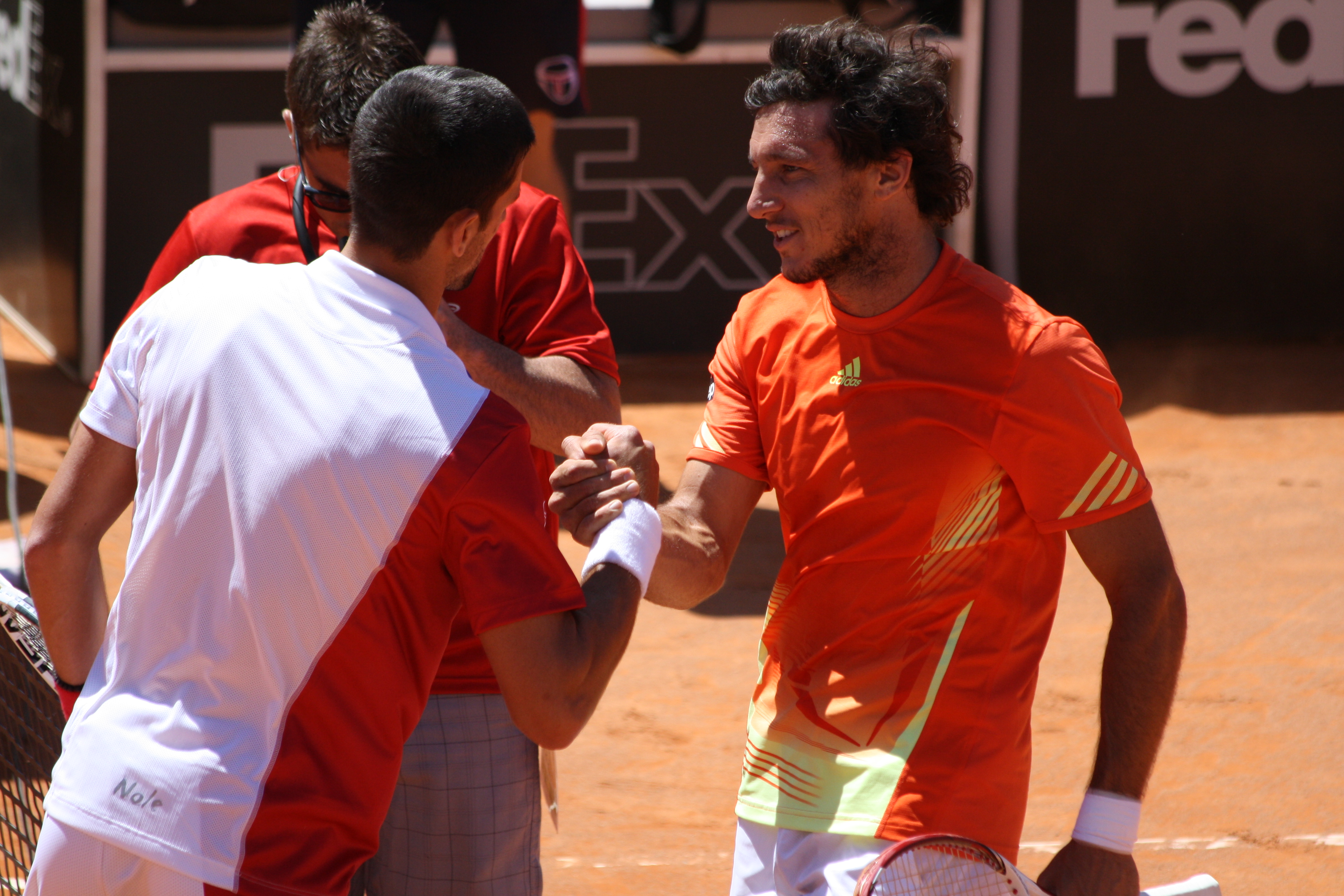 Internazionali BNL D’Italia, Rome – World No.1 Novak Djokovic found himself embroiled in another battle on a packed Campo Centrale today against tricky Argentine Juan Mónaco and had to fight back from a set and a break down to close out the match and progress to the quarter finals with a 4-6, 6-2, 6-3.

It was a gladiatorial effort from Novak Djokovic on court today as he was thoroughly challenged from the onset by Mónaco. It was the recovering Argentine who dealt the first blow and broke the slow-starting Serbian’s service game. The top seed made more unforced errors than usual and Mónaco was often causing him to make more errors as he pulled him from each side of the court and kept him on the stretch.

Juan Mónaco, fondly known as Pico, was forced to hold his nerve and serve out the first set. His service game was aggressive, forceful and he mixed up the rallies well, including a brave, deadly drop shot, which worked beautifully, but could have gone disastrously wrong before securing the first set 6-4.

Mónaco opened up the second set just as strong and was painting the lines beautifully with every shot and kept the world No.1 on the move and on his back foot. The usually flexible Djokovic was stretched too far and could do nothing more than watch as the Argentine turned from defensive to offensive during the rallies and led by a set and 2-1 in the second.

As both players sat contemplating the events of what had happened during the change of ends, Mónaco’s feet were pumping furiously with momentum whilst Djokovic sat still and staring into space, gathering his thoughts and reflecting on what had happened. He knew he had to pull something special out of the bag and maybe thoughts of his defeat at the hands of compatriot Janko Tipsarevic began to ring through his head? Who knows, but whatever it was, it worked.

The world No.15 stepped back out onto the red dirt to consolidate his break and failed to do so convincingly. Mónaco struck a few unforced errors and could do nothing other than shout ‘Ay, ay, ay!” as his backhand sailed into the net.

Within minutes, it was evident that the tables had turned and suddenly the more arduous rallies swung in favour of the Serb and he broke on two more occasions to take the second set 6-2.

The third set displayed more laborious rallies which were grueling on the body and demanding of the mind, but both players held their nerve and their competitive play reached its pinnacle. Djokovic’s level continued to rise and Mónaco could do little to put a dent in his armory towards the end and with an “Ay, buena!” at the thunderous forehand unleashed during the 7th game, the world No.1 got the break he was so desperate to seek before closing it out 6-3.

For Juan Mónaco it will be a difficult loss after being a set and a break up, but no doubt he will be pleased with his performance after he came back from a serious ankle injury which he sustained during the Monte Carlo Masters a month ago. He has won two clay court titles this year and there were doubts as to whether he would return from injury the same way after his great form before the injury, but he stepped out onto the courts this week believing he can win and should be filled with confidence about his performance before Roland Garros.

During the press conference with Novak Djokovic I asked him how concerned he felt when he was a set and break down and how he maintained his winning mentality. He told me:

[quote]“Mentality is what is needed and especially when you are playing against a player who prefers this surface and has already won two tournaments on clay this year and he plays with confidence so when I stepped onto the court today he took his chances and then I got into the rhythm and started to play better than in the beginning of the match.”[/quote]

For Djokovic, the world No.1 believes that staying positive despite the results or problems you face is the key to winning any matches:

[quote]“If you think positive then you will have a positive outcome and I have enough experience to know what to do and I used it today.”[/quote]

Djokovic admitted how he respects his tennis ‘rivals’ Rafael Nadal and Roger Federer for their result and good work they have done for tennis:

[quote]“First of all I respect them as tennis rivals and good examples of champions and they have done a lot for many generations . I am not thinking about popularity, I am here to enjoy what I do and win as many matches as I can and if I can be an example to kids and up and coming talent, especially with my Foundation to let kids realize their dreams…”[/quote]

Lisa-Marie Burrows covered the Mutua Madrid Open last week and is currently in Rome covering the all of the action from the Masters. Catch her on Twitter: @TennisNewsViews.