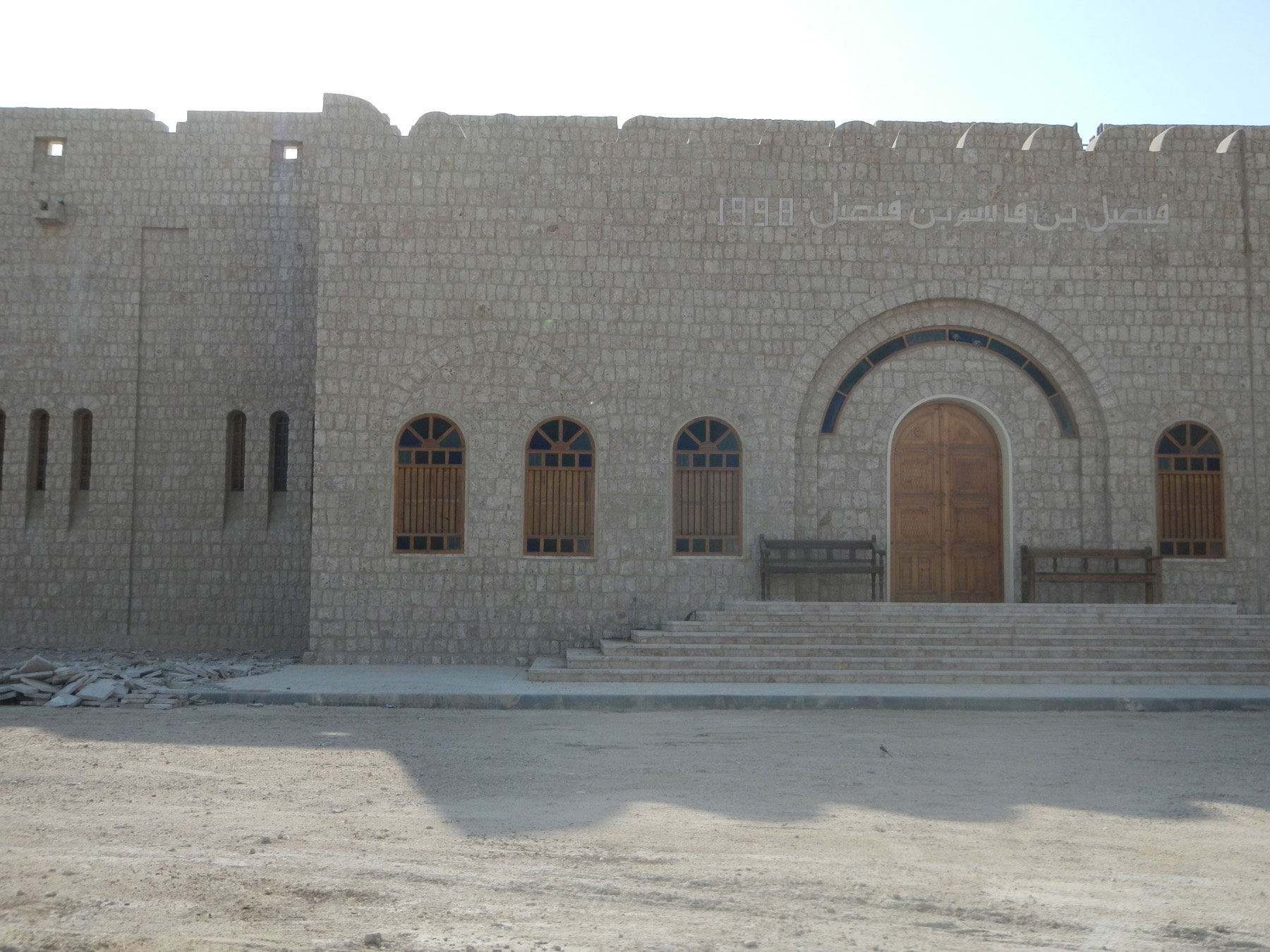 [dropcap]T[/dropcap]he open door of a castle wall beckons us into the Hall of Islamic Arts. I was unprepared for what was to follow during the next two and a half hours. I literally found something new around each corner leading into yet another new hall of artifacts. The Sheikh Faisal Museum is a place where the past is alive and well.

Sheikh Faisal bin Qassim Al Thani, the museum’s private collector, is the great great-grandson of Jassim Al Thani, the founder of Qatar. Sheikh Faisal has been collecting antiques and artifacts since the 1960s, and according to museum staff, exhibit pieces currently total more than three thousand. The five halls – soon to double in size as a new addition receives final touches – comprise collections under three major categories: Islamic Art, Qatar Heritage, and Coins and Currency along with Pre-Islamic artifacts in all the above categories.

The museum’s Islamic Art collection encompasses objects produced between the 7th and 19th centuries from people living in the Middle East, Far East and Africa. Arrowheads and numerous fine examples of silver-plated and inlaid steel Mughal daggers and swords are displayed along with a fine 19th Century Moroccan powder gun with ivory and silver inlay. 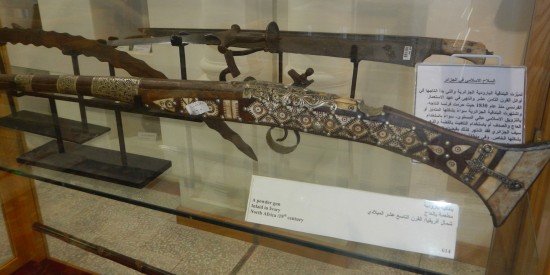 Entering a connecting hall, visitors are introduced to fine examples of wooden works, including numerous engraved, traditional wooden doors with Arabic inscriptions and a marvelous example of an 18th Century wooden Indian cart engraved and decorated with natural dyes.

Row upon row of paintings along with a unique two-headed bronze horse anchor an end of the hall before connecting to vintage motorbikes, bicycles and early prams and tricycles.

Historic car buffs will be awed by this fascinating and eclectic collection of vehicles – including a 19th century steam car – vintage trucks, an airplane and the renowned Williams FW27 Grand Prix Racing Car from the 2005 F1. Rare Model T Fords, Model A roadsters, era Chevy’s, Desoto’s, Mercedes Benz and Dodge vehicles ranging from the 1910s up through the 1960s are well represented.

As an expat visitor, I found myself naturally drawn to the key displays in this hall as they portray the Bedouin way of life and offer glimpses into Qatari heritage that reflects the continuing evolution of the culture. Actual Qatari fishing boats and dhows, fishing equipment and early pearl diving apparatus are very impressive. Qatar heritage is further illustrated via two ample sized Bedouin tents and a stone well drilling down at least 10 feet complete with water barely discernable at the bottom. A large air bellow rests aside a campfire, once used to keep the huge flames burning to allow for cooking and roasting meat. Miscellaneous everyday utensils and objects, which are also important components of Bedouin Arab history, are scattered about helping to tell the story. 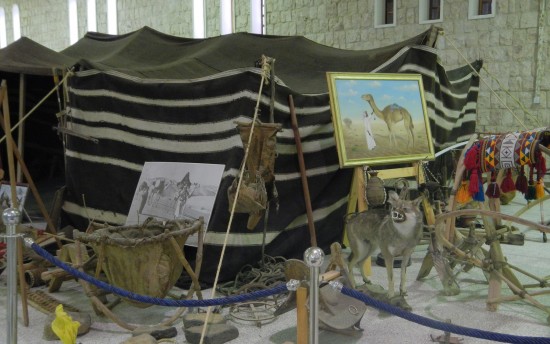 A separate area in this hall houses Islamic, Jewish and Christianity artifacts as well as private rooms set up illustrating 19th century kitchens, bedrooms and the appropriate fashions of the day.

Sheikh Faisal’s collection includes both pre-Islamic and Islamic coins ranging from the Umayyad’s to the Ottomans. Banknotes from across the world are also displayed.

Numerous manuscripts, Qurans and centuries-old leather bound books are preserved in a climate-controlled wing of the museum across the hall from another air-conditioned section housing unique styles of jewelry, textiles and embroidered clothing.

One of the highlights for me was the reconstruction of an upper class home from Aleppo, Syria. The structure was dismantled and relocated to the museum where it was painstakingly reconfigured. The fine detail and magnificent ceiling and wall designs and their respective colors are incredible.

Massive groupings of wooden and metal inlay wardrobes, chandeliers, chairs, fans and the like overpower the length of one of the hall walls. The pieces are massive and impressive! Under a glass display is a fascinating collection of women’s sabots (wooden shoes) dating to the Ottoman period. Many were inlaid in mother of pearl, ivory and silver while others were painted with natural dyes. 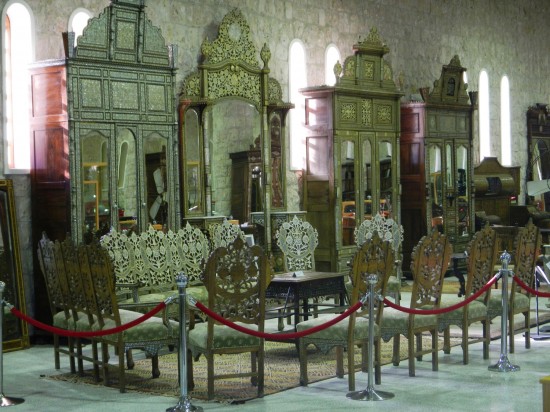 Scattered throughout the halls are hundreds of carpets and antique rugs both on the floor and hanging behind glass frames on walls, which are also part of the museum collection. Think of the stories behind the designs, workmanship and depictions of these wool and silk threaded masterpieces.

Two courtyards featuring individual wooden carts and miscellaneous wagons and wheels rounded out the exhibit. One of the courtyards had yet another deep well. The courtyards looked to be unfinished works in progress.

If you find yourself in Doha, Qatar, a visit here is a must. The Sheikh Faisal Museum leaves a lasting impression, particularly for history buffs that want to learn more about the rich Arab culture and Qatari heritage and the historic events that contributed to their evolution.

The museum is open from 9 a.m. until 6 p.m. Mondays through Thursdays and on Saturdays. It is closed on Sunday and Friday. Call +974 4486 1444 for directions and to schedule your museum visit and reserve an English-speaking tour guide if you are booking a private group tour. Admission is free. The Sheikh Faisal Museum is a member of the International Council of Museums – UNESCO.