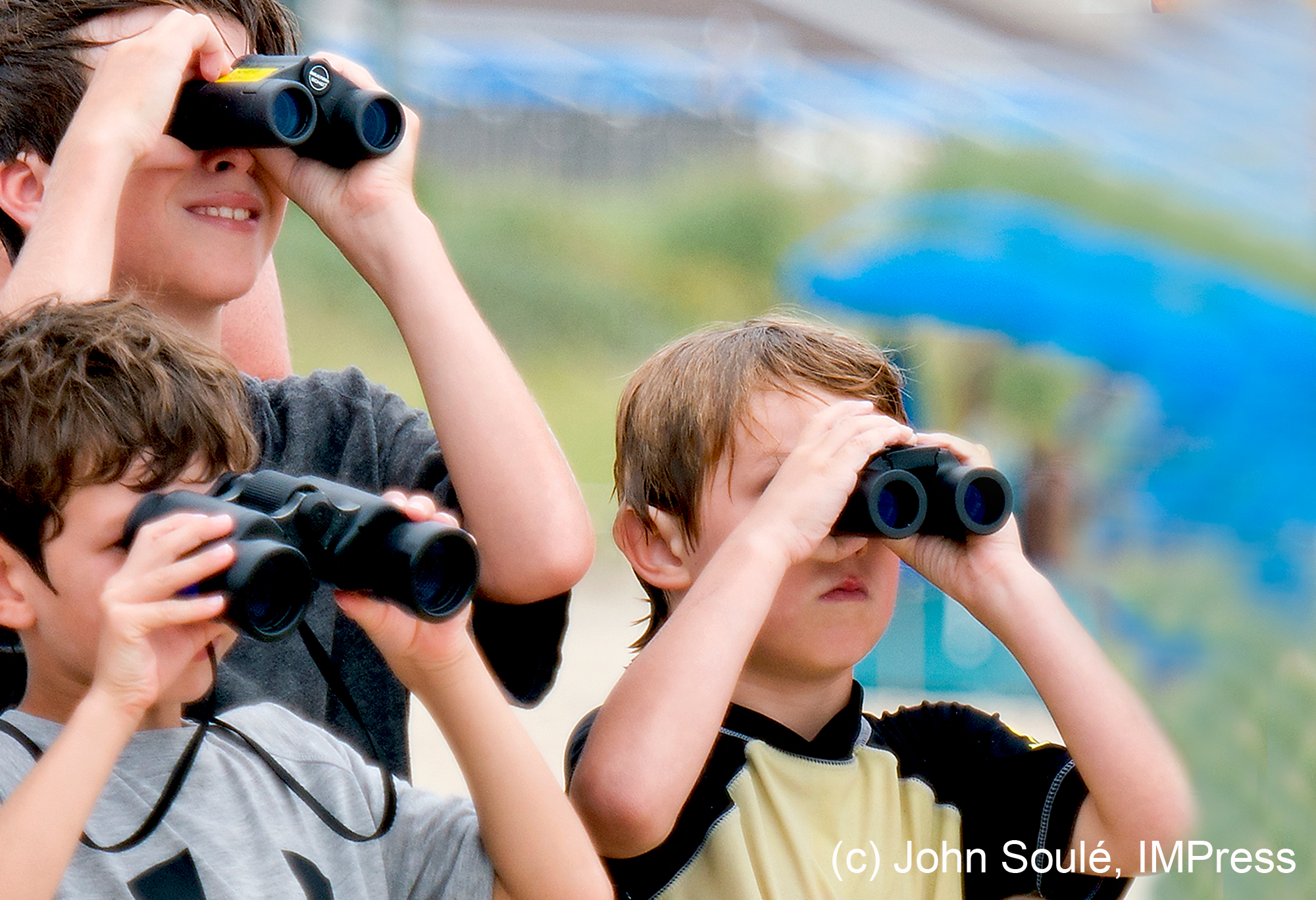 Spending the day at the beach can mean a lot of sights and sounds for those of every age.  And for those familiar with mid-Atlantic beaches, know that part of the excitement of being at the beach is scanning the waters just offshore for a glimpse of passing marine life.  It often starts with someone pointing at an area just a few hundred feet offshore, and then the excitement spreads – it just never gets old – no matter what your age and no matter how many times you have experienced it.  It may only last a few minutes – but it is always worth it.  So what is all the excitement about?  Dolphins!

Atlantic Bottlenose dolphins use Maryland waters as a thoroughfare for migration, summertime breeding and as a feeding ground as they travel in pods (groups of 10-30) north from the Carolinas to Delaware and New Jersey waters in the summer.  The most prevalent populations are visible during the month of July, when the water temperatures hover around the mid-70s.  In October, they reverse their path and  travel south to the warmer waters off the Carolina coast.

These curious creatures that we have grown to love from the 1964 TV series ‘Flipper’ and the 2011 movie ‘Dolphin Tale’, always seem to have an infectious smile.  Many of us have watched them perform at various venues, including some aquariums.  But this time they are being seen in their natural environment.  And that is especially exciting.  [box_light]The Dolphin Count[/box_light]

Dolphin counts are carried out at different times, and by different state organizations, all along the mid-Atlantic coast.  The National Aquarium in Baltimore Maryland  is one of several East Coast organizations that participates in these annual dolphin counts.

The data is added to historic data  and “shared with other state organizations” according to Jennifer Dittmar, Marine Animal Rescue Program Stranding Coordinator of the National Aquarium.

This is our “…15th year for the Maryland Dolphin Count”, CEO Mr. John Racanelli of the National Aquarium proudly told me.  It has “turned into a very productive, very powerful annual tradition.”

Three observation posts were established along a 26-mile coastal area stretching from Assateague State Park through Ocean City Maryland and ending just before the Delaware State line.   Binoculars were provided for public use during the three hour count.  Offshore, a vessel-based team was aboard a US Coast Guard boat which allowed volunteers to see dolphins up-close, examine their behavior and estimate their ages. The Coast Guard boat, aided by sonar, conducted one sweep off the coast to provide a more accurate count by reducing duplication and remained in contact with the shore-based teams.[box_light]Volunteers show their concern[/box_light]

Over 100 volunteers from the public and just over  30 from the National Aquarium, (clearly visible by their blue shirts), came and logged the number of dolphins in each pod and whether any calves were visible.  The volunteers looked at the fins, noted the direction the dolphins were swimming and what they were doing at the time of the observation.  I found that CEO Mr. Racanelli, his staff and volunteers, showed an obviously strong passion for the care and welfare of marine life and a speical interest in public awareness.   And, despite very threatening weather, this dedicated group was not deterred to complete their task at hand – rain or shine, the count went on.

Much of the East Coast had been battered by storms during the week. The waters were rough and the swell waves large.  This may have in part  attributed to this year’s count of just 31 dolphins – a much lower number than the 100+ that had been counted in 2011).  There are many factors that can affect the ‘snapshot in time’ for these counts – “the size of waves, the lack of food and the weather conditions in general”,  according to Katie Hendrickson, Media Relations Manager for the National Aquarium.

The annual counts allow marine specialists and researchers to gather a “snapshot” view of the population status of the Atlantic Bottlenose dolphin.  The information is then gathered and analyzed to learn more about the state of the waters and the dolphin populations that are found off the coast.

By reviewing the population numbers over the years can help to determine the health of the coastal ecosystem, as well as the abundance of prey. 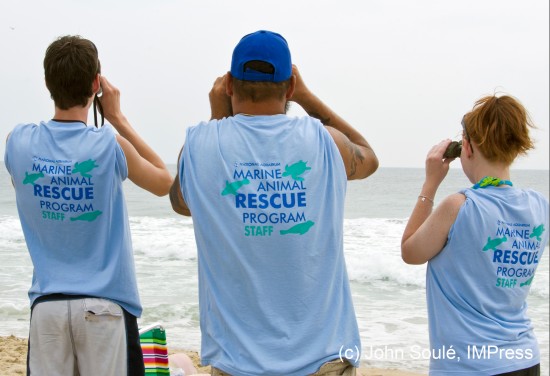 The National Aquarium Marine Animal Rescue Program works hard throughout the year to monitor and respond to marine animals off of Maryland’s coast, while educating the public about keeping  waterways safe and healthy for the animals we love so much.

According to Ms. Hendrickson in a recent Media Advisory: “Since 1991, the National Aquarium Marine Animal Rescue Program (MARP) has been responsible for responding to stranded marine mammals and sea turtles along the Delmarva (Delaware, Maryland, Virginia) Peninsula, primarily along the nearly 7,000 miles of coastline in Maryland, including the Chesapeake Bay and Atlantic coasts.

MARP has responded to more than 480 animals in distress and has rehabilitated and released nearly 100 marine animals back to their natural environment. Many of these animals are endangered or threatened, so every individual introduced back into the natural environment has the opportunity to add to the genetic diversity of the species. All species of marine mammals are federally protected under the Marine Mammal Protection Act of 1972, and all seven species of sea turtles are federally protected under the Endangered Species Act of 1973.  Research, satellite tracking and outreach education are also significant components of MARP.

Every animal that is rehabilitated and released is an opportunity to raise awareness and get the public involved in helping to conserve and protect our marine resources.   MARP is a member of the Northeast Stranding Network (NERS) through the National Oceanic and Atmospheric Administration (NOAA). The Aquarium is one facility among a network of nationally recognized facilities that work cooperatively to respond to stranded marine mammals and sea turtles. MARP works directly with NOAA, USFWS, Maryland Department of Natural Resources and regional and national stranding partners to respond to stranded animals and collect data used to better understand aquatic animals that are still very much a mystery to modern science.”

The Maryland Dolphin Count activities really kicked off the night before with a fundraiser held at an Ocean City beach club where a little over $2,000 was raised for National Aquarium Marine Animal Rescue Program. The public was encouraged to attend the event and join the Dolphin Count the next morning at one of the three counting locations. 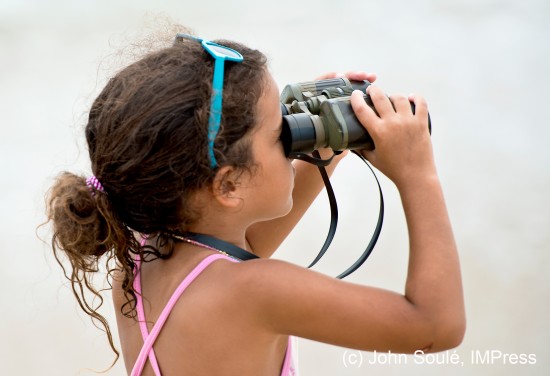 Tall blue banners were placed to mark each of the counting posts.  Teams set up early in morning – long before anyone normally hits the beach of a day of ‘fun-in-the-sun”.  A large box was filled with binoculars for public use.

Although the weather was threatening, the public still came to observe and learn – from the old to the young.

Mr. Racanelli stated that “…we really do bring the community into it.”

Dr. Brent Whitaker, Senior Director of Biological Programs for the National Aquarium, has been working with marine life for over 30 years and associated with MARP for over twenty years.  He told me that the annual Dolphin Count was really more about educating the public – especially “…the children.  They are our future”.  It is “…all about awareness… awareness means to protect those animals.”

At times, dolphin encounters with humans can be harmful as dolphins are hunted as food and inadvertently killed as a by-catch of tuna fishing.  Fortunately Atlantic Bottlenose dolphins are not endangered. Their future is stable here because of their abundance, adaptability and their protection by those who care.

Mr. Racanelli stated that activities like the Dolphin Count are hosted by the National Aquarium throughout the year, and summed it up nicely by stating  “…the purpose of which is both really to learn about our natural environment here and also to engage people more in knowing.  With knowing comes caring.“

[box_light]Footnote[/box_light] After spending a morning with the staff and volunteers of the National Aquarium, I had the pleasure to witness the commitment and true passion each of these individuals has for the care of marine life.  My hat is off to them for a job well done – they are quite an inspiration. I look forward to providing future articles on the wonderful work they do.

The next time you are in Baltimore, drop by the National Aquarium and see what all the excitement is about. (And be sure to catch the Dolphin Show!)  For tips on taking pictures while at an aquarium, please see my article “Underwarter Photography – staying dry” also on this site.

I encourage you to learn more about the various organizations in your area that are dedicated to the care and welfare of marine life and our planet.  “…with knowing comes caring.”