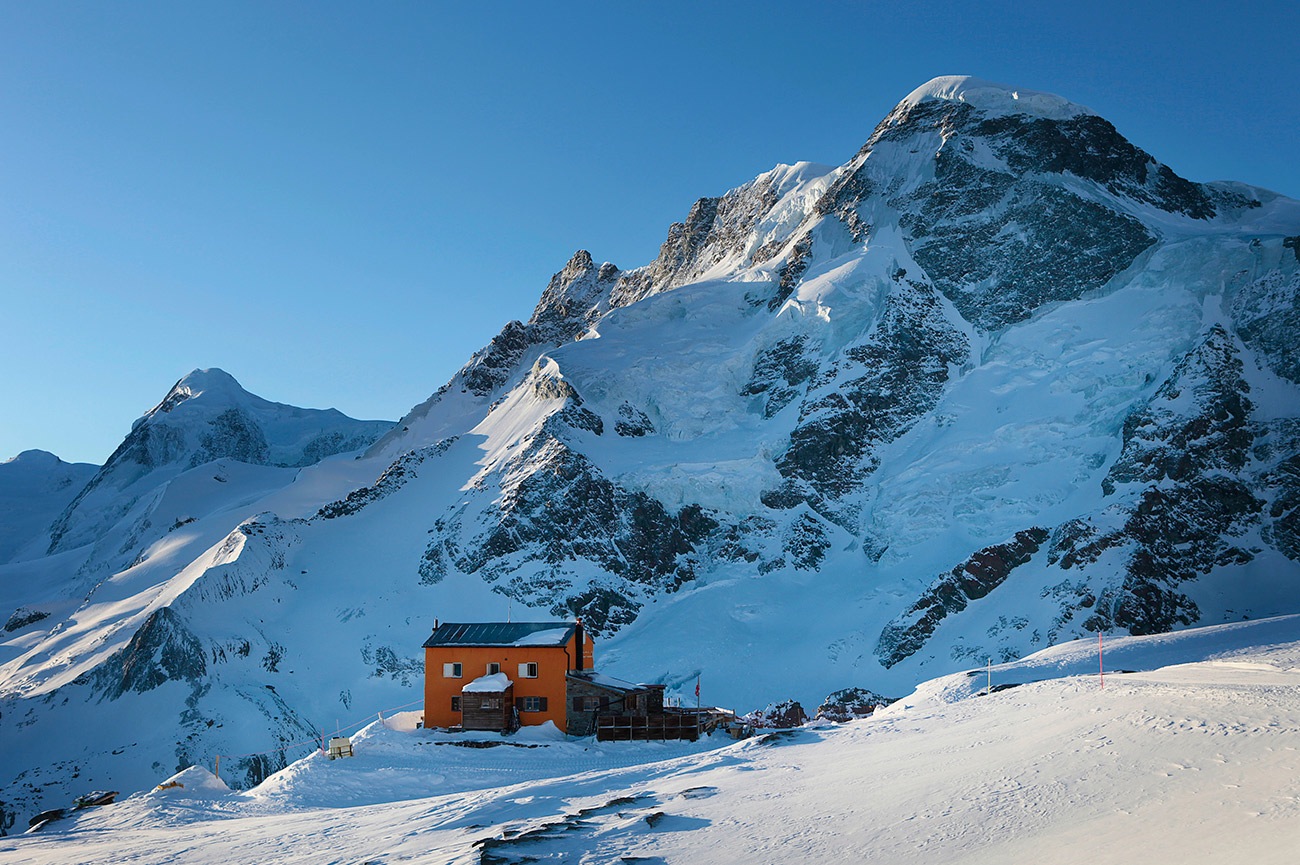 ZERMATT/LONDON, 22 OCTOBER 2013: Imagine relaxing in the warm spring sunshine, pure glistening snow and mountain peaks all around, the majestic Matterhorn piercing a cloudless blue sky, and listening to one of the best jazz bands in the world.

An international collaboration is planning a concert with a difference: Ronnie Scott’s All Stars – the house band from the world-renowned Ronnie Scott’s Jazz Club in London – are to play at a record-breaking altitude of 3030m (nearly 10,000 ft) beneath the Matterhorn as part of the Zermatt Unplugged music festival in Switzerland from 8.-12. April 2014.

The five-piece jazz band will be playing a series of free lunchtime concerts – Extreme Jazz – at the Gandegghutte, which perches on a precipitous ridge in the Matterhorn glacier paradise ski area and is surrounded by Switzerland’s most dramatic peaks – Monte Rosa, Breithorn and of course the towering Matterhorn.

Staging an outdoor concert at this altitude, where temperatures can reach minus 20C at night, and the air begins to thin, poses a considerable production challenge, but preparations are already in full swing. While the Ronnie Scott’s All Stars and their instruments will make the 1500m (almost 5000 ft) ascent from Zermatt village to Gandegghutte by cable car and skidoo, the grand piano will make a dramatic entrance, suspended beneath a gleaming Air Zermatt helicopter.

With many of the artists at Zermatt Unplugged performing in venues in the village and at lower mountain locations, the Extreme Jazz concerts mark a first for the festival in taking live concerts to such an altitude; in fact the performances will break the altitude record for Europe’s highest stage.

It is also the first time that acoustic jazz has been included in the Zermatt Unplugged programme. And for those who prefer their jazz a little less ‘extreme’, the Ronnie Scott’s All Stars will also be playing at venues in Zermatt village during the evenings as part of the festival, and at the final Farewell Brunch.

Now in its 7th year, Zermatt Unplugged is Europe’s biggest acoustic festival, and is becoming as popular as the world-famous resort itself. For music lovers, skiers and mountain enthusiasts, the festival offers an exciting mix of top talent as well as superb end-of-season skiing and adventure in unsurpassed Alpine terrain.

Festival CEO Rolf Furrer said “The Extreme Jazz concerts underline the fact that Zermatt Unplugged offers concerts of outstanding quality in front of a unique backdrop.” With a nod to the first conquest of the Matterhorn by Englishman Edward Whymper, Mr Furrer added “And we welcome the collaboration with our British partners – this is, after all, not the first time in the history of Zermatt that they have inspired such an incredible pioneering spirit.”

CEO of Ronnie Scott’s, Simon Cooke said, “I can’t believe we have to go to these lengths just to get a gig, but of course it’s a great opportunity to take Ronnie Scott’s to a new and appreciative audience! We are very much looking forward to the Zermatt Unplugged week in one of Europe’s top ski resorts, and to enjoying performances from other outstanding musicians.”

The Extreme Jazz concerts are the brainchild of international theatre producer and Zermatt devotee James Cundall, CEO of Lunchbox Theatrical Productions. “I have been coming to Zermatt for 25 years and think it is the most inspiring and magical resort. The Gandegghutte, which dates from 1885, is one of my favourite ‘stops’ in the mountains – it has a unique position right above the glacier and has all the magic of a real Swiss mountain cabin. I took my friend Simon Cooke of Ronnie Scott’s there and we dreamt up what for us epitomised the perfect concert. I’m delighted that Zermatt Unplugged were so receptive to our somewhat challenging idea!”

The 7th edition of Zermatt Unplugged takes place from 8th – 12th April 2014. More information about the festival can be found on www.zermatt-unplugged.ch.

[box_light]Save the Date(s)[/box_light]
Advance ticket sales for Zermatt Unplugged 2014 and announcement of the programme of this year’s Season Opening will start on the 5th November 2013. The Season Opening will take place on the 27th and 28th December 2013 and will present three concerts in the Club Vernissage and in the parish church of St. Mauritius in Zermatt. Advance ticket sales and announcement of the programme with the main acts of Zermatt Unplugged 2014 will start on 12th December 2013.

[box_light]Zermatt Unplugged in the British media[/box_light]
The Times, 18th February 2012, Roger Alton
“If you prefer your music festivals with a side of waist-high powder rather than mud, and a day of superb skiing, then Zermatt Unplugged should be just the ticket. … Zermatt Unplugged pulls in thousands of music lovers, skiers and boarders to this most glamorous of ski resorts, 5,3000 ft up the Valais region, and with the shiveringly beautiful outline of the Matterhorn wherever you go. Zermatt’s acoustic festival is becoming as popular as its peaks and slopes.”

Mail on Sunday, 27th March 2011
“Zermatt offers superb end-of-season skiing, as well as the most civilised music festival in the world.”

The Sunday Times, 7 October 2012
“Zermatt Unplugged offers a refreshing change of atmosphere from the dance parties that dominate many other mountain music events.”