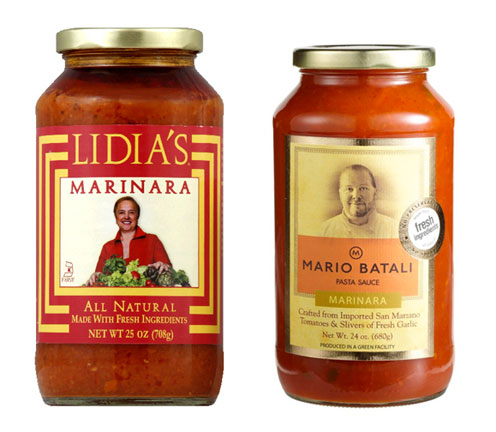 Only 3 of 26 products judged Excellent…Half of soups, sauces, and salad dressings judged average with some no better than Kraft, Campbell and Progresso

YONKERS, NY — Many celebrity products cost two or three times the price of leading national brands, but Consumer Reports’ tests of 26 celebrity goods in a host of categories reveal that a famous name is no guarantee of a starring role: Only 3 of the 26 celebrity foods earned a Rating of Excellent: Giada De Laurentiis Tomato Basil pasta sauce, Mario Batali Marinara sauce, and Wolfgang Puck Tomato Basil Bisque.

Ten products were rated “Very Good” including Lidia’s Marinara, from Lidia Bastianich, and Rao’s Homemade 8 Star Balsamic Vinaigrette, from the exclusive New York City restaurant. Half of the products tested were only rated average, with some no better than cheaper mainstream brands such as Kraft, Campbell, and Progresso.

CR’s tests included products from chefs who cook on TV (Lidia Bastianich, Mario Batali and Giada de Laurentiis, for example), from restaurants that achieved notice beyond their hometowns (Original Bookbinder’s in Philadelphia, and Delmonico’s in New York City), and from Hollywood heavyweights (Francis Ford Coppola, Paul Newman, and Paul Sorvino). CR also included brands linked to other notables: Muir Glen, named for John Muir, the naturalist and writer; and Pritikin, whose founder was an early promoter of diet and exercise and included The Silver Palate, a New York specialty-food store that inspired a series of cookbooks.

The pedigreed products CR tested typically cost two to three times as much as garden-variety brands. For example, The Original Soupman Tomato Basil (created by the “Soup Nazi” character depicted in “Seinfeld”) costs 36  cents per ounce vs. 11 cents per ounce for Progresso. The price gap was notable among pasta sauces and salad dressings, too. A half-cup of Ragu is 42 cents vs. $1.41 for Rao’s. For 2 tablespoons of balsamic vinaigrette dressing, Kraft cost 18 cents, Delmonico’s, 39 cents. What’s more, Delmonico’s ranked lowest among the dressings CR tested.

Often because celebrity brands cost more they contain better ingredients — like whole tomatoes from Italy instead of tomato paste or puree, and fresh rather than dried or dehydrated herbs and seasonings. Still, you can’t always tell. Many celebrity products include such ingredients, but others don’t. Mario Batali’s $8 bottle of Marinara incorporates San Marzano tomatoes; fresh, not dehydrated carrots, garlic, Italian parsley, onions, and thyme; extra-virgin olive oil; and sea-salt. By contrast, Emeril’s (about $4) and Newman’s Own (less than $3) list tomato puree (water and tomato paste) as the first ingredient, as does Ragu. Emeril’s doesn’t specify whether its onions are fresh, but the label notes the garlic is powdered. The garlic and onions in Newman’s Own are dried.

The full results of Consumer Reports’ tests of celebrity brands are available in the October issue of the magazine, on sale September 6th and to subscribers of www.ConsumerReports.org.

There was an “Excellent” or “Very Good” pasta sauce to suit most tastes. Give first consideration to top-rated Giada de Laurentiis Tomato Basil, a buttery rich sauce sold only at Target. It costs $3 and is a CR Best Buy. Most consumers would not expect that sauce to come from a jar, CR’s testers concluded. Other sauces are expensive but worth a try. Mario Batali’s is the choice if you love garlic, Rao’s if you like it slightly spicy, and Paul Sorvino’s if you prefer a mild sauce that tastes mostly of tomatoes.

Among soups, Wolfgang Puck’s Tomato Basil Bisque was the standout: It was creamy, thick, and fresh-tasting. CR’s tasters weren’t impressed by any of the minestrone soups, even Puck’s, because most had mushy vegetables or pasta.

As for salad dressing, Rao’s was the best of the bunch, but Cardini’s was very good and was lower in fat than the rest. (Or, try making your own by blending fresh seasonings with a good olive oil and balsamic vinegar.)

With more than 7 million print and online subscribers, Consumer Reports is published by Consumers Union, the world’s largest independent, not-for-profit, product-testing organization. It conducts the most comprehensive auto-test program of any U.S. publication or Website and owns and operates a 327-acre Auto Test Center in Connecticut. The organization’s auto experts have decades of experience in driving, testing, and reporting on cars. To subscribe, consumers can call 1-800-234-1645 or visit www.ConsumerReports.org.