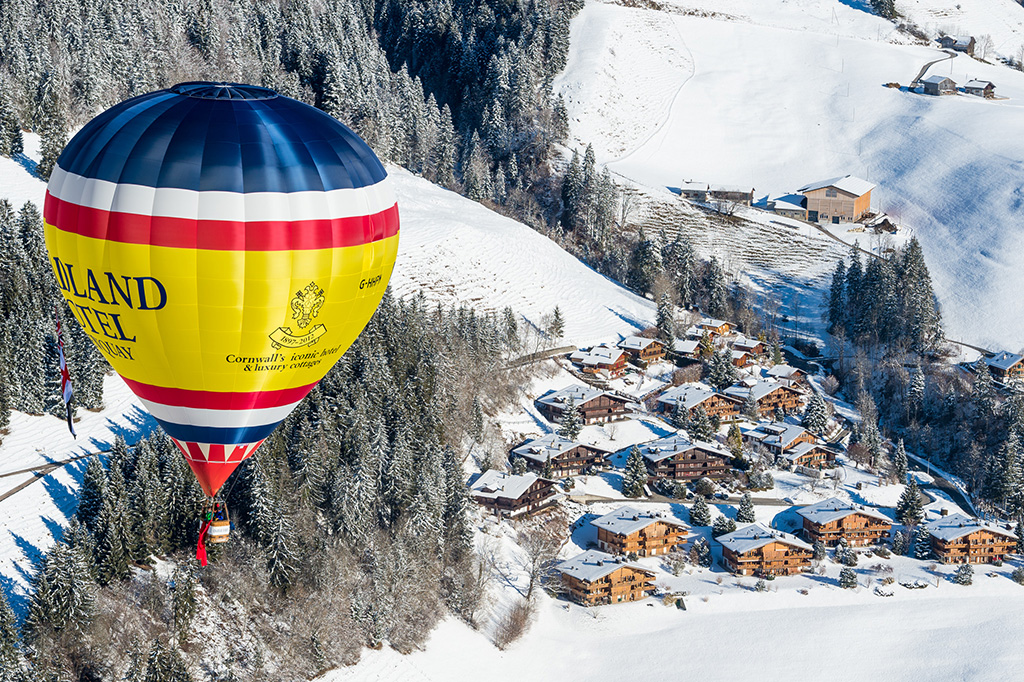 The 36th International Balloon Festival took place from January 25 through February 2nd, 2014. It came to an end on an immaculate white day, due to snowfall. More than 18,000 delighted spectators attended the Festival this year in a friendly ambiance, with good weather during the week. The Festival’s organizers are satisfied, in spite of unreliable weather that thwarted the weekend programs.

This year, no less than 80 pilots from 15 different countries enchanted festival-goers, who came to Château-d’Oex for this extraordinary aerial show. On the first weekend, during which opening day was bright and sunny, 10,000 people came to Château-d’Oex. As always, Children’s Day on Wednesday was a huge hit, with nearly 450 children enjoying a moored balloon flight. Nearly 3,000 people were present for the occasion. On the other days, the Festival welcomed more than 5,000 spectators. And so in all, the 2014 Festival attracted 18,000 visitors. The weather was especially fine on the weekdays, as it was on opening day as well. The organisers are very satisfied with the enthusiasm of the public on the weekdays of the Festival.

Several competitions took place this year. In particular, the Deux Gruyères Race was won for the first time in 5 years! The English pilot Richard Allen tossed his marker the closest to the target inside the courtyard of Castle of Gruyères. The Unknown Balloon Chase was won by David Spildooren from Belgium, who landed 1.50 m (5 ft) from his target. As for the Parmigiani target, four pilots tied for first place. Concerning the pole perched on Temple Hill, François Chappuis, piloting the Parmigiani Balloon, was the first to succeed in slipping his ring onto the pole. The second pilot to manage this feat was Charles Gourmet, a Belgian pilot and a regular at the International Balloon Festival.

2014 was a great year in terms of flights. The balloons took to the skies on 5 of the Festival’s 9 days. Indeed, the pilots clocked up more than 620 flight hours during the week. Thanks to exceptional weather conditions on Friday, the hot-air balloon pilots were able to fly at an altitude of 4,000 m (13’000 ft), and the most daring even went as far as the region of Fribourg and Bern.

The air shows performed by Jérôme Cusin in his aerobatic aircraft and Géraldine Fasnacht in her wingsuit, together with the demonstrations by paraglider pilots and skydivers, were also huge hits with the spectators. The balloon release and various fun events offered during the children’s afternoon delighted young and old alike.

The organizers of the International Balloon Festival would like to thank everyone who attended and all those who worked so hard to make a success of this event. The Festival looks forward to seeing everyone again in Château-d’Oex next year, from January 24 to February 1st, 2015. Night Glow is scheduled for Saturday, January 31!