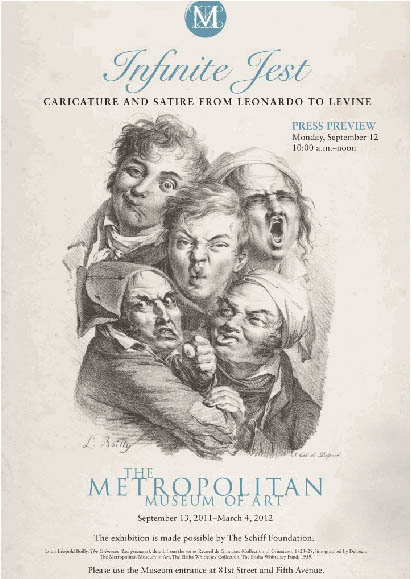 Infinite Jest: Caricature and Satire from Leonardo to Levine, on view at The Metropolitan Museum of Art September 13, 2011, through March 4, 2012, will explore humorous imagery from the Italian Renaissance to the present. Consisting mostly of works from the Metropolitan Museum’s rich collection in its Department of Drawings and Prints, the exhibition will include sheets by artists such as Leonardo da Vinci, Eugène Delacroix, Francisco de Goya, Henri de Toulouse-Lautrec, and Enrique Chagoya alongside works by artists more often associated with visual humor, such as James Gillray, Thomas Rowlandson, Honoré Daumier, Al Hirschfeld, and David Levine. Many of these engaging caricatures and satires have never been exhibited and are little known except to specialists.

The exhibition is made possible by The Schiff Foundation.

The exhibition’s title, Infinite Jest, derives from Hamlet. Shakespeare’s play is quoted in a Civil War print from the 1864 presidential campaign caricaturing Democratic candidate General George McClellan as Hamlet and his Republican opponent, President Abraham Lincoln, as the exhumed skull from the play’s gravedigger’s scene, using the famous line: “I knew him, Horatio; a fellow of infinite jest.”

The exhibition will be divided into four sections and will begin by exploring the building blocks of caricature, a genre that artists employed through the centuries, exaggerating faces and physiques, showing people as animals and objects, and displaying humorous figures in processions. In its purest form, caricature—from the Italian carico and caricare, “to load” and “exaggerate”—distorts human physical characteristics and can be combined with various kinds of satire to convey personal, social, or political meaning. Although caricature has probably existed since artists began to draw (ancient examples are known), the form took shape in Europe when Leonardo da Vinci’s drawings of grotesque heads were copied by followers and distributed as prints.

In the 17th century, Gian Lorenzo Bernini entertained European monarchs with caricatures, and the form was also taken up by Guercino, Pier Leone Ghezzi, and Giovanni Battista Tiepolo. Highlights of this section will include Leonardo da Vinci’sHead of a Man in Profile, Facing Left, together with caricature drawings by Tiepolo and Francois-André Vincent, as well as a rich range of prints by Louis Léopold Boilly, Thomas Rowlandson, James Gillray, and even Nadar, who was an active caricaturist.

The second section of the exhibition will examine social satire expressed in works devoted to eating and drinking, gambling, male and female fashion, art, and crowds. The 18th and 19th centuries are known as the golden age of lasix online caricature and satire, with William Hogarth, Gillray, Rowlandson, and George Cruikshank producing lively examples in Britain, and Honoré Daumier and Boilly doing the same in France. These artists cleverly inserted recognizable caricatures into satirical frameworks to mock contemporary society. Extreme fashion provided satirists with an ever-changing source of humor beginning in the 1760s and a selection of sartorial caricatures will be on view.

Politics will be the focus of the exhibition’s third section, featuring prints produced in response to the American and French revolutions, to Napoleon’s conquest of Europe, and to French, Mexican, and American politics of the 19th and early 20th centuries, including the American Civil War. Rare anonymous satires produced in France when censorship eased in the 1790s will be on view, accompanied by famous designs by Gillray and Daumier. Striking designs by such unexpected caricaturists as the French romantic painter Eugène Delacroix will also be included.

The exhibition will end with a group of caricatures of notable people from the 19th to the 21st century. Images in this section will include Al Hirschfeld’s Americans in Parisfrom 1951, depicting a lively crowd at the Café de la Paix that includes the Duke and Duchess of Windsor, the boxer Sugar Ray Robinson, Alice B. Toklas, Ernest Hemingway, General Dwight D. Eisenhower, and Hirschfeld himself with his wife, the actress Dolly Haas, and their young daughter Nina. The most recent piece in the exhibition will be Enrique Chagoya’s The Headache, A Print after George Cruikshankfrom 2010, in which Chagoya adapted an 19th-century print by Cruikshank called The Head Ache to include President Obama’s face as a statement about the country’s recent debates on health care. Infinite Jest is organized by Constance C. McPhee, Associate Curator, and Nadine M. Orenstein, Curator, both of the Metropolitan Museum’s Department of Drawings and Prints.

The exhibition will be accompanied by a fully illustrated catalogue written by Constance C. McPhee and Nadine M. Orenstein. It is published by The Metropolitan Museum of Art and Yale University Press, and will be available in the Museum’s book shops (hardcover, $45).

The catalogue is made possible by the Charles Bloom Foundation.

A variety of education programming will be offered in conjunction with the exhibition. Highlights include a Sunday at the Met program on October 16, gallery talks, films, and a teen program. Unless otherwise noted, all programs are free with Museum admission. Program details and more information about the exhibition can be found atwww.metmuseum.org.

Related Exhibition at the Metropolitan
In conjunction with the exhibition Infinite Jest: Caricature and Satire from Leonardo to Levine, an installation of recently acquired prints and drawings from the Metropolitan Museum’s collection will be on display in the Robert Wood Johnson, Jr. Gallery through January 9, 2012. This group will consist mostly of works of modern political satire by artists Robbie Conal, David Levine, and Pat Oliphant.

IPA Staff and other members of the legitimate media, see Press Invitation Below. 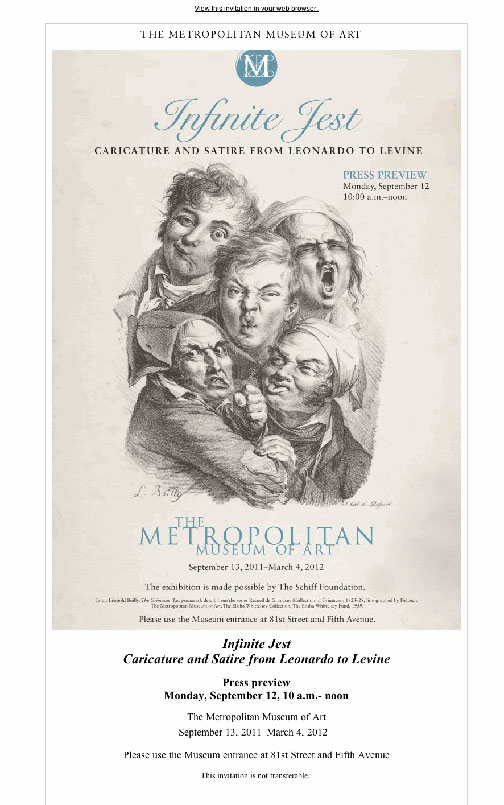