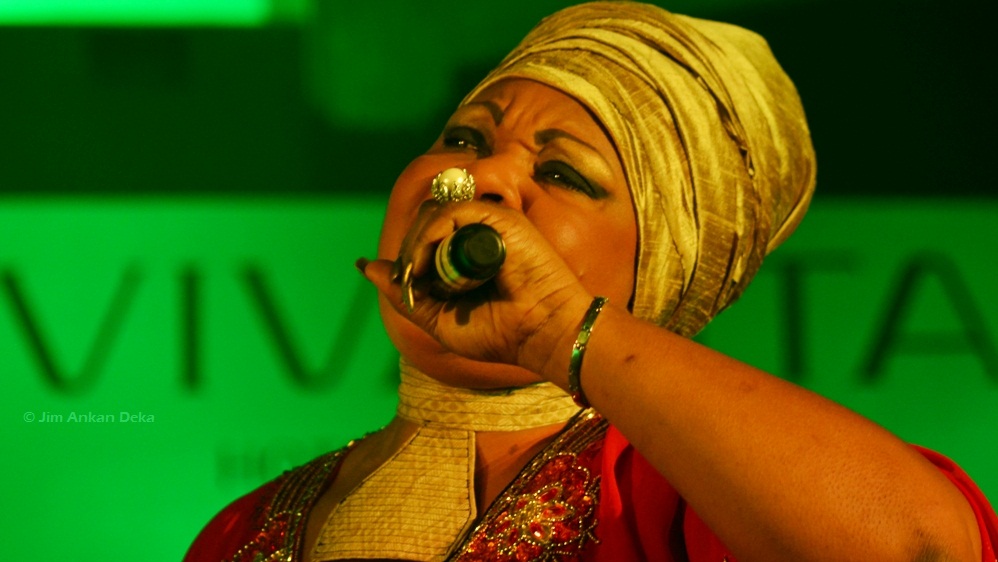 Deep Forest, the Grammy winning band from France recently performed at the Deep India Concert. The ‘Deep India concert’ is a brief musical tour to promote the project ‘Deep India’, a collaboration between Deep Forest from France and Indian santoor player Rahul Sharma. The venue Vivanta by Taj at MG Road, Bangalore in collaboration with Sony Music showcased this musical event.

The event was on the breezy evening of December 13, at Vivanta by Taj. Although it took almost half an hour for me and my friends to reach the venue, we did get a chance to check out the instruments of the band and binged on yummy tidbits, standing next to an open bar.

Deep Forest commenced the evening with some unflappable moony tracks. With David Fall on the drums, Alune Wade on the bass, Olyza Zamati – the vocalist, and the master himself Eric Mouquet on the keys (both on the keyboard and the laptop), the music of Deep Forest can easily be categorized as “ethno-introspective ambient world music”. Though I am not a big fan of trance/elctronica, I found myself swinging my head to the beats.

The highlight of the show has got to be the composition of Eric and Rahul called ‘Viva Madikere’, an ode to Madikere, a hill station town in Karnataka state. There’s an interesting story behind this song. It so happened that Indian ‘santoor’ player had recorded some drum beats, vocals and natural sound effects during his stay at Madikere and send them to Eric to get a flavor of the land. Inspired by the flavors of the place, Deep Forest worked on the song and named it ‘Viva Madikere’, which later paved way for the complete musical collaboration – Deep India. The audience were equally thrilled to groove to a Bihu song (traditional folk song of Assam) that Eric had fused with techno beats!

Deep Forest, comprising of Eric Mouquet and Michel Sanchez, was nominated for a Grammy Award for the first time in 1994 and won the award for the album ‘Boheme’ in 1995. The band is also the proud recipient of World Music Awards (’95) and MTV Awards Best Video (’93).

About ‘Deep India’, Eric says, “Sony Music asked me to listen to Rahul Sharma’s Santoor works; it’s a very beautiful instrument and Rahul’s a very good musician. It’s always easy to work with a good musician because we speak the same language. Our project is supported by Vivanta by Taj.”