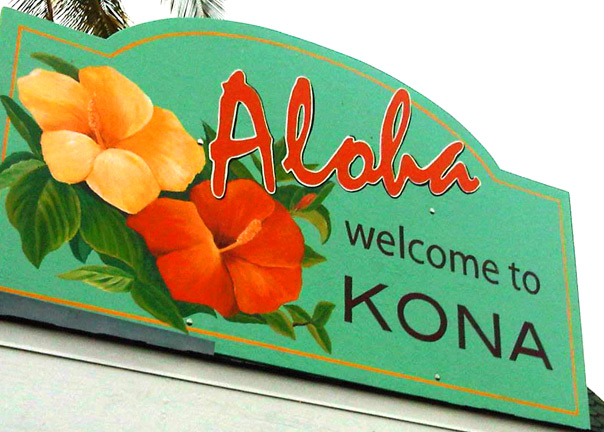 Breath in. Hold it. Breath out. This air is amongst the freshest on earth. Spread out one hundred feet below you is a miracle of nature, a green beach; in front of you the depths of the South Pacific. You’ve made the journey to Puu Mahana, the Green Beach in South Point Park on the island of Kona, Hawai’i. You are at the southernmost point in all of the United States.

Over one hundred years ago my family emigrated from Portugal to these Hawai’ian islands, Kona included. I’ve come to see Kona for myself and get a deeper appreciation for my own personal history. After a few days on the Kona side of the island we drove the Mamalahoa Hwy, route 11, around the southern tip on our way to Volcanoes National Park.

You will not happen to find Green Beach; you have to seek it out. After leaving Rt. 11 and joining S. Point Rd. you will drive across a green coastal plane of grass for twelve miles. We got to see grazing horses set against the ocean as background, incredible.

Making prior plans is paramount, as you’ll need a 4×4 or good hiking shoes and equipment to cover the final 6 miles to the beach. There are no facilities out here, including no water so come prepared. Do not attempt a visit in poor weather, as the area is prone to flooding and can be very dangerous.

Once you reach lands end take the fork to the left. You will find a parking lot here and your last touch of smooth travel. The final six miles along the coast is 4×4 territory, don’t even think about it otherwise. The driving is not too technical; most drivers should be able to navigate the web of dirt roads that all lead to the east and the beach. Rental agencies on Kona will specifically tell you that this trip is not allowed in their vehicle. That means if you do it and damage the vehicle, you could be in deep shit. I don’t really follow many rules, except the really big ones, so didn’t think twice. Just be aware of the choice you are making.

When we arrived at the beach we had it all to ourselves. A fair amount of red clay dust covered both the 4×4 and our bodies but the effort was immediately rewarded. As you stand at the top of the cliff leading down to the beach, you see a high cliff on the left side, a half crescent green beach made possible by olivine crystals, a blue protected bay and a lower cliff enclosure to the right. The contrast of dark earth, green beach and blue water is stark.

The hike down to the beach is easy to the right or western side of the beach, as there are rocks that present themselves as natural made steps. On the eastern side of the beach you have black sand embankments that are fun to play on but more difficult to navigate. Soon after we arrived a few others showed up and the fun really begun.

One of the new arrivals spied the high cliffs on the left side of the bay and decided he was going to jump. The point he was eyeing was over one hundred feet up and jutted out nicely taking away some danger from the drop. The ocean water below was deep. Almost as soon as he showed interest in jumping he started the hike. The earth and footing was tricky, I expect this was the most dangerous part. When he reached the point he arched up taking in all the adrenaline pulsing through his body and leaped. The stunt was breathtaking; I caught all of it. He arrived back on the beach to a crowd roaring with approval.

We remained at the beach for almost two hours. A few other people showed up and left a 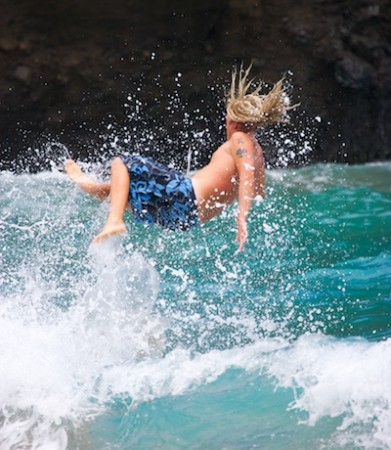 fter looking around. A few showed up with all the beach toys and made a day of it. We had fun watching a skim boarder wipe out on the waves over and over again. The water in the small harbor is safe to swim. Most strong swimmers can handle the undertow. If the ocean intimidates you, I wouldn’t recommend you enter. Once you leave the safety of the harbor the current increases exponentially, it will take you straight south to Antarctica, if you survive that long.

As you approach Kona and look out the airplane window you know you are in for a unique experience. The black lava fields and mountains that blank out the sky are things you don’t see everyday. Whether it’s the fertile land of Kona, the green beach of South Point Park, or the lush plants and wet climate of Volcanoes, Kona will manage to fascinate you at every turn.