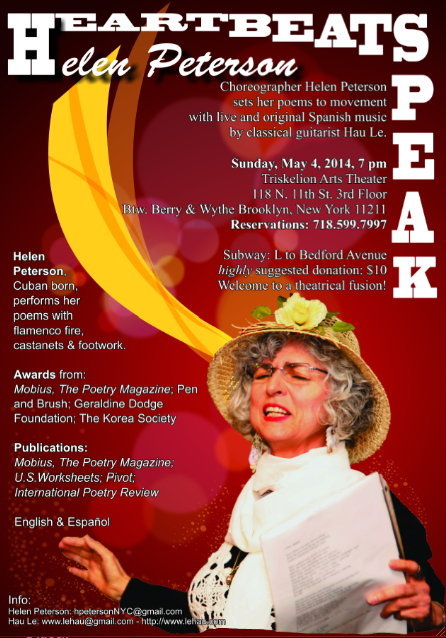 [dropcap]H[/dropcap]elen Peterson, dynamic choreographer and poet, will perform HEARTBEATS SPEAK, her original creation of poetry-dance fusion in concert at the Triskelion Arts Theater in Brooklyn, NY, on Sunday, May 4th, 2014. Helen’s unique performance pieces move, intrigue and delight her audiences by very artistically bridging the music of poetry and Spanish Flamenco dance. As a native Cuban born into a theatrical family, Helen’s rich, colorful performances of poetry with dance embody her vibrant heritage, early dreams, artistic and life experiences, and politics as well as her extensive training. With her own unique Flamenco style, bold, earthy realities and graceful, sophisticated flare, she enthralls her audiences, transporting them through her vividly depicted and enacted expressions. Her ardent and elegant voice and movements sculpt shining revelations of her ongoing involvement with the strong and subtle experiential emotions of life. Her unique, artful, kinetic flow of words over dancing rhythms of castanets and drumming feet emphasize the strong, yet graceful empowerment of a fine artist’s poetic vision sung from the heart and soul.

[box_light]Helen Reveals Her Creative Philosophy, Process and Focus as Poet and Choreographer-Performer[/box_light]

As choreographer, poet and dancer, Helen creates concerts that artistically merge poetry’s music with rhythms and dance. When discussing her poem, “Excavation,” Helen states that it conveys “. . . the skeleton of a poem . . . pipes and whistles as it sings/ . . . conducts an orchestra of words.” Helen explains that another poem she composed expresses, “Writing a poem is like taking the time . . . to find . . . inner light . . . and . . . inner peace flowing.”

Beginning the creative process, Helen composes a poem as she hears and experiences it in Spanish, her first language, or in English. She then translates the poem, immersing herself in all levels of its motif and meaning, spring-dancing to newborn tonalities, sensibilities, language, word patterns and syntax. She tells us that she determines and gives full expression to each poem by enacting its voice and body movement. The poetic piece then comes alive in totality as she accentuates rhythms and fine-tunes the emotional gradations by use of accompaniment as recorded or live music. Some Spanish Classical selections are composed for her poetry and played live by accomplished guitarist-composer Hau Le.

As creator and performer of her poetry theater concerts, Helen’s major focus is on performing artistic poetry and dance fusion pieces set to music onstage in theatrical venues. Helen reveals that her performance experience with “Hydrogen Jukebox” enlivened the theatrical flare of her recitation while empowering her to continue her creative dance. As she performed, the compelling artistry of her unique dramatic expressions evoked increasing audience responses of enthusiastic applause and cries of “Ole!” As Helen reveals, classics such as Isaac Albeniz’s “Asturias” and “Romanza” also highlight and punctuate rhythmic understructures in her poems. Hau Le’s original orchestral composition based on Helen’s poem, “Spanish Gifts,” engages and excites with a majesty that Helen dances as she recites for its ultimate performance in a theatrical setting.

In performance, Helen’s mission is the direct conveyance of sheer truth to her audience with radiant elegance, grace and beauty. As she touches more people’s inner spirits and vital essence with her poetry theater performances, her intent is that their souls may feel in universal harmony with her own soul’s music. Helen’s focus as both performance artist and educator is on bridging existing gaps between different cultures and generations. She constantly reaches out through her creative performances to inspire and ignite growing appreciation for Spanish roots and culture as she preserves rich Spanish artistic traditions via her vibrant Poetry Theater.

Helen’s primary goal in her poetry-dance fusion is to educate, enlighten and intrigue more worldwide audiences with her unique mix of Flamenco and Cuban-American artistic, cultural and lifestyle influences. By making more contacts and performing to growing audience interest and response, she plans to expand her performance arena and cultural influence as a professional fusion artist who creates, performs and teaches. As she continues her stage performances in collaboration with musicians, they will market their DVD and CD recordings along with Helen’s translation of Flamenco Deep Song to further enhance understanding and appreciation of Poetry-Dance Theater.

As an accomplished choreographer and performer of poetry-dance with Flamenco-influenced music and song, Helen relies on her earlier professional experience as Flamenco dancer, “Esmeralda” in international concert performances in widespread locations including Panama, Spain, the United States and Canada. She adds fiery spark and spirit to her poetry and dance with castanets, tambourine and drumming footwork, all providing rhythmic emotions. Helen skillfully combines her Flamenco vocal training with her Cante Jondo (Deep Song), lending Moorish qualities with both voice and music.

As an international poet, choreographer and performer, Helen Peterson first studied ballet, followed by training with acclaimed Flamenco and Classical Spanish dancers, including:

•   Las Cuevas de Sacromonte-Granada, Spain, where she performed with the gypsy dancers

She acquired vocal techniques through studies with renowned Flamenco singers, Rafael Romero of Madrid, Manuel Gogo of Andalucia and Alfonso Cid of Sevilla.

Helen also earned an A.B.D. in Linguistics and Anthropology at CUNY Graduate Center in combination with Columbia University in New York City. Her dissertation topic was, Using Diphthongs to Detect the Direction of Change in the Evolution of Vowel Systems. She also holds an M.A. degree in TESOL from Hunter College in New York City, and her Master’s Degree thesis was entitled, A Curriculum for Teaching College Composition to Students of English as a Second Language. Helen received her B.A. degree in Linguistics and Mathematics from City College in New York, NY.

Major performances by Helen Peterson include the following:

Helen Peterson has been publishing her poetry since the 1970s and won a major award from Mobius, The Poetry Magazine in 2012. Helen revealed that the 2013 Make Music New York Festival introduced a new direction for her poetry theater. She is quoted as saying, “This festival has really catapulted my inspiration into providing more of my poems with music.” And the rest is pure, artistic vision and enlightenment through her unique, dynamic and empowering poetry-dance and music fusion. Helen’s Poetry Theater concerts continue to enthrall, educate and inspire her audiences in performance venues around the globe. Experience the creative magic and genius of Helen’s next performance on Sunday, May 4th at the following venue:

HEARTBEATS SPEAK – Helen Peterson choreographs and performs her own poems. In the video excerpt, Helen performs with live accompaniment by Classical Guitarist and composer, Hau Le. By connecting Hispanic roots through the ancient art of Flamenco in modern fusion with poetry, dance and music, join us to celebrate the Mexican-American pride of Cinco de Mayo.

YOUR COMMENTS ARE WELCOME, By The Theater Program For The Artists After Each Of A Variety Of Performances.

Ellen Gilmer Author
Ellen L Gilmer is a writer-composer and performance artist who lives in New York City. She is the author of two books published in England, ‘La Belle Famille,’ a novel, and ‘Free Style Run of the Heart,’ a book of dramatic monologues with songs. These books were published by The Pentland Press Ltd and Carnegie Publishing Ltd. Ellen’s third book, ‘Song Poems from the Cumulus Cloud and Creative Essays,’ was published by Create Space, an Amazon company. She is also an active KDP Amazon publisher (for Kindle books). As an IPA member for many years, Ellen has now joined the IMPress staff to share her writing talents with our readers.
web
https://writers.work/ellenlgilmer
×

Ellen Gilmer Author
Ellen L Gilmer is a writer-composer and performance artist who lives in New York City. She is the author of two books published in England, ‘La Belle Famille,’ a novel, and ‘Free Style Run of the Heart,’ a book of dramatic monologues with songs. These books were published by The Pentland Press Ltd and Carnegie Publishing Ltd. Ellen’s third book, ‘Song Poems from the Cumulus Cloud and Creative Essays,’ was published by Create Space, an Amazon company. She is also an active KDP Amazon publisher (for Kindle books). As an IPA member for many years, Ellen has now joined the IMPress staff to share her writing talents with our readers.
web
https://writers.work/ellenlgilmer
Latest Posts