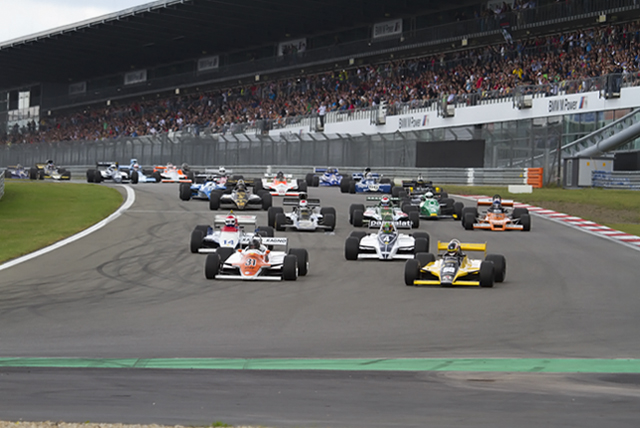 As mentioned in an article I’ve published earlier on IPA historic racing is very popular nowadays. In Europe four big events lighten up the yearly historic motorsports calendar. Amongst them is the legendary Oldtimer Grand Prix, held on the Nürburgring. More than 53.000 spectators found their way to the Nürburgring where the Automobilclub von Deutschland (AvD), Germany’s oldest automobile club organised the 41st edition of the Oldtimer Grand Prix. Over the weekend more than 500 historic race cars from the past nine decades could be seen in action such as Formula 1 cars, historic Grand Prix cars, Formula Junior single seaters, touring cars and GT´s. Two special highlights marked the event, the 90th anniversary of the Le Mans 24 Hours as well as the Stefal Bellof Tribute. Stefan Bellof was one of Germany´s greatest racing drivers from the eighties probably best known for his record lap driving a Rothmans Porsche 956 on the legendary Nordschleife in a stunning time 6 mins 11.13 seconds. Bellof won the World Sportscar Championship in 1984. In 1984 and 1985 he competed with the Tyrrell F1 team. Stefan Bellof was tragically killed in an accident during the 1985 1000 km of Spa.

Located about 70 km south of the German town Cologne you can find the Nürburgring, a motorsports complex around the village of Nürburg, featuring a Grand Prix race track built in 1984 as well as the legendary “Nordschleife” or North loop which was built in the 1920s.

The Nordschleife is 20.8 km long nicknamed “The Green Hell” by former F1 world champion Jackie Stewart. To create the Grand Prix track the start and finish area was demolished between 1982 and 1983. The new track has been used since 1984 for the German F1 Grand Prix as well as other major national and international events. The Nordschleife is still in use for racing, such as the Nürburgring 24 Hours race as well as testing and public access.

The AvD managed to get a large amount of race cars on the track that participated in races between the fourties end eighties, from a historic grand prix car, a sports car, touring car or GT to a Formula 1 car. Besides an action packed racing programme divided over Friday, Saturday and Sunday, spectators could als enjoy demonstrations from German car manufacturers BMW and Opel. One of the largest field of racing cars over the weekend was produced by the FIA Lurani Trophy for Formula Junior Cars. The Lurani Trophy is for original Formula Junior cars built between 1958 and 1960 (Period E) and between 1961 and 1963 (Period F). Cars that want to participate in the Lurani Trophy must have been constructed in period to the specification of FIA Formula Junior. Divided into 9 different categories 38 historic single seaters equipped with tiny 1000-1100 cc engines or less found their way to the track.

Formula 1 cars up to 1983 in period livery are gathered into the FIA Masters Historic F1 Championship. Fans of classic F1 cars could eat their hearts out with a full grid of no less than 24 single seaters from the golden era of Formula 1. Legendary names as Lotus, Brabham, Surtees, Tyrrell and McLaren appeared on the entry list treating the vast crowd with two spectacular sixteen laps races.

The Revival of the Deutsche Rennsportmeisterschaft (DRM) 1972-1981 is one of the races that pleases the crowds year after year. Especially the final years of the former championship saw true beasts participate with Group 5 cars such as the Porsche 935, BMW M1 Turbo etc. The 41st edition of the Oldtimer Grand Prix saw no less than 33 legendary GT´s and touring cars. The DRM or German Racing Championship was a touring and sportscar racing championship, regards as the predecessor of the current DTM championship. Originally the championship started in 1972 open to Group 2 touring cars and Group 4 GTs. From 1977 the legendary Group 5 cars were allowed. As 1985 proved to be the final year the championship was renamed as Deutsche Sportwagen Meisterschaft.

Two-seat race cars and GTs, built before 1960 and 1961 entertained the crowd on two occasions. On Saturday, theses series closed the programma with an 60 minute evening race. On Sunday a thirty minute race was scheduled including a classic Le Mans start. No less than 46 iconic cars filled the grid including Jaguar C-Type, Ferrari 250GT, Aston Martin DB4, different Lola´s just to name a few. Historic Grand Prix Cars, gathered into the British HGPCA, managed to get 31 cars to the Eifel track featuring some stunning beauties like the Scarab Offenhauser, Lotus 16, Ferrari Dino, Maserati 250 etc. The Historic Grand Prix Cars Association was formed in 1979 by a group of leading historic racing enthusiasts with cars from the 1920s to the 1960s.

Another highlight over the weekend was the BMW race first to celebrate the 40th anniversary of the legendary BMW 3.0 CSL. The unique race was open to all BMW´s developed by BMW Motorsport GmbH between 1970 and 1990. Furthermore Le Mans-style sports cars up to 1974 the FIA Masters Historic Sports Car Championship were present and true oldies from the Pre 1940 Pre War and Vintage Sports Car Trophy. As always the Oldtimer Grand Prix proved to be a great event and not only for historic racing die-hards.