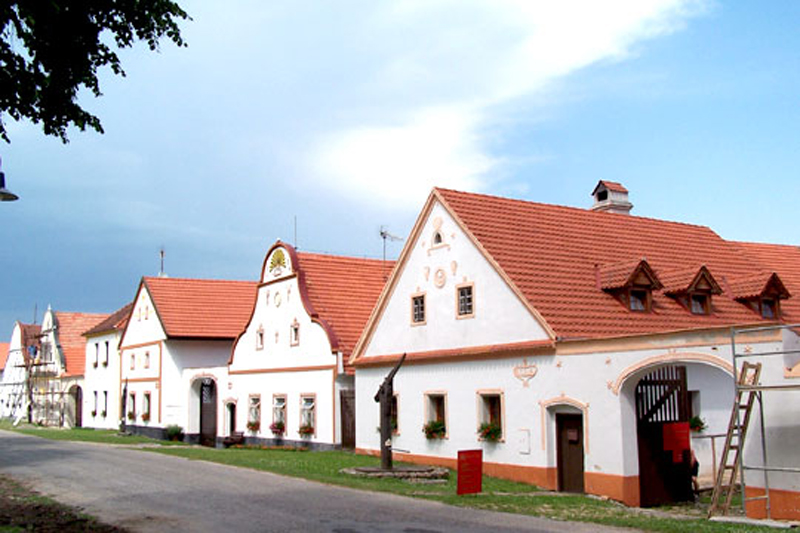 [dropcap]T[/dropcap]ucked away off a narrow country roadway in the Czech Republic’s South Bohemia region sits a tiny well-preserved village. The entire village! Rows of gabled white houses, some in various stages of renovation, line each side of the village green of this charming medieval town. Behind tall gates are barns, most having now been transformed into modern day garages. Each uniquely styled home is similar yet different maintaining authentic details of the past as they undergo their exterior facelifts.

Holasovice, situated 15 km west of Ceske Budajovice, is a picturesque village that can be traced back to 1292. The entire village – something very rare – is a well-preserved example of a traditional central European community encompassing an 18-19th century architectural style known as South Bohemian Folk Baroque. The village also preserves a “ground plan” dating from the Middle Ages.

Visiting historical destinations is one of the fastest growing activities for U.S. leisure travelers. What’s more, according to America’s National Trust for Historic Preservation, historic preservation is an important component of authentic destinations and experiences. And since American travelers extend their sojourns to overseas historic sites as well, it’s no surprise that I have sought out this UNESCO-listed world heritage site while traveling through the Czech Republic. 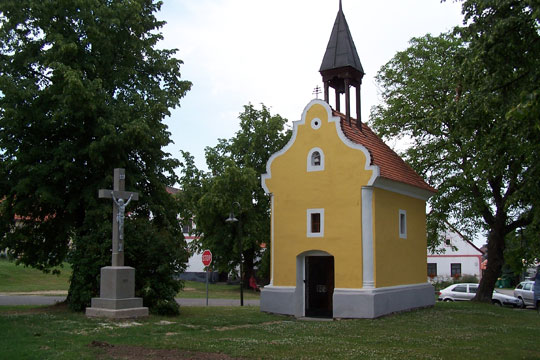 A mustard yellow chapel dwarfed by a thin wooden maypole stretching skyward, punctuated by lush green grass and a pond set against today’s backdrop of incoming navy blue storm clouds and warm summer temperatures, define Holasovice as we make a left-hand turn into the peaceful rural village of 140 inhabitants.

In Europe, May Day (May 1) has traditionally been observed with celebrations extending back to pre-Christian Europe. May 1 was the first day of summer, while the summer solstice on June 21 was “midsummer”. May Day might be best known for its tradition of dancing around the maypole.

Erected each spring, maypoles are tall wooden poles with several long colored ribbons streaming from the top. On May Day, village children would dance around the town’s maypole weaving multi-colored ribbons in and out creating striking patterns. That tradition continues today in the Czech Republic.

Appearing deserted other than a handful of skilled laborers balancing on scaffolds as they painstakingly perform their high quality detail work on three houses in a row, there is no other indication of life. No children playing, no animals roaming about, and no automobiles snaking out of driveways. This sleepy village appears deserted. 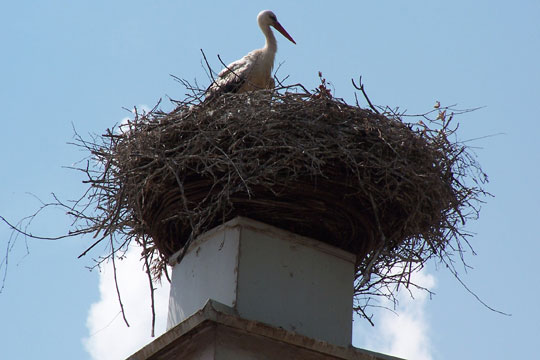 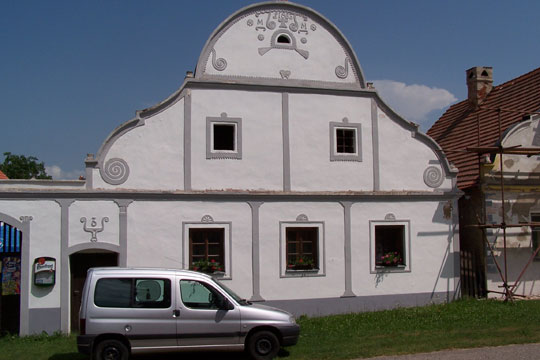 Its rustic baroque 19th century architectural style is characterized by varying shades of white and cream colored facades with interesting gables and white plaster art ornamentation. Beneath their stucco exterior lies stone. In the Czech Republic, most stone structures and brick buildings are stucco’ed to help preserve them longer. The smoothly rounded, impressively shaped facades of the homesteads are what designate their baroque classification. They are called folk because this is a rural area and thus a rural architectural style.

Strong encircling stucco walls and wooden gates tightly embrace as they join homesteads together along with a shared barn at the property’s rear, an example of traditional rural settlements of central Europe.

Historians liken the unique architecture to the South Bohemian countryside. Outlines of the homes, they claim, appear to copy the roundish shapes of the surrounding landscape with numerous elements of nature represented on gables between windows, and on front entrances and gates.

Historically, the individual homestead fronts are more than 30 meters deep and connect into one unit with the granary at back. This original layout – another reason why this village earned a place on the UNESCO World Heritage list in 1998 – consists of a long middle hall that connected the house to stables and sheds at the rear without needing to venture outside. In other words, the barn at the rear center of the property is jointly connected to respective sheds and a house on either side. 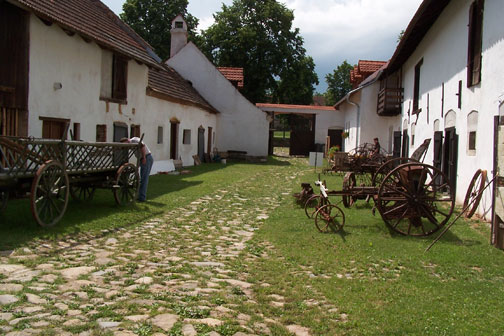 The yard was enclosed by a large barn centered in back with doors at the front and back allowing farmers to pass directly through with their animals and primitive farming equipment into the fields. This Gothic ground plan remains intact.

Each July, this old-time village comes alive with its annual two-day fair. The 10th annual celebration was marked in 2006. Festivities typically include music and traditional dance performances, theater productions, horse rides, jugglers, and national handicrafts for sale that are hand made by artisans from Bohemia, Moravia and Slovakia.

This miniscule jewel well hidden among the surrounding flat countryside of grain- yielding fields was a welcome surprise. Holasovice’s preservation has kept the charm of its simple past intact… tantamount to its image from the canvas of history.