John Bonham was born on May 31, 1948 in Redditch, Worcestershire, England. He was known for his powerful drumming and as a member of the band Led Zeppelin. Bonham used the longest and heaviest sticks available, which he referred to as “trees”. His hard hitting style was displayed to great effect on many Led Zeppelin songs, including “Immigrant Song” (Led Zeppelin III), “When the Levee Breaks” (Led Zeppelin IV), “Kashmir” (Physical Graffiti), “The Ocean” (Houses of the Holy) etc. He first learned to play drums at the age of five but never took any proper drum lessons.

In 1964, Bonham joined his first band, ‘Terry Webb and the Spiders’. He also played in other bands such as ‘The Nicky James Movement’, ‘The Blue Star Trio’, and ‘The Senators’. The Senators, released a moderately successful single “She’s a Mod”. Two years later, he joined ‘A Way of Life’, but the band soon became inactive. Later he joined a blues group called ‘Crawling King Snakes’ whose lead singer was a young Robert Plant. In 1967, Plant decided to form ‘Band of Joy’ where Bonham was the first choice as a drummer. At the same time Bonham was getting famous as a ‘Rock Drummer’ and was formally invited by the famous American singer Tim Rose as a drummer for his band. 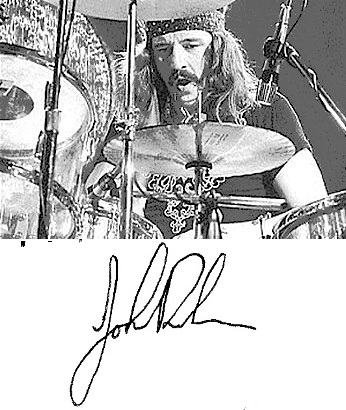 ll these while, Bonham was working for his father Jack Bonham as an apprentice carpenter. But Tim Rose’s offer gave him a regular income. Ultimately in July 1968, Jimmy Page (vocalist of Led Zeppelin) and manager Peter Grant selected Bonham to be the perfect fit as a drummer for the band Led Zeppelin. Although Bonham was receiving lucrative offers from established artists like Joe Cocker and Chris Farlowe, he decided to accept Grant’s offer.

Bonham is also credited with the first in-concert use of ‘electronic timpani drum synthesizers’. His famous drum solo ‘Moby Dick’ would often last for half an hour and regularly featured his use of bare hands to achieve different sound effects. In Led Zeppelin concert tours after 1969, Bonham would expand his basic kit to include congas, orchestral timpani, and a symphonic gong. While with Led Zeppelin, Bonham also found time to play on sessions for other artists. In 1969 Bonham appeared on ‘The Family Dogg’s’ ‘A Way of Life’, with Page and Jones. In 1970, he sessioned for Screaming Lord Sutch on his album ‘Lord Sutch’ and ‘Heavy Friends’. He played drums on Lulu’s 1971 song “Everybody Clap,” originally written by Maurice Gibb and Billy Lawrie. Later in his career, Bonham drummed for his friend, Roy Wood, on his 1979 album, ‘On the Road Again’, and for Paul McCartney’s ‘Wings’ on their ‘Back to the Egg’ Rockestra project.

On September 26, 1980, John Bonham was found dead in Page’s house ‘The Old Mill House’ in Clewer, Windsor. Weeks later at the coroner’s inquest, it emerged that in the 24 hours before he died, John Bonham had drunk forty measures of vodka which resulted in pulmonary edema – water logging of the lungs caused by inhalation of vomit. It was an accidental death. The alcoholism that had plagued the drummer since his earliest days with the band, ultimately led to his death. Despite media rumors, the remaining members decided to disband Led Zeppelin after Bonham’s death.