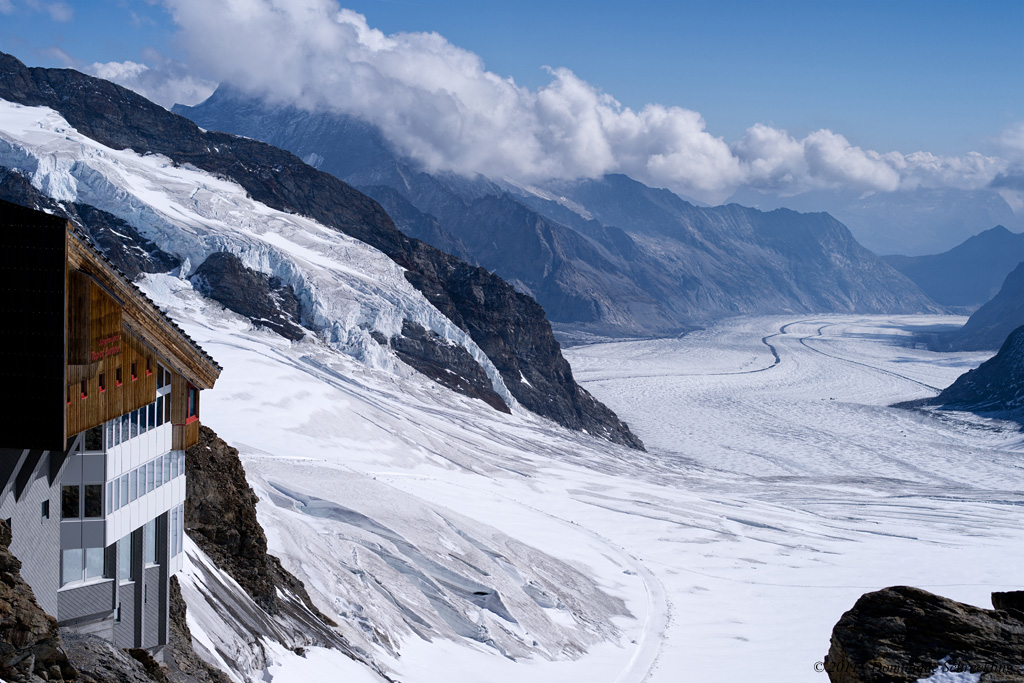 [dropcap]T[/dropcap]he Jungfraujoch is certainly among the highlights for every visitor to Switzerland. It is a mountain pass situated at 3’471 m (11’388 ft) between the Mönch Mountain at 4’107 m (13’474 ft) and the Jungfrau Mountain at 4’158m (13’642 ft) in the Bernese Alps which are in the Swiss cantons of Bern and Valais. The Jungfraujoch belongs to the UNESCO Natural World Heritage Site of Jungfrau – Aletsch – Bietschhorn.

Today, the Jungfraujoch is easily reached thanks to the Jungfrau Railway. Known as The Top of Europe, The Jungfraujoch is the Continent’s highest altitude railway station and offers visitors a magnificent alpine experience which is found nowhere else in Europe: a mix of glacial ice, snow, Swiss rugged alpine rocks and alps.

History of the Jungfrau Railway

In the late 19th century, railway fever seized the whole of Switzerland. Plans emerged to build railways across the country as well as to the tops of various Swiss alpine summits. The Jungfrau region made no exception to this trend. In October 1889, Maurice Köchlin, an engineer working with Gustave Eiffel, was the first to submit a project to the Swiss Federal Council for the construction of a railway to the Jungfrau summit. In 1891 the project was approved by the Swiss parliament but not carried out.

In December 1893 Adolf Guyer-Zeller applied for a concession for his Jungfrau Railway project from Kleine Scheidegg to the Jungfrau which was approved by the Swiss Parliament in December 1894. The construction started in July 1896. After two years of intensive manual labor, a section of the first two kilometers between the Kleine Scheidegg and the Eigergletscher was opened. The Eigerwand (Eiger Wall) station was opened in June 1903 which was followed two years later by the opening of the section to the Eismeer (Sea of Ice) station.

The construction of the Jungfrau Railway was estimated to take seven years. The workforce was located at the northern edge of the Eiger Glacier and consisted of up to 300 workers who were accommodated in houses and barracks. During winter, the workers in the “Sea of Ice” area were cut off from the outside world necessitating an advance delivery of provisions in the autumn. Perishable goods were preserved in the crevasses of the Eiger Glacier. It was decided to make the Jungfraujoch (the mountain pass) the railway terminus instead of the Jungfrau summit. On August 1st 1912, 16 years after construction began, the first train finally travelled the 9.34km (5.8 mile) long stretch from the Kleine Scheidegg to the Jungfraujoch.
This amazing feat has never been duplicated. The Centenary of the Jungfrau Railway will take place in 2012.

What awaits the visitor to the Jungfraujoch

From the railway station, the visitor is just a few hundred meters away from a fantastic view on the two Alps, the Mönch and the Jungfrau as well as on the 22km (13.6 mile) long Aletsch Glacier. The view from The Top of Europe on clear days can even extend as far as the French Vosges Mountains or the German Black Forest.

On top of the Jungfraujoch is the Sphinx observatory which combines a scientific research center, a weather station as well as a glazed window sightseeing hall allowing the best possible view even when it is cold and windy outside.

The Ice Palace is another fascinating place appreciated by the visitors to the Jungfraujoch. Tunnels have been carved inside the Glacier featuring a collection of ice sculptures.

My recent visit to the Top of Europe

Living not too far away from the Jungfrau area, I can wait until I have the best possible weather conditions for a day trip to the Jungfraujoch. Such a day was on Saturday, September 24th. The weather forecast announced a bright sunny early autumn day with excellent visibility in the Alps.

I left the Kleine Scheidegg station on the Jungfrau Railway going towards the Jungfraujoch summit at 10:00am. On the way up, the train stopped for 5 minutes at the Eiger Wall station where the passengers could enjoy a beautiful view down on the charming village of Grindelwald from the wall of the Eiger mountain which is known worldwide for its “North Face” mountain climbing challenges. The train stopped for another 5 minutes at Sea of Ice to allow a first look at the impressive world of eternal glacial ice. At 10:50, I reached the Jungfraujoch train station.
The fastest elevator in Switzerland took all of us from the train station to the Sphinx Observatory where we had an absolutely outstanding view under a deep blue sky over the surrounding snow capped and ice covered Swiss Alps highlighting the Aletsch Glacier. As predicted, the weather was surprisingly mild for this high altitude at this time of year.

The sunny skies invited all of us visitors to the outside viewing area to experience this magical world of eternal ice. Some Japanese and Indian tourists engaged in a playful snowball fight in the picturesque surroundings. Then most of us took a well-groomed and inviting snow trail for a 45-minute walk around the Mönch Alp to the Mönchsjoch hut.

The weather was spectacular, especially for photography. It helps a lot when one’s fingers are not immediately frozen when taking them out of the pockets which is the usual case at this altitude. In such unusually clear and mild conditions, I did not hesitate a minute to take the walk. At the Mönchsjoch hut, I enjoyed a delicious lunch which is a most popular Swiss recipe; croûte au fromage.

It consists of melted Alpine Swiss cheese over toasted bread with garlic, a slice of ham and then covered with a fried egg. The meal is a bit on the expensive side, but then, all of the food here needs to be brought to the hut from the valley below by helicopter. After lunch I took the trail back and shot some more photos of the Top of Europe which has been made possible by the hearty Swiss and Italian laborers in the 19th and early 20th century. We passed over a large impressive crevasse which showed the Jungfraujoch visitors that the alpine foot path goes right across a glacier; a rare opportunity indeed for most travelers.

There are many more photos here