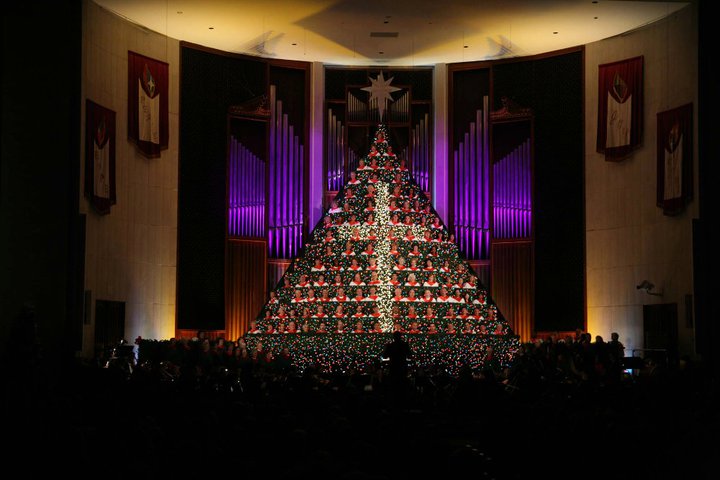 This year marked the 27th annual performance of the The Living Christmas Tree. The performance brings the story of Christ in such away that it is alive in music and dance like you’ll never see again. This year’s theme, “My Heart Shall Sing of the Day You Bring” was absolutely astounding. The performance was directed by Billy Orton, the Minister of Music and Worship at First Baptist Church. The message is centered upon God’s incarnate presence in Jesus Christ.

As the lights were dimmed, this thrill of the anticipation filled the sanctuary. Beautiful sounds filled the air and you could feel the excitement in just hearing the comfort in the familiar holiday hymns that were gloriously echoed across our ears and hearts.

There are numerous performances each year and there are two more left. The last Sunday’s of the performances  contains special abbreviated version geared especially for young children, and the evening performance features a special interpretation into American Sing Language for the hearing imparted.

The musical team is made up of well over 200 singers and instrumentalists and many technical staff as well. And without the hundreds of other volunteers it makes preparation smoother and allows the entire production seem to flow flawlessly.

This year’s performance was especially delightful as special guest, SFC Alvy Powell performed several solos. His bass baritone voice has won acclamations in performing in the United States and abroad, both as a soloist with the U.S. Army Chorus and in independent vocal performances.

In his work with the U.S. Army Chorus, he first came to national prominence singing “The Star Spangled Banner” at the inauguration of President George W. Bush, and was featured at the 60th wedding anniversary of George and Barbara Bush at the White House. Being a favorite of the Ford family, he was requested to sing for the funerals of President Gerald R. Ford and First Lady Betty Ford.

Alvy has become one of the world’s best-known interpreters of Gershwin’s Porgy and has performed in major baritone roles in Le Nozze di Figaro, Madame Butterfly, La Bohème, and other operas. He has sung with the Sanctuary Choir on two previous occasions and he as also sung at First Baptist Church in Huntsville previously.

We wish continued success with this notable event because it is a wonderful way to experience a real live singing Christmas tree resounding the message of Christ.

Here are some highlights from the event here

Sheila Stewart reporting for The Synergy at http://thesynergy.com