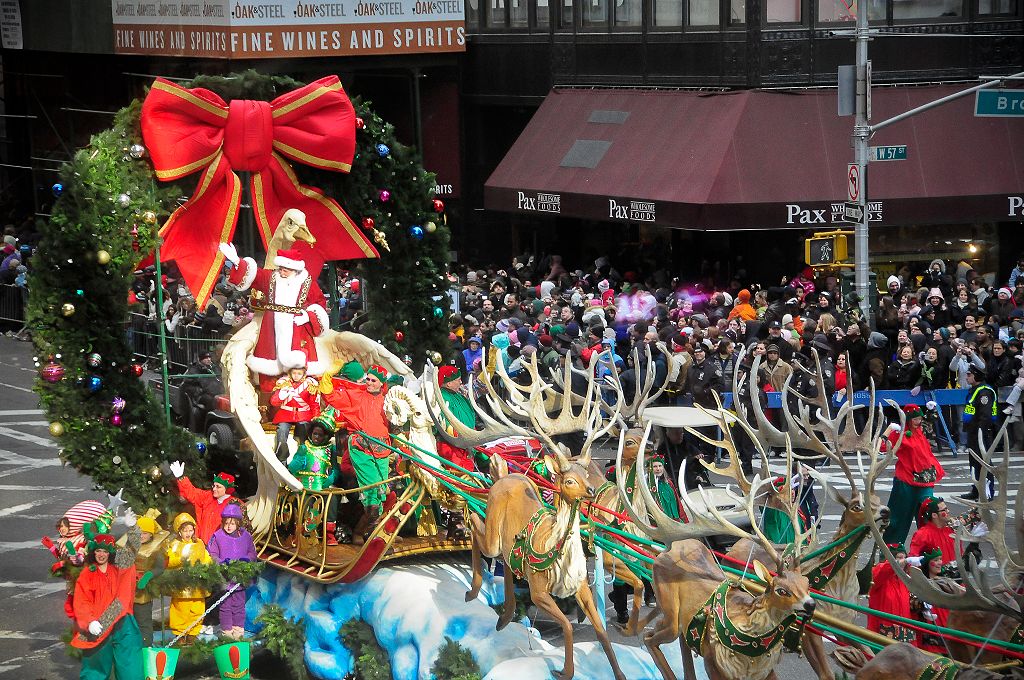 I have attended the Macy’s Thanksgiving Day Parade as far back as the mid 1970’s when I was so much younger.  We would pack up the family, my wife and three sons and head for New York to see the parade.  In 1987 I owned a company called Movie Tee’s and produced movie related tee shirts. We had an office/apartment on the corner of 37th Street and Ave. of Americas (6th Avenue), just a couple of blocks away from Macy’s Herald Square. Our office had a nice balcony with a view of Broadway from our windows and a clear view of the parade.

At that time, the parade traveled down Broadway, now the route has changed to Ave. of Americas, because of all the changes in the Times Square area. You can see from one of my early photos that Ronald McDonald was one of the stars at that parade.  Today it is Little Kitty, Kermit, Energizer Bunny and others. You can see the photo I shot of the Betty Boop balloon in 1987, one of the crowds favorites back then.

But today, my job is to cover events for our online magazine IMPress.  I cover most of the major trade and consumer shows as the Javits Convention Center and select parades and events in New York City.

The day of the parade turned out to be a beautiful but cold day and I decided to get up bright and early 3 AM to be exact, and head for the city to capture some of the excitement at this years Macy’s Thanksgiving Day Parade.

I try to cover a lot of these events but it is so difficult to obtain the right vantage point for my photos. This year I got smart and invited a few of our staff members to join me so we would have a better shot at getting what we needed. We had a couple of our guys on the streets for the parade so we could cover the parade from various spots along the parade route.

The parade started at 9 AM at  77th Street and Central Park West and would of course end at Macy’s on Herald Square.  Because we all had our IPA Press ID it was a bit easier for us to maneuver through the crowds with our cameras in hand.

The parade this year was going to travel down 6th Ave also known as Avenue of the Americas, but we wanted to avoid the 34 to 38th street areas and the Grandstand area on Columbus Circle, they are closed to the general public and are usually a mess.

The weather was a bit iffy this year with strong winds projected and the concern was for the balloons and their handlers, but as it turned out, it wasn’t as bad as forecasted and the temperature was in the mid 40’s so all was well with no mishaps on the parade route.

If you are looking for a good spot next year then I would suggest doing as we did and getting up early and head for the Central Park West area the further away from Macy’s the better.

The parade as always was worth the trouble getting into the city, parking (we were fortunate we have NYP Press plates) and then finding just the right spot that would give us a clear shot of the participants, floats and the balloons.  The police did a wonderful job this year in crowd control, thousands of visitors to watch, control and direct is not an easy job.   We felt comfortable and safe at the parade because they gave everyone a sense of security in these difficult times, where security is a number one concern in New York.  Holiday cheer was all around us as we watched with anticipation for the next balloon or marching band came down the street.

There was a special reason I wanted to attend this years parade.  You see my cousin is Neil Diamond and I was his first photographer back in the 1960’s.  My images appeared on his first album cover as well as others. Over the years my works were used for millions of concert programs, albums, sheet music and presentations because they were considered the early iconic photos of this great start.  We were going to meet Neil after the parade for a family reunion of sorts.

There were so much happening at the parade with so many personalities including robots that started the parade made by the students that built them.  Some of the stars of the parade included: Carrie Underwood, Kellie Pickler, Goo Goo Dolls, Joan Jett and the Blackhearts, my favorite Kristen Chenoweth.  Performances from the Sound of Music, Jimmy Fallon & The Roots, Mannheim Steamroller and so many television and film stars, this was to be the best parade ever.

Some of the crowds favorites was obvious.

We have decided to include a great video that you will enjoy, it is the bulk of the parade’s broadcast on NBC with Matt Lauer, Savannah Guthrie and Al Roker.

This past year IMPress Magazine has begun to shoot more videos and less photos.  With over 140 videos now on YouTube, we are developing a strong following and feel that if a photo is worth a thousand words, then our videos will be worth a million words.  Visit our YouTube channel and see what we are doing.  See you next year…

I just wanted to add a personal note…Thanksgiving for our family is so important. It gives us a chance at least once a year to gather the family and give thanks for all of the blessings.  We usually travel out to Long Island to join our family at my nieces home. She picked up the baton from her mom who used to host the family for years at her home, but alas, my brother passed away at an early age, their home was sold and her daughter decided to keep the family tradition.  With the arrival of a new baby in her family a few years ago, I took a shot that I think shows the joy we felt that year as we welcomed a new addition…not the turkey the baby Addison into our family.