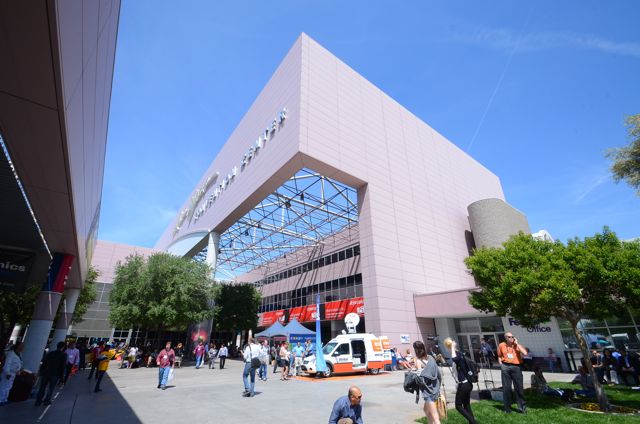 [dropcap]T[/dropcap]he world’s largest electronic media show covering filmed entertainment and the development, management and delivery of content across all mediums. With more than 90,000 attendees from 151 countries and 1,500+ exhibitors, NAB Show is indeed the ultimate marketplace for digital media and entertainment and we were there.

Although my normal beat is covering many of the key trade and consumer shows in the New York area, I had the opportunity to cover this show and what a show it was.  NAB reported an uptick in exhibitor participation and an almost 10-percent increase in size over the past years show. The event comprised 1,600 exhibitors spanning 815,000 net square feet of exhibit space, up from 1,550 exhibitors occupying 745,000 net square feet in 2011.

Although I thought I was prepared to cover this show, thinking it would be like a typical show at the Javits Convention Center in New York, I had no idea of the size and the scope of this show, it was Ginormous!  I had two days to try to get a glimpse of what is new and for me the easiest way to start was to visit the Manfrotto Distributions section of the show.  Manfrotto is an IPA sponsoring company and has been a friend for a number of years and we usually know what the new products are, but they got us again and had some exciting new products being shown at the show for the first time.

Manfrotto showcased some hot new products including their new DSLR remote that clips onto a video head handle and enables fast and accurate focusing of your lens to some new items from their video division including a great new monopod with a fluid cartridge in the base that will provide silky smooth action. Of course our friend Doug Feldner, Manfrotto product manager for Kata Bags showed us their new Light Weight Series of lighting equipment cases and provided us with proof that they would withstand any type of abuse, strong and light as you will see in our video.

Because there was so much to show and we didn’t want to end up with a 40 minute show video, we broke our NAB Show review into a number of parts.  You will see a great review on some of the Mics we loved at the show and a complete article on selecting the proper sound equipment for your DSLR by clicking here.  This article and review is meant to introduce some of Manfrotto and Kata’s new products that the advanced amateur and pro will find of great interest.  To keep my copy short, I am going to list some of the items you will see in this video here and then ask you to watch the video, click on the links that will take you to those products on the Manfrotto web site and get the complete info there. Many items will also have some great videos to watch that will show you in detail a bit more about each. One of the next articles we will be working on will be a general show review and one that showcases some great LED Lights.

Read them all to understand just how vast this show was and why you need to allocate some funds to update your tired gear.

With the piling system, portability is at its best! Lock them together to save room in the studio or carry them in a compact case to easily bring them with you for outdoor shooting. The new baby stand is even able to stand up when it’s closed. I have used these and can tell you that taking these on location or storing in your home or studio makes it worth the investment…..more

I tested and ended up being gifted one of the great Manfrotto fluid monopods. This  family is the world’s first product designed to help videographers achieve superior image quality. An innovative fluid cartridge has been incorporated into the base of the monopod for incredibly smooth, jump-free panning actions. The three pivoting, retractable feet ensure a firm footing.

The 561BHDV-1 is a compact but incredibly high 4-section aluminium fluid monopod. It is equipped with a fluid head (701HDV special version) including a new long sliding plate. The ergonomic pan bar allows smooth panning and tilting movements.

You will see footage I shot of Mike Gelman and Doug Feldner while using my new fluid monopod with the 561BHDV head.  I will never shoot a trade show or event without mine, it is wonderful….more 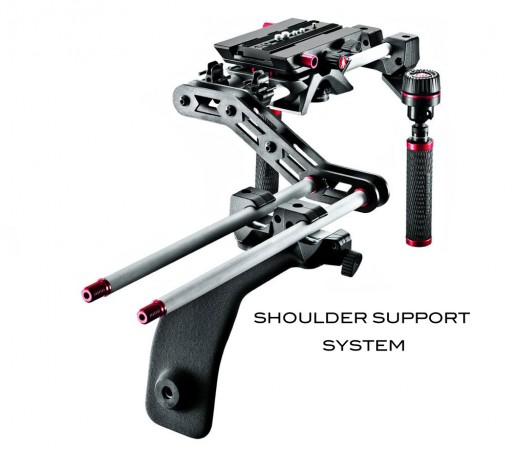 SYMPLA is a fully customisable component rig system, but a limited number of pre-configured kits is also available to provide ”off-the-shelf” answers to the most common requirements for HDSLR rigs. The Shoulder Support System is one of these kits, and allows support of camera equipment on the shoulder, with swivel-joint Adjustable Handles for both hands. A Horizontal Offset element helps place the Variable Plate (to which the camera is attached) in front of your eye while shooting for better, more comfortable control of framing. The Shoulder Support is ideal for use with Manfrotto’s new HDSLR Remote Controls, which put camera functions at your fingertips while letting you keep a firm grip on both handles. See their videos and read more about this great system…more 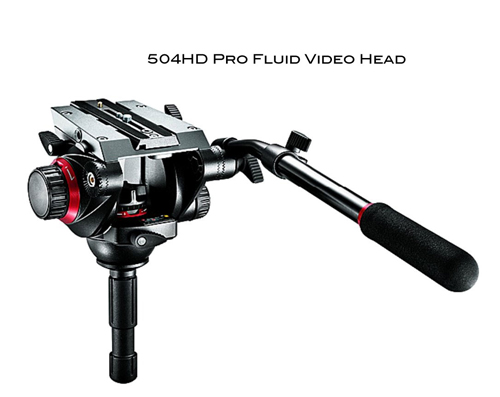 This is Manfrotto’s latest video fluid head. It is a perfect balance of design and performance. The bridge design improves the head’s rigidity and its PAN friction control is fast, simple to fine-tune and protected from knocks. All structural components are made from aluminum, with the PAN axis rotation unit using ball bearings to obtain smooth, totally vibration-free controlled movements that can be directly adjusted using the head’s FDS variable friction system. FDS on both the PAN and TILT axes also ensures that the head works perfectly at all temperatures, with all types of equipment and under all loads. Ergonomically improved lever and dial designs combine with the new friction index to give you complete control over the 504HD….more 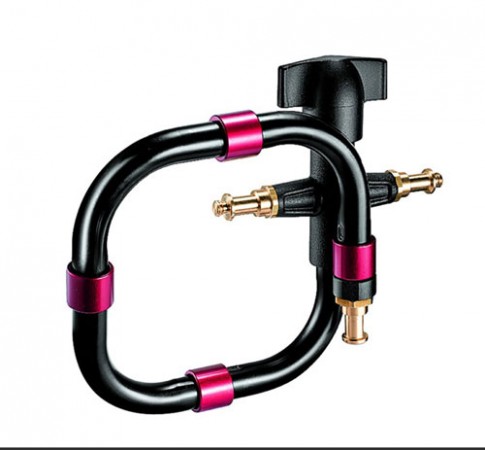 For years Manfrotto has been known for their “arms” and are probably the most used photo accessories in the world. You may have thought nothing new could top their existing line, until you see their new Snake Arm.  The Snake Arm is designed to hold a light fixture or camera in place, in a variety of situations. It will delight pro photographers, amateurs and videographers thanks to its flexibility, lightness and compactness….more 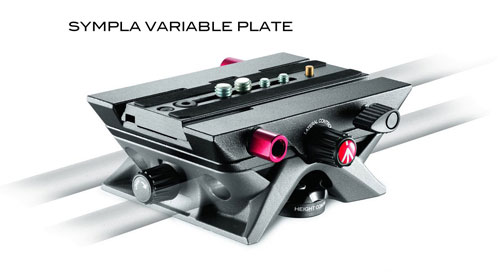 This is a professional rig system that removes the complexity present in so many others: they reduced the variety of components and streamlined the system without limiting what can be done. At the heart of the SYMPLA system is the Plate, which attaches your camera to the SYMPLA rig. To allow camera and lens to be positioned on the longitudinal axis, the Fixed Plate slides along SYMPLA Rods and is unlocked and blocked in place with a single repositionable ratchet lever. See all the components that make up the SYMPLA system, truly the pro’s best rig system in today’s competitive market….more 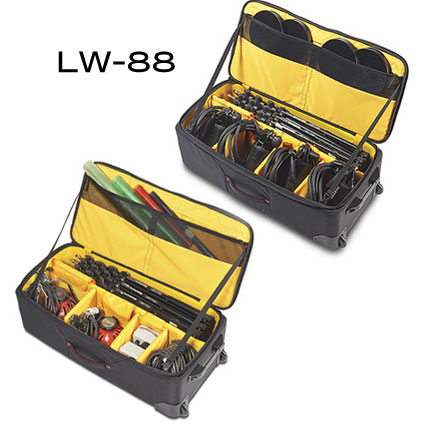 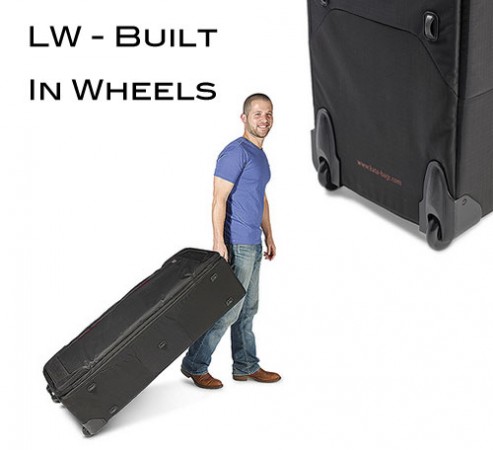 The LW-Series is their rolling organizers, built to hold a variety of video or photo lighting kits. The LW-88 their medium case can fit 2 flash units or monoblocs, a pro power unit and lighting stands, or 3-4 medium spot lights with 3-4 lighting stands (depending on their sizes). This case is designed to withstand harsh use in any environment and incorporates KATA’s signature Lightweight Protection technologies and materials to guarantee the highest level of protection in the lightest case to date. The case features two full sized compartments: The first deep compartment holds the various lights and stands, diffusers, umbrellas, etc. and the second shallow compartment holds related accessories such as cables, light domes etc. It can also be used for lighting stands and umbrellas.

All bags come with built in wheels and are extremely strong as you will see in our show video.  There are three sizes available, the Medium LW-88, LW, the LW-97 Large and the LW-99 XLarge bags….more