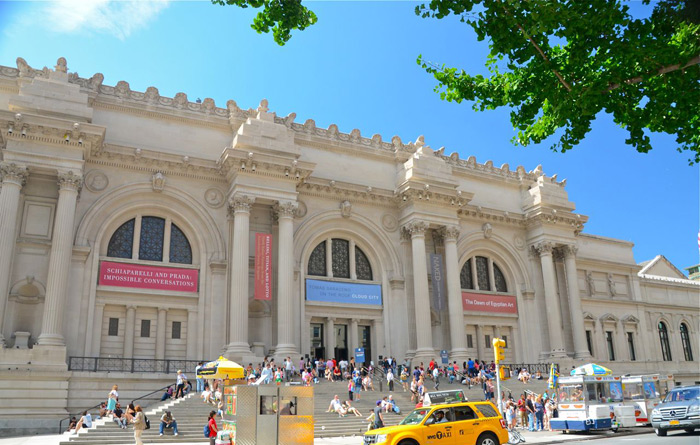 An exhibition exploring the rich interactions between pictorial and garden arts in China across more than 1,000 years will be on view at The Metropolitan Museum of Art beginning August 18. Showcasing more than 60 paintings as well as ceramics, carved bamboo, lacquerware, metalwork, textiles, and contemporary photographs—Chinese Gardens: Pavilions, Studios, Retreats will be displayed in eight galleries encircling The Astor Court, a Chinese garden that is modeled on a 17th-century scholars’ courtyard in the Garden of the Master of the Fishing Nets in Suzhou. After more than a year during which the Museum hosted several major loan exhibitions in its galleries for Chinese painting, the installation, drawn entirely from the permanent collection, features many of the Metropolitan’s most important paintings.

In conjunction with the exhibition, a variety of programs will be offered. These will be highlighted by a staging in The Astor Court (now sold out) of the classical Chinese opera Peony Pavilion, developed and directed by celebrated composer Tan Dun. The November 30 performance will be simulcast in the Grace Rainey Rogers Auditorium (see Related Programs section below for details).

In the densely populated urban centers of China, enclosed gardens have long been an integral part of residential and palace architecture, serving as extensions of living quarters. The preferred site for hosting literary gatherings, theatrical performances, and imaginary outings, gardens were often designed following the same compositional principles used in painting. And as idealized landscapes, gardens often drew inspiration from literary themes first envisioned by painters. Not only were painters often recruited to design gardens, but as gardens came to be identified with the tastes and personalities of their residents, artists were also called upon to create idealized paintings of gardens to serve as symbolic portraits intended to reflect the character of the owner.

Palaces
Organized thematically, the exhibition will illustrate how garden imagery has remained an abiding source of artistic inspiration and invention. It will open with a spectacular 18-foot-wide vision of The Palace of Nine Perfections (1691) by Yuan Jiang (active ca. 1680-ca. 1730), presenting an imaginary panorama of a 17th-century palace so grand that the emperor had to ride on horseback between pavilions. Meticulously rendered and sumptuously embellished with rich mineral colors, this screen-like set of scrolls must have been commissioned to adorn the grand reception hall of a wealthy merchant’s home in Yangzhou, the cosmopolitan city where Yuan Jiang worked. Juxtaposed with Yuan Jiang’s fantasy are paintings, an embroidery, and carved red lacquers, depicting auspicious narratives set within palace gardens. In many of these works depictions of young boys at play reflect the perennial wish for male offspring to carry on the imperial line. In each case, an ornate balustrade, imposing garden rock or plant, or finely garbed figures synecdochically indicate the palace setting.

Pavilions and Paradises
Landscape in China has always had a human dimension. Consequently, architecturalelements, particularly pavilions, are a quintessential feature of both Chinese landscape paintings and gardens. In gardens, pavilions identify prime vantage points from which to view the scenery; they also serve as focal points within landscape settings. In painting, the meticulous “ruled-line” renderings of pavilions celebrate historical or literary structures or indicate the fabled dwellings of the immortals—particularly when set within an archaic “blue-and-green” landscape meant to evoke an archaic “golden age.” Yuan Jiang’s gemlike fan painting, Palaces of the Immortals of 1753, is a dazzling example of the longevity of this theme. In Chinese lore, such paradises were imagined as the dwelling places of Daoist immortals. Mortals might stumble upon such magical habitations by losing their way, passing through a grotto or crossing a stream. In Liu Chen and Ruan Zhao Entering the Tiantai Mountains, for example, two men gathering herbs stumble upon a “lost horizon” where time stands still and the residents cease to age. When they seek to return home, they discover that seven generations have passed since their departure. In an actual garden, a moon gate or concealed passage might signal a similar entry point into an alternative world.

Secluded Temples and Reclusive Retreats
Buddhist and Daoist temples sometimes functioned as sanctuaries or resorts where harried city dwellers might find spiritual and physical sustenance, partaking of simple vegetarian meals, meditation regimes, lofty conversations, and strolls in the landscape. In the exhibition, Summer Mountains (ca. 1050) by a court painter features several such monastic retreats set within an awesome landscape; the painting’s orderly natural hierarchy, culminating in a towering central peak, was intended as a metaphor for the emperor presiding over a well-governed state. At the opposite extreme of such state-sponsored idylls was the ideal of the hermitage or rustic retreat as an expression of the desire to escape the pressures of politics or commerce. Set in remote corners of the landscape with no view of other dwellings, these imaginary havens embodied yearnings for quietude that were usually satisfied by a stroll in one’s garden. But in times of political turmoil, images of rustic dwellings conveyed the wish for a sanctuary. Serene enough to attract a wild deer or a crane, the childlike naiveté of such paintings as Wang Meng’s (ca. 1308-1385) Simple Retreat, which is featured in the exhibition, will reveal these visions to be unattainable fantasies.

Literary Gatherings
One of the primary social functions of gardens was to serve as settings for literary gatherings, where likeminded friends might celebrate the season, enjoy music, or view rare antiquities, and then compose poems to commemorate the event. The exhibition will include Elegant Gathering in the Apricot Garden, attributed to the court artist Xie Huan (act. mid-15th century), depicting nine of the most powerful officials in the realm who have gathered to enjoy painting, poetry, and other refined pursuits. Rather than being portrayed wielding emblems of political or military power, these men chose to emphasize their status as scholar-gentlemen, underscoring the fact that, in China, status derived from one’s command of cultural accomplishments. These same men were also responsible for calling a halt to Admiral Zheng He’s voyages of exploration—thus manifesting their belief that inward–oriented self-examination was more important than outward-looking exploration. Surrounded by oceans and deserts, and countries whose cultures they regarded as inferior, they saw China as a great walled garden, sufficient unto itself.

Gardens as Embodiments of Scholarly Ideals
Gardens have a long history in China, and famous gardens of the past—commemorated in painting and poetry—often provided inspiration to later garden designers. The exhibition will include Fisherman’s Lodge at Mount Xisai (ca, 1170) by Li Jie (ca. 1124-after 1191), who combined literary and pictorial references to two Tang-dynasty garden estates in his imaginary depiction of his own retirement home. He adopted a blue-and-green palette and created a naïve evocation of historical precedents as a way of demonstrating his scholarly credentials and disdain for mere craftsmanship. This amateur
monochromatic sketches of buildings to convey their ideals of unadorned simplicity. Wen Zhengming’s (1470-1559) illustrations of the Garden of the Inept Administrator(1551) provides another example of this in the exhibition—Wen’s austere depictions were less about the actual garden than about the rectitude and modesty of the owner.

Denizens of the Garden
One of the favorite themes of traditional Chinese painters was the careful description of the various fish, birds, and animals that typically inhabit imperial pleasure parks and private gardens. Rather than presenting these creatures in their natural habitats, Chinese artists favored celebrating the collecting of rare fish, fowl or pets within these manmade microcosms. These tame creatures were thus available for minute study and careful rendering by court painters who made a specialty of “feathers and fur.” On view will be The Pleasures of Fishes (1291) by Zhou Dongqing (active late 13th century) and Finches and Bamboo by Emperor Huizong (1082-1135; r. 1101-25).

A Floral Calendar of the Seasons
Paintings of landscape and flowers constitute two leading Chinese painting genres. In addition to serving as seasonal markers, many flowers have deep symbolic associations; for example, in 13th-century China, naturalistic depictions of lotus in different seasons evoked the ephemeral nature of physical beauty. In the exhibition, the Lotus and Waterbirds (ca. 1300) will be presented side by side with a contemporary photograph Wind in the Lotus at Yeast Courtyard (2004) by Lois Conner (b. 1951, U.S.A.), who chronicled seasonal changes creating horizontal or vertical compositions that recall Chinese pictorial precedents.

Related Programs
In conjunction with the exhibition, the Museum will offer a roster of education programs. Among them are five performances—now sold out—of the 16th-century opera masterpiece The Peony Pavilion, a 70-minute version developed and directed by celebrated contemporary composer Tan Dun in The Astor Court, the courtyard modeled on a 17th-century garden. Although the performances in The Astor Court are sold out, tickets are still available for a live, high-definition simulcast of the first performance, on Friday, November 30, at 7 p.m.

Made possible in part by the US-China Cultural Institute.

A related program entitled A Conversation with Tan Dun: A New Peony Pavilion on an Old Context will take place on November 29. In this conversation, Tan Dun will discuss his vision for restaging the classic opera with Maxwell Hearn, curator of the exhibition Chinese Gardens, who is also the Douglas Dillon Curator in Charge of the Metropolitan Museum’s Department of Asian Art. Tickets are $25.

Made possible by the C.F. Roe Slade Foundation.

Additional programming related to the exhibition include gallery talks and a Sunday at the Met afternoon program on September 23, featuring a lecture by Maxwell K. Hearn, Human Landscapes: Gardens in Chinese Art, that will examine how gardens have been an abiding source of artistic invention while their portrayal in art was often intended to reflect the character of the owner.

An audio tour, part of the Museum’s Audio Guide program, is available for rental ($7, $6 for Members, $5 for children under 12).

The exhibition will be featured on the Museum’s website at www.metmuseum.org.