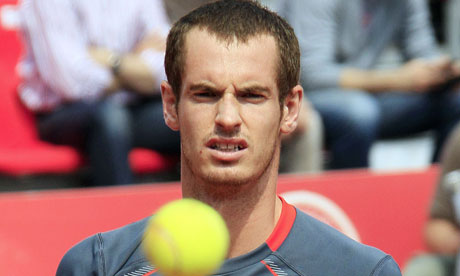 Roland Garros, Paris – Andy Murray had his supporters and team biting their nails and watching the start of the Scot’s match with concerned faces after he stumbled, winced and limped his way through the first set and a half of his match against Jarrko Nieminen, but in just over 3 hours, the world No.4 fought back to book his place in the third round with a 1-6, 6-4, 6-1, 6-2 win.

There were concerns from the onset about Murray’s physical state as after the first game Murray was serving and winced after moving back down the court to hit an overhead. It was unclear as to whether the discomfort was due to his knee or his back as he bent over and let out a yelp.

Later in the set during his service games, Murray barely completed a full service motion with limited movement of the back and little pace. He hit a heavy forehand at 0-3 down and immediately after he keeled over – and Nieminen would have been forgiven for thinking that he would make it into the third round by default after taking the first set 6-1 in only 37 minutes.

The default did not happen and the Scot battled on through the first set and a half and appeared to be down and out, but with resilience and determination to continue the world No.5 put the wheels back in motion to fight through the pain and turn the match back around.

During the third set, Murray began to serve better, his movement improved, forehands were heavy and he showed that he was able to slide into his shots more.  There were occasional flashes of brilliance during rallies but they were clearly not consistent due to stiffness.

After match point, as Murray approached the net, he took off his hat, rubbed his eyes and clearly looked emotional as he shook hands with Nieminen.  The outcome of today’s performance has created serious questions – is his back more serious than he has let on?

Murray told us during his press conference in Rome that he was experiencing difficulties with his back which he had been suffering with for a while – and clearly it was something which was still causing a hindrance in his match today.  At the start of the match, Murray’s movement was hampered, he was clearly nervous, his back was tense, but after the trainer was called, he received a massage and he loosened up a bit, relaxed and hit the ball without any pressure. In Rome he addressed how important it was for him to get some wins under his belt:

Nieminen was clearly distracted and angry by the events on court and may have preferred Murray to continue or quit without having to guess what was going to happen.  His implosion and mental break down contributed to the loss of the next three sets and confusion set in as to what was the problem with Murray and of course anger at the events of the match.

Murray’s expectations may not be as high after that match as it is apparent that his ailments are affecting his game and performance – something which he will want to remedy before playing on the green grass of Wimbledon and the AEGON Championships where he will be aiming to defend his title.

In his third round match at Roland Garros he will face Santiago Giraldo of Columbia who defeated Bernard Tomic.  Murray’s biggest fear may be his physical state rather than the match up as he may take solace in the fact that he beat Giraldo comfortably a few weeks ago on clay in Barcelona.