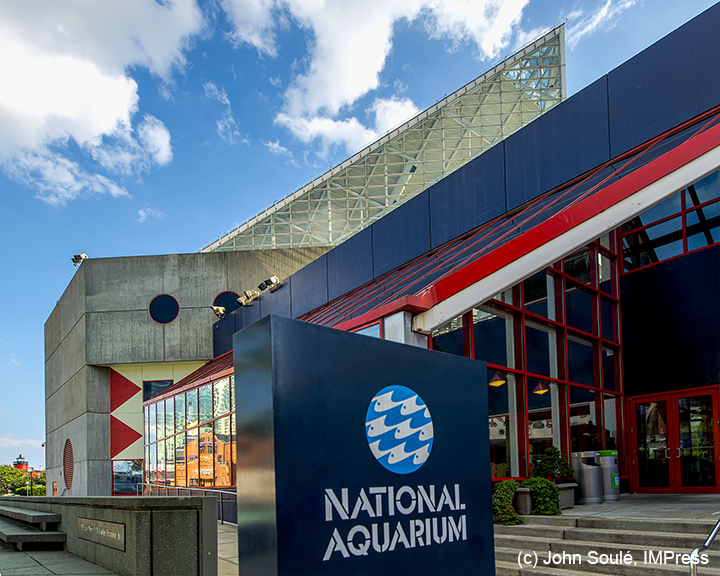 “Feel your heart race as a pack of 5-foot-long Blacktip Reef sharks speeds towards you.  Take a deep breath as you witness the rise and fall of a 5-foot wide whiptail ray’s massive fins beneath your feet.  Explore deeper and spot an ornate Wobbegong shark camouflaged against the reef bottom. “

This is how the exciting new 12.7 million dollar exhibit that is under way the National Aquarium in Baltimore was described in a recent press release.

The new exhibit is set to open in the summer of 2013 and will replace an aging saltwater exhibit – Wings in the Water.

According to Kate Hendrickson of the National Aquarium, “This coral-filled exhibit, replicating a salt-water Indo-Pacific ocean habitat, will feature animals new to National Aquarium, including Blacktip Reef sharks, reticulated whiptail rays and ornate Wobbegong sharks, as well as some of National Aquarium’s most beloved animals, including Calypso, the 400-pound green sea turtle, and zebra sharks Zeke and Zoe”.

It was also stated that the addition will include a a floor-to-ceiling “pop-out viewing window” that will allow guests to “step inside the exhibit and come face-to-face with the magnificent animal species and corals.”

“Blacktip Reef is going to be an incredible addition to National Aquarium and one that will continue to inspire guests to preserve and protect our oceans,” said John Racanelli, National Aquarium CEO. “People travel around the globe to experience reefs in the Indo-Pacific region. Come next summer, they won’t have to travel nearly as far to experience some of the world’s most beautiful and essential aquatic treasures.”

As impressive as all this is, the focus of this article, however, is not the exciting new facility but rather the actual move of some of its inhabitants that was necessary to get this project underway.

In early September, the first step was to clear the existing Wings in the Water exhibit of all marine life – and this was not an easy task.  The residents, in addition to fish and rays, also included two zebra sharks and a 400-plus pound sea turtle affectionately called Calypso after Jacque Cousteau’s famous ship.

Some of the residents were to remain in Baltimore while the barracuda and some rays were to be transported to the Georgia Aquarium and to Ripley’s Aquarium.

In each case, specially designed portable tanks would need to be in place that could transport each of the marine life safely.

For the longer trips outside of the facility, a specially designed transport vehicle would be used that was equipped with a large tank and pumps.

There was one exception however, as explained by Mr. Andy Dehart National Aquarium Director of Fishes & Aquatic Invertebrates.  Since turtles can breath out of water, a tank would not be needed for that move but rather a large tire would be used for transportation within the Aquarium. The tire would provide a surface for the turtle to lay across, keeping the flippers off the floor and provide support that would be less stressful for the turtle. It was clear that the first concern was for the safety and comfort of of the turtle.

The plan was simple – select each of the marine life to be moved and then determine the best way to capture and transport them to their new home.  For the smaller marine life, scuba divers with simple nets would work well.  But in order to move the larger marine life, the plan was to have several scuba drivers take to the water and ‘gently’ encourage each of the selections into a large sling that would then could be attached to a winch and hosted out of the tank.

This whole process took place over a period of serval weeks.

For the protection of handlers, the rays’ stinger had to be removed where the venom is concentrated. 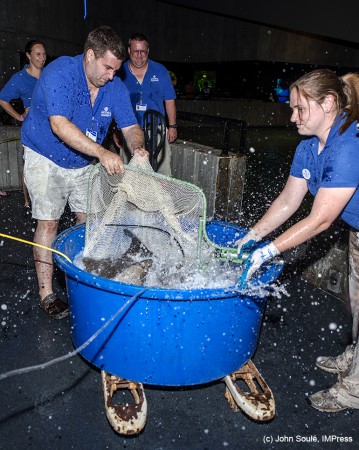 As seen below, after each of the larger marine life was captured in the sling, the growing crowds would applaud.  The divers had their hands full, so to speak, at times.

The biggest of the marine life at the National Aquarium was kept for last.  This was time to move Calypso. Divers used lettuce to attract the huge sea turtle into a position that would allow them to place a large sling underneath.

As always, the safety, care and comfort of the marine life was of upmost importance which became quite evident from the amount of preparation and involvement of staff  that was on-hand to ensure a smooth execution of the plan.

Now with the water drained, the building begins. Once completed, the tank will contain approximately 2,700 replicated coral pieces, with 15 different species of marine life including a variety of sharks (featuring the Blacktip Reef Shark), rays, the 400-plus pound sea turtle Calypso and both zebra sharks – Zeke and Zoe.

This really will be quite an exhibit when it opens next year in Baltimore.  If you are in the area – I would highly recommend stopping by.

Video Recap Courtesy of the National Aquarium of Baltimore.