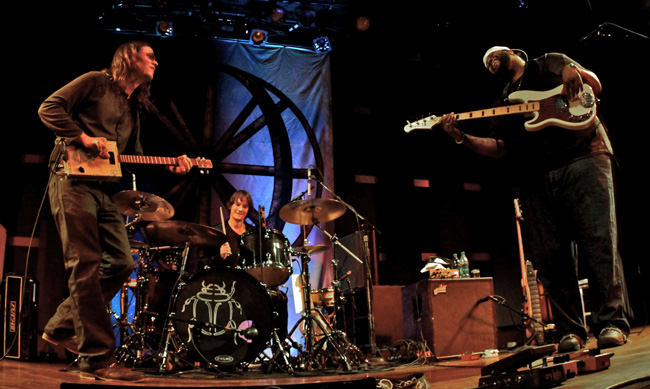 [dropcap]T[/dropcap]he passing of one’s father can be a life altering experience, especially if the bond between father and son is tightly sewn and the family center is strong.  The effect can be felt even deeper if something more is shared that brings them closer, like a family business or common artistic talent.  Both are the case for the Dickinson brothers of the North Mississippi All-Stars, whose family talent and family business are one in the same, music.

Luther and Cody Dickinson of the North Mississippi All-Stars (NMA) lost their father, the famed producer and keyboardist, Jim Dickinson in 2009.  It was only months before when 37 year-old Luther had become a father of his own.  For him, it was a time for reflection to say the least.  In a very candid interview for the PBS TV show, On Canvas, (airing this summer) Luther Dickinson spoke on his career, the effects of his father’s passing, the state of his band NMA and the future of his music.

The PBS show’s Producer Steve Kwasnik said, “Luther was a very gracious guy with deep emotions for his family ties.  His Father’s passing around the same time his daughter was being born was truly a circle of life effect that you could see was really still hitting him.”  Kwasnik continued, “Luther appreciates the past and future. His willingness to be very open in his interview allowed us to not only do a review of the band’s music but also a retrospective of his father, Jim Dickinson’s life career and the influence he had on his sons which extends now in their band, NMA.”

[box_light]PBS Gains Access to NMA Live[/box_light]
The PBS show is aired by WHYY on Thursdays at 10pm.  It is a live concert format interwoven with in-depth interviews of the featured artist.   “We never know how the show will be presented until all the elements are recorded from the live performance to the interview.  In this case, we decided to form the show around a musical family’s love for their father and it became a bit of a tribute to Jim Dickinson,” said Kwasnik.

Jim Dickinson was a Memphis based session musician who had a storied career. He played with such artists as Bob Dylan and the Rolling Stones, as well as producing scores of musicians from Ry Cooder to G Love & Special Sauce.  His sons, Luther and Cody, grew up around him and this rock and roll influence as kids.

When Jim moved his family to Mississippi, the boys formative years were then further influenced by live jams in the juke joints of Northern Misssissippi hill country. They learned straight from blues-roots legends like Otha Turner, Junior Kimbrough and R.L. Burnside who all were finally just gaining fame during a 1990’s resurgence in blues music popularity.

In 1996 with bassist, Chris Chew, Luther and Cody would form the North Mississippi All-Stars as a ‘hill country blues-based rock-roots sound.’  Chew would bring a gosphel and funk edge to the band who with the Dickinson’s upbringing are maybe the truest extension of real blues-rock roots one can find in today’s music.  Their peers have noticed. The band has notched four Grammy Nominations for Best Contemporary Blues Artists or Album of the Year.

Three of the nominations came with their first three albums straight.  Since that time, NMA has seen the world. They’ve toured and/or recorded with major acts from the likes of the Allman Brothers to Oasis and Dave Matthews.  A hard working band they headline their own tours almost non-stop with loyal followings around the globe and often have played over 300 dates in a year.

The On Canvas show’s producer, Steve Kwasnik, said, “As a PBS entity with WHYY we are always looking for unique, dedicated and special artists. NMA has the resume’ hands down with the Grammy nominations  and musical accomplishments etc. but what sets them apart is that they are the real deal.

They were born near Memphis’ music scene then grew up in the Mississippi Hill Country so they have a rock band edge yet keep true to their roots which they learned from original blues masters.  They are able to play home made instruments like washboards and Diddley Bows and cigar box guitars and use them in a modern way of song with electric pick-ups.  It is something you just don’t normally see.”  Kwasnik continued, “It is a conscious choice Luther trys to make when writing songs for NMA as well.  He now more than ever trys to balance the outside influences of touring around the world without losing his home culture’s influence on the NMA sound.”

[box_light] Father Unites Brothers and Band[/box_light]
Ironically it was during a period of the band being apart that their father passed.  Luther, who has become one of the top slide-guitar players in the world, had been working with the Black Crowes while brother Cody Dickinson and Chris Chew were with the Hill Country Revue.  Jim Dickinson had always told his boys, “You need to make music together. You will never be as good apart as you are with each other.”  That statement came to pass when a tribute concert for their father brought the band back together again.  From there they went back to the studio and produced the bands latest effort, Keys to the Kingdom.  The CD has a heartfelt down home vibe with lyrics that resonate feelings of life’s pain and progress in a variety of styles, some modern and some songs that age back to the band’s home old time roots.

In the PBS On Canvas, interview, Luther discusses how the strongest musical influences of his life were leaving him at the time of Keys to the Kingdom.  Junior Kimbrough, RL Burnside and now his father had died. However, their passing had brought him back home and re-launched NMA.  The On Canvas show is one of the more deeply researched and well-produced features done on the North Mississippi All-Stars life and career.  Viewers not only experience the band’s live performance but also get to learn more about who they are and where they are from.

In a recent Wall Street Journal story, Luther was quoted, “When my father passed away, I started to realize what made me unique—it’s the culture,” he said. “I’m a product of the Memphis musical underground in the ’50s, ’60s and ’70s. I decided I had to follow that muse down to the heart of it.”  His father Jim had told him and Cody, “Play every note like it’s your last.” In this program one truly feels that NMA heeds those words.  They are extraordinary live performers whose sound stays true to very special musical roots.

The show was filmed at one of the Philadelphia and Delaware Valley’s top music venues, the World Café.   You can see the 30-minute program online at: http://video.whyy.org/video/2235629161 and can learn more about NMA at their website: http://www.nmallstars.com/about.